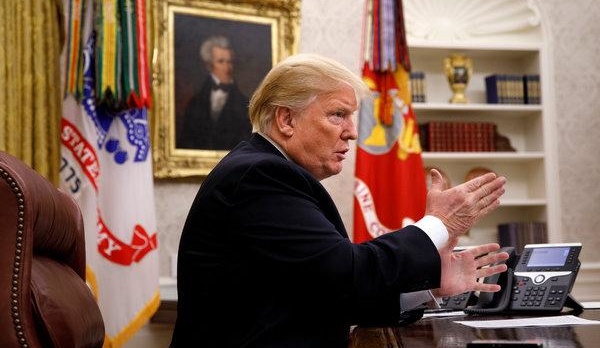 Donald Trump dismisses Republican-Democrat talks on border security and renews his threat of a national emergency, bypassing Congress to get $5.7 billion for his Wall with Mexico.

Last Friday, Trump retreated and called off his 35-day Trump Shutdown of the Federal Government, without a penny for the $25 billion Wall. Congress reopened agencies with three weeks of funding and embarked on discussions over border security.

But at the end of his statement last week, Trump added the threat of another shutdown or a national emergency. Throughout this week he has stayed out of the discussions, but put a series of lies and distortions as he insisted, “BUILD THE WALL”.

On Thursday, Trump followed more garbled and deceptive tweets with an interview with The New York Times. He dismissed the cross-party talks and provisions — agreed in Government funding bills which he rejected before and during the shutdown — such as more border agents, more judges to hear migration cases, infrared technology, and electronic surveillance.

If she doesn’t approve a wall, the rest of it’s just a waste of money and time and energy because it’s, it’s desperately needed. People are flowing in.

Trump then hinted at the national emergency declaration, under which he could take money from the Department of Defense for his Wall, “Ultimately I think I’ve set the table very nicely….I’ve set the stage for doing what I’m going to do.”

Trump fired out nine tweets, including a brief video statement, about The Wall and migration on Thursday:

Republicans on the Homeland Security Committee are wasting their time. Democrats, despite all of the evidence, proof and Caravans coming, are not going to give money to build the DESPERATELY needed WALL. I’ve got you covered. Wall is already being built, I don’t expect much help!

Trump supported his message with more lies and distortions. He tried to whip up fear of another caravan travelling from Central America — the “attempted Invasion of Illegals” — and implied that The Wall would stop Mexican murderers from crossing the border. He misrepresented a record-setting drugs seizure as justification for the 30-foot-high barrier.

Our great U.S. Border Patrol Agents made the biggest Fentanyl bust in our Country’s history. Thanks, as always, for a job well done!

In fact, the drugs were not found in the areas where a Wall would be constructed but at the US port of entry at Nogales, Arizona.