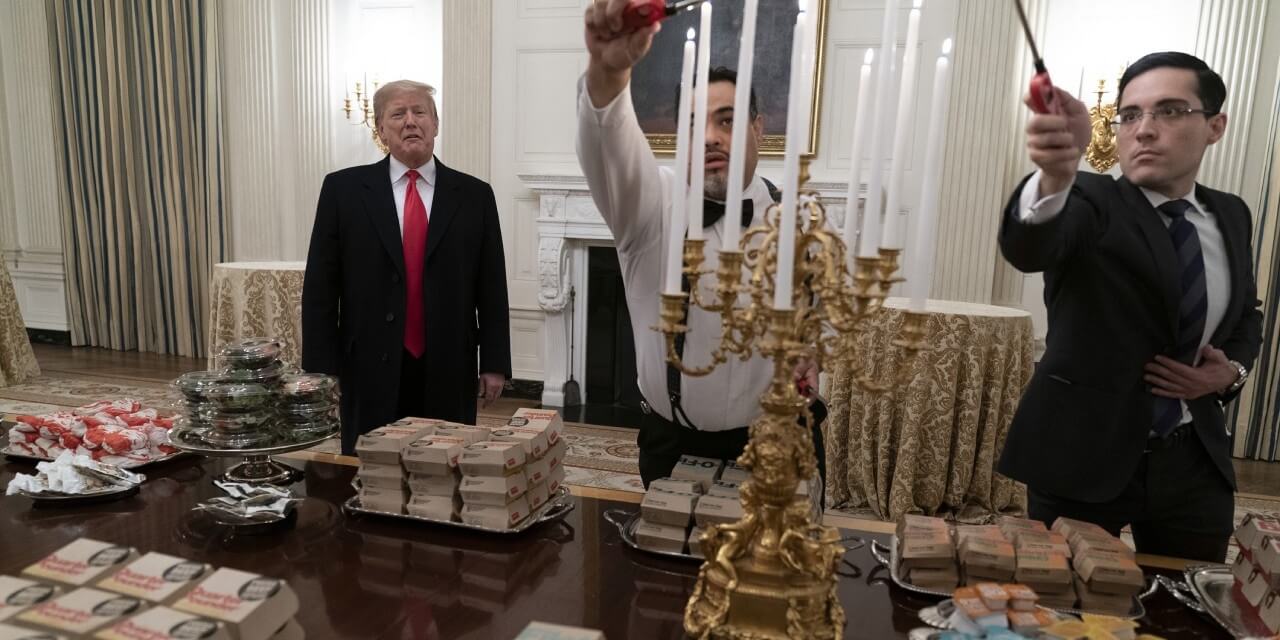 Donald Trump rejects a proposal to end his record-setting shutdown of the Federal Government on its 24th day.

Trump said on Monday that he pushed back a proposal by his ally Sen. Lindsey Graham to reopen the government for three weeks while talks are held on immigration and Trump’s demand for $5.7 billion for his Wall with Mexico.

Trump told reporters, as he prepared to fly to New Orleans to speak at a farm convention, said, “I did reject it.”

Trump did not suggest a way out of the shutdown which he said last week could last “months or even years”. Pulling back from the idea of bypassing Congress to divert funding to the Wall from other Government tasks, such as recovery after disasters, he said, “I’m not looking to call a national emergency. This is so simple you shouldn’t have to.”

Advisors said Trump is refused to allow his Acting Chief of Staff Mick Mulvaney to compromise on his demand for $5.7 billion.

Last week, in a meeting with lawmakers, Trump cursed Mulvaney for proposing a compromise figure between the $5.7 billion for the Wall and legislators’ offer of $1.3 billion for border security.

Just before the Government shutdown at midnight on December 21, Trump refused a unanimously-adopted Senate continuing resolution to fund the Government, with the $1.3 billion for border security. On January 3 the House, now controlled by Democrats, adopted a similar measure but Senate Majority Leader Mitch McConnell is refusing its consideration by the upper chamber.

Early this month Vice President Mike Pence, negotiating with Congressional staff, proposed $2.5 million for border security and unspecified provision for The Wall, but Trump overruled Pence and insisted on the full $5.7 billion.

The demand ensured that almost 800,000 federal employees remain on furlough or unpaid work. Millions of Americans could be affected through closure of public services, a halt to food stamps and tax refunds, postponement of farm subsidies, suspension of manufacturers’ exemptions from tariffs in Trump’s trade wars, and staff refusing to carry out duties such as airport security.

Trump emerged after he was shut away in the White House all weekend, tweeting and continuing falsehoods in a phone interview with his favored outlet Fox TV.

“I haven’t left the White House in months,” he said on Saturday night. In fact, he visited southern Texas last Thursday for a photo opportunity on the US-Mexico border, and he made a sudden flight to a US base in western Iraq on December 26.

Trump continued his Twitter barrage on Monday. Having said on December 11, “I will be proud to shut down the Government for border security,” he tried to shift blame to Democrats, who he claimed were vacationing in Puerto Rico.

I’ve been waiting all weekend. Democrats must get to work now. Border must be secured!

Trump also retweeted distortions from Republican National Committee chair Ronna McDaniel about drugs coming into the US and insisted, “I am doing exactly what I pledged to do, and what I was elected to do by the citizens of our great Country.”

Trump snapped back about media reports, from US officials, that he is unstable and isolated in the White House.

The Fake News gets crazier and more dishonest every single day. Amazing to watch as certain people covering me, and the tremendous success of this administration, have truly gone MAD! Their Fake reporting creates anger and disunity. Take two weeks off and come back rested. Chill!

Talking to reporters, he railed about revelations — from current and former officials — that the FBI opened a counter-intelligence investigation against Trump in May 2017, fearing he might wittingly or unwittingly be working for Russia.