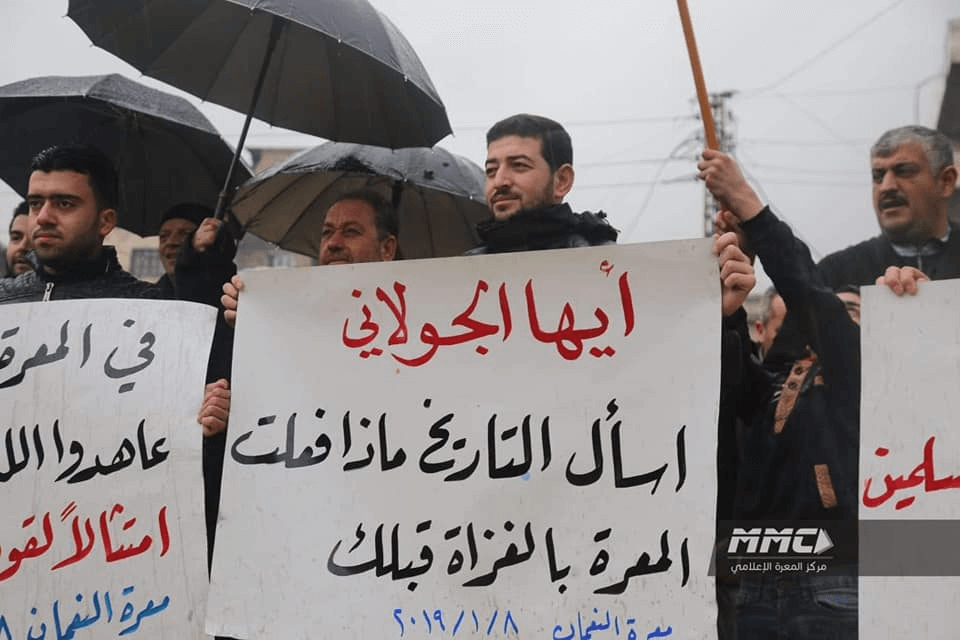 Reports indicate an agreement between the jihadist bloc Hay’at Tahrir al-Sham and the Turkish-backed rebel National Liberation Front recognizing HTS’s expanded control of territory in northwest Syria, in return for the removal of HTS roadblocks and dirt barriers in Idlib Province.

Ahrar al-Sham, once the largest rebel faction in Syria, is disbanding in its central area as the jihadist bloc Hay’at Tahrir al-Sham advances in the northwest of the country.

Spokesman Labib al-Nahhas announced the dissolution of Ahrar al-Sham, which had an estimated 25,000 fighters in 2015, the high point of the opposition’s control of territory in northwest Syria.

Officially, the disbandment is in northwest Hama Province, the heart of the faction’s operations since 2017.

Meanwhile HTS — which includes the group Jabhat Fatah al-Sham, known as Jabhat al-Nusra and linked to Al Qa’eda until July 2016 — has moved into another ten towns and villages in southwestern Idlib and northwestern Hama provinceson since Tuesday morning.

Ahrar’s decline began in 2017, as it retreated before an HTS expansion which took control of more than half of Idlib Province through its “Syrian Salvation Government”.

Fighting renewed more than a week ago, with HTS claiming that another faction had ambushed and killed five of its members. The jihadists seized territory in western Aleppo Province, effectively ending the Islamist faction Nour ed-Din al-Zinki.

On Tuesday, Ahrar al-Sham commander Jaber Ali Basha thanked fighters for “doing their duties” in northwest Hama but said that “war is gain and loss” and they must concede to HTS.

Turkey, whose forces are in the northwest alongside the rebel National Liberation Front, declined to intervene.

Syria Daily, Jan 6: The Fight for a Revolution Town in the Northwest

Almost all of Turkey’s 12 observation posts are now inside HTS-controlled territory as the jihadists also advanced in northwest Hama Province, including almost all of the Sahl al-Ghab desert area. HTS set up roadblocks and checkpoints on major routes connecting the remaining rebel positions across northwest Syria.

Residents in opposition areas such as Ma’arat al-Numan demonstrated against HTS on Tuesday. Signs addressed HTS leader Mohammad al-Joulani: “Hey Joulani! Ask history what we did to the invaders that came before you.”

Others spoke of “panic”. Abu Rami, a local government official in southwestern Idlib Province, said, “The people are in a state of fear.”

Turkey: We Pursue Offensive v. Kurdish Militia If US Withdraws

Turkish Foreign Minister Mevlüt Çavuşoğlu said Thursday that Ankara will launch an offensive against Syrian Kurdish militia YPG if the US delays a withdrawal of its troops.

“If [withdrawal] is put off with ridiculous excuses like Turks are massacring Kurds, which do not reflect the reality, we will implement this decision,” Çavuşoğlu told NTV television.

The statement continues Turkish rejection of US National Security Advisor John Bolton after his visit to Ankara on Tuesday.

Bolton, the Pentagon, and US agencies have pulled back Trump’s December 19 order — following a phone call with Turkish President Recep Tayyip Erdoğan — for the departure of all 2,000 US troops.

Angered by statements by Bolton and Secretary of State Mike Pompeo warning against Turkish attacks on Kurds, who hold 27% of Syrian territory, Erdoğan refused to see the National Security Advisor and instead told Parliament of Bolton’s “grave mistake” in demanding assurances over the Kurds before any US withdrawal.

Çavuşoğlu pressed the line in his TV interview, “It’s clear from the statements of Bolton and others that they don’t support the idea of a pullout.”

Speaking from Iraqi Kurdistan, Pompeo said, in response to a question if Erdoğan’s position puts withdrawal at risk:

We’re having conversations with [Turkey] even as we speak about how we will effectuate this in a way that protects our forces….

It’s important that we do everything we can to make sure that those folks that fought with us are protected and Erdoğan has made commitments, he understands that.