Iran Daily: Supreme Leader on Sanctions — “US Are 1st-Rate Idiots” 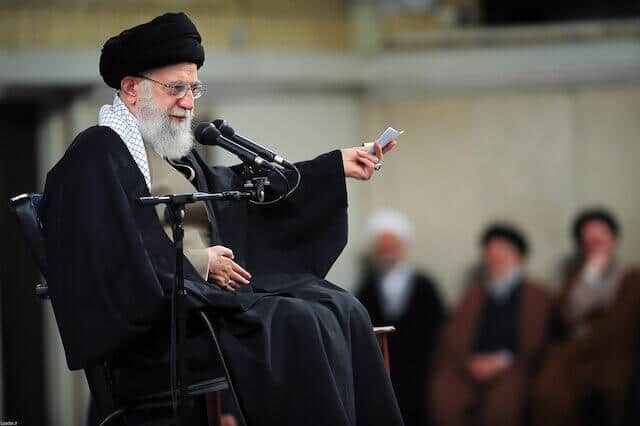 Supreme Leader speaks in Tehran to residents of holy city of Qom, January 9, 2019

Iran’s Supreme Leader has tried to show defiance by railing against US sanctions, saying the Americans are “first-rate idiots”.

The Islamic Republic is in the grip of an economic crisis, with long-term economic problems compounded by the US restrictions. Oil exports have fallen almost 60% since April, and non-oil exports were down 57% in December. The Parliament Research Center is projecting a recession of 2.6% to 5.5% by March 20, and the International Monetary Fund forecasts a 3.7% fall in GDP in 2019.

This week the Rouhani Government effectively gave up on links with the European Union to bypass the sanctions and improve the economic situation.

But in a Tehran address to residents of the holy city of Qom, Ayatollah Khamenei insisted:

The Iranian nation will, God willing, make [the US] suffer an unprecedented defeat in history….

The nation and authorities should attentively work to turn the American sanctions into an unprecedented defeat for the Great Satan, as was done during the era of Sacred Defense [the Iran-Iraq War of 1980-1988]….The nation and authorities used the sanctions as a means of [enabling] dependence on domestic capabilities and the flourishing of talents in a way that it turned Iran into the region’s unparalleled power today.

Khamenei used US National Security Advisor John Bolton as a prop for his declaration, noting Bolton’s statement in July 2017 to the National Council of Resistance of Iran — which has advocated the overthrow by any means of the Islamic Republic since 1979 — “Before 2019, we here will celebrate in Tehran.”

The Supreme Leader asserted: “A while ago, a US politician had said, among a gathering of terrorists and thugs, that he hopes to celebrate this Christmas in Tehran….Christmas was a few days ago. This is how US calculations work.”

Some US officials pretend that they are mad. Of course I don’t agree with that. Rather, they are first-class idiots….

Just as Saddam [former Iraqi leader Saddam Hussein] was sent to hell, our enemies will also be sent to hell.

Iran has confirmed the detention of American citizen Michael White.

Earlier this week, a former detainee confirmed that White is being held in a prison in Mashhad in northeast Iran. White’s mother said she lost contact on July 27, as the former Navy officer and his Iranian girlfriend were flying out of the country.

Another American Imprisoned in Iran

Foreign Ministry spokesman Bahram Qassemi confirmed White’s arrest, but did not specify when it occurred or any charges.

He said Iran had informed the US Government about the detention within days of it occurring “some time ago”.

The US State Department said it was “aware of reports”. White’s mother, who said she learned three weeks ago of the imprisonment, said the case is being handled by Switzerland, which represents American interests as the US and Islamic Republic have no diplomatic relations.

Two other Americans and foreign nationals such as Anglo-Iranian charity worker Nazanin Zaghari-Ratcliffe are currently held as political prisoners.