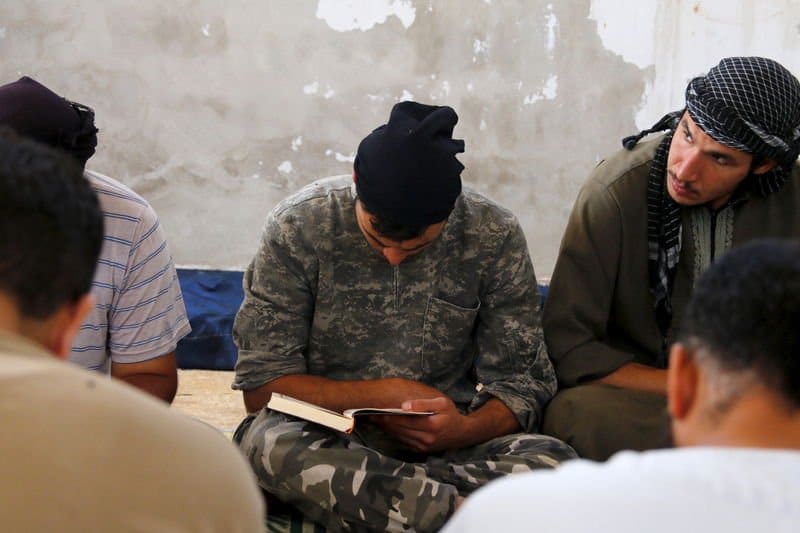 The defeat changed the pattern of military control across the province, almost all of which has been held by the opposition since spring 2015, and the political situation as HTS and its Syrian Salvation Government challenged the opposition’s Syrian Interim Government for authority.

This month Ahrar al-Sham is back, as one of the rebel factions pursuing a counter-offensive against pro-Assad forces in southeastern Idlib. But what lessons can be learned from its setback in 2017?

Ahrar al-Sham is considered the most important group among the Islamic movements. They survived many changes and conflicts over the years, even the strike on its complete leadership in Ram Hamdan on September 9 2014. So their dramatic collapse under the attack that Hayat Tahrir al-Sham carried out in the Aleppo and Idlib governorates from July 17 to 21, 2017, was surprising. Ahrar al-Sham’s leadership, besieged by HTS in the Bab al-Hawa border crossing, left its stronghold defeated because most of the groups assembled under the Ahrar al-Sham banner stayed neutral, or even opposed a clear stance against HTS in the conflict. This day marked a major shift in the history of Ahrar al-Sham.

For years, Ahrar al-Sham was one of the largest rebel factions in Syria’s 79-month conflict. It had the most members and weapons of any armed opposition group in the north of the country. It had social support from residents across areas in which it was present as a “local” choice in comparison to the foreign fighters of Jabhat al-Nusra. It was instrumental in the political maneuvers among those challenging the Assad regime, debating with both the Syrian National Coalition and other rebel factions over relations with external powers and the position on indirect talks with Damascus.

But in summer 2017, Ahrar al-Sham suddenly all but collapsed in the face of an offensive by the jihadist bloc of Hayat Tahrir al-Sham — led by Jabhat al-Nusra’s new identity of Jabhat Fatah al-Sham — in northwest Syria. HTS seized much of western Aleppo Province and Idlib Province, including the key Bab al-Hawa crossing on the Turkish border.

This analysis sheds a light on the political as well as regional factors that influenced the long lasting conflict, and discusses its impact on the future of Idlib and the Syrian revolution as a whole.

In the months before the HTS offensive, Ahrar al-Sham had travelled a political and legal path towards other elements of the Syrian Revolution. It worked with local governing structures and courts and adopted the “green flag” of the local uprising, setting aside the black flags with monotheistic script favored by jihadist factions.

The symbolism of the “Idlib is Green” campaign was considered by HTS to be a war cry, and the bloc also objected to Ahrar al-Sham’s adoption of the United Arab Law, upheld by institutions such as the Arab League as well as local group. When Ahrar al-Sham said it would only work with Syrians who are not listed as terrorists, Jabhat Fatah al-Sham leader Abu Mohammad al-Jowlani saw an unacceptable threat.

Ahrar al-Sham had been assisted in its transition by the departure of extremists for HTS. But Ahrar also faced the atrophy of its ideology with the deaths of its initial leaders and the absence of senior religious figures — the new commanders did not have the same base of followers inside the movement. The spring 2017 offensive in northern Hama Province was seen as a test for that leadership and its decision to remain neutral, in contrast to the involvement of [factions such as] al-Ghab and Suqour al-Sham, was questioned by many.

On July 14, HTS attacked the positions of Ahrar al-Sham in Jabal al-Zawiya and on Tal al-Tawgan, a hill overlooking the highway east of Saraqeb. Ahrar al-Sham’s forces around Saraqeb reached a truce with HTS that night, but HTS leader Abu Mohammad al-Joulani had tested the resistance and response of the rebel faction.

Four days later, HTS launched an assault on multiple fronts, from Jabal al-Zawiya in southern Idlib to Saraqeb in the center to the northern countryside. Initially, it appeared that the widespread scale of the attacks, large Ahrar al-Sham deployments, and popular opposition to HTS would blunt the offensive. However, on July 21 Ahrar’s leadership were trapped at the Bab al-Hawa border crossing with Turkey. They signed a capitulation agreement to withdraw from Bab al-Haw and pull back from other positions.

There had been fluctuations in HTS’s fortunes across the province during the battle. An HTS force moved from Tal al-Awgan to break resistance in Saraqeb; however, after popular protests, it accepted an agreement under which both it and Ahrar al-Sham left the town. Ahrar al-Sham maintained forces in Jabal al-Zawiya, the al-Ghab valley, and Shahshabow mountain could advance and chase HTS groups, but they were isolated after HTS took control of the international highway. Jarjanaz was besieged until a deal was signed under which some rebels effectively switched to HTS. In the northern countryside of Idlib, a traditional base of Ahrar al-Sham, the movement could maintain its presence, but there were battles in other areas such as Harem, Salqin, Ma’arat Masrin, and Ram Hamdan.

In western Aleppo Province, the Free Syrian Army was assisted by the breakaway of Nur ed-Dine al Zinki from HTS. An HTS attempt to break al Atareb was repelled by civilian demonstrations. However, Ahrar al Sham could not gather their armed groups to support the defense in Idlib or to attack HTS positions. The allies of the movement remained weak.

Some factions, such as Fastiqim and Jaish al Islam’s Idlib branch joined Ahrar al Sham. However, when al-Joulani threatened an attack on the town of Babesqa, Ahrar al-Sham and dissolved the groups after controlling their headquarters and evicting their commanders, except for a few members of Jaish al-Islam who stayed in the town.

With Ahrar al-Sham failing to organize an effective response, HTS closed the al-Ghab road, neutralizing southern Idlib, and reinforced. Its attack focused on areas surrounding the Bab al-Hawa crossing, such as Sarmada, Al-Dana, Aqrabat, and Babesqa. The strategy eventually constricted Ahrar al-Sham until it remained only at the crossing, where it would negotiate its surrender.

How did HTS leader al-Joulani overcome the breakaway of Nur ed-Dine al-Zinki, the refusal of other groups to fight, and the objection of the prominent cleric Abdullah al-Moheisini?

Joulani’s spearhead in the campaign against Ahrar al Sham was the hardcore military organization “army of Nusra”, led by Abu Husain (Muhammad Husain al-Khatib), a Palestinian-born doctor from Jordan. The army included Egyptian religious leaders and was supported by foreign fighters, including Chinese Turkestan troops who broke into Salqin.

Even with the foreign allies, Joulani probably had less than 1,500 men to fight Ahrar al-Sham. However, he countered the shortage by keeping much of Idlib Province neutral: many areas with a strong Ahrar presence — especially al-Badia and the northern countryside — did not fight because of agreements between Joulani and local figures. Controlling the nexus of roads in Saraqeb, Daret Ezza, and Harem, Joulani moved his forces to the central battle at Bab al-Hawa.

While Ahrar al-Sham had far more fighters spread across Idlib, as well as support from communities, its battalions were separated without a central chain of command and organization. The movement did not have a core force comparable to the “army of al-Nusra”, except for 800 fighters from al-Ghab and Hama stationed around the Bab al-Hawa gate. It did not integrate recently-joined FSA groups, instead dissolving them in Babesqa. Effective units such as Suqour al-Sham in Jabal al-Zawiya and the al-Ghab groups in the northern Hama countryside had to face al-Joulani without central backing.

After years of conflict between the revolutionary and jihadist view, Ahrar al-Sham had adopted the local moderate identity, but it had not established a coherent organization, built a central military force, or benefited from alliances with FSA factions. The movement had not found an alternative for its ideology to build on the potential of local support. Instead, Ahrar al-Sham rested on the false “superiority” of its large number of fighters.

From the first day of the HTS attacks, there were suggestions that groups from the Euphrates Shield operation, backed by Turkey’s military intervention from August 2016, could intervene from northern Aleppo Province. Free Syrian Army factions prepared to move, but no orders were given. The failure was blamed on Ahrar al-Sham’s opposition to the talks in the Kazakh capital Astana, where Turkey was discussing possible co-operation with Russia and Iran on “de-escalation zones”.

With no prospect of salvation, Ahrar al-Sham presented its surrender of July 21 as an agreement in which it could retreat safely from Bab al-Hawa, swap captives with HTS, and return to lost regions. Joulani did not press for a total defeat of Ahrar, preferring to consolidate his gains and to take over civil administration; However, he discreetly made further advances by take other border crossings with Turkey and seizing Ahrar’s stores and positions in Ma’aret Mesrin, Daret Ezza, Kafer Roma, and Ram Hamdan. Further agreements allowed Ahrar al-Sham leaders to retreat to parts of Idlib, northern Hama, and western Aleppo, while Joulani continued the quest to take over civil institutions and to fight the spearhead of Ahrar in Jabal al-Zawiya and al-Ghab.

On August 1, the consultation council of Ahrar al-Sham named Hasan Sufan as its new leader. Known as “Shadi al-Mahdi” on Twitter, Sufan spent 12 years in regime prisons and is a prominent jihadist highly respected by Ahrar’s past leadership. But despite Sufan’s advantages and his moderation in comparison with ISIS and HTS, the appointment seems to be a step back, giving the appearance of an ideological strengthening while buying tie.

An appointment of a new leader could not overtake the events of July 17-21 that changed the map and future of Idlib Province. This was a setback even greater than the deaths of Ahrar’s leaders in the bombing of September 2014. The movement recovered then, but can it recover now?