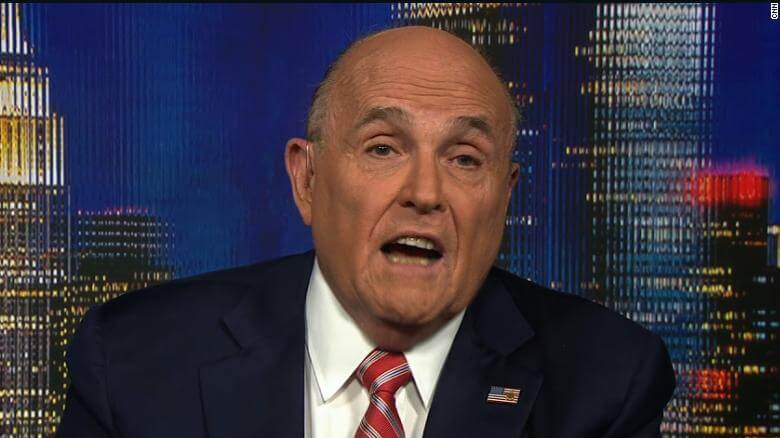 In a Wednesday interview, Giuliani — who has previously said that collusion with Moscow is not a crime — tried to redraw the line of defense, saying he had never acknowledged that collusion was between Trump personally and Russian officials.

Speaking with CNN’s Chris Cuomo, Giuliani said, “I never said there was no collusion between the campaign. Or between people in the campaign. I have no idea.”

He said it was possible that Trump campaign manager Paul Manafort had conspired with Russian operatives: “He also may have had an agenda of his own. Didn’t these guys owe him a lot of money?”

Manafort has been convicted of ten tax and fraud charges related to his activities as a consultant, including for pro-Russian Ukrainian politicians and businessmen. Prosecutors in the Trump-Russia investigation have accused him of passing poll data and discussing a pro-Russian “peace plan” for Ukraine with his business associate and former Russian military intelligence officer Konstantin Kilimnik.

Giuliani insisted that the only salient issue is whether Donald Trump was personally involved in hacking computer servers linked to Democrat Presidential nominee Hillary Clinton in 2016, or whether he paid others to do so.

There is not a single bit of evidence the President of the United States committed the only crime you can commit here, conspiring with the Russians to hack the Democratic National Committee….

Donald Trump wasn’t giving polling data to anyone. He did not know about it until it was revealed a few weeks ago in an article.

The former New York City mayor had previously said there was no collusion at all between the campaign and Russia, a line often declared by Trump.

“Democrats can’t find a Smocking Gun tying the Trump campaign to Russia after James Comey’s testimony. No Smocking Gun…No Collusion.” @FoxNews That’s because there was NO COLLUSION. So now the Dems go to a simple private transaction, wrongly call it a campaign contribution,…