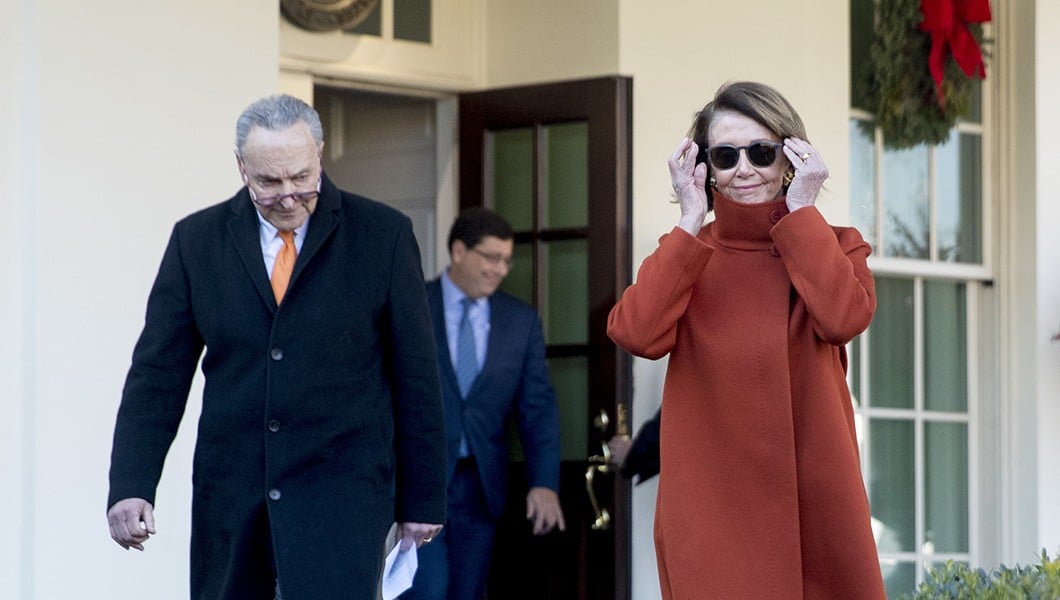 Challenged by top Democrat lawmakers, Donald Trump pledges to shut down the US Federal Government over his proposed Wall with Mexico.

Trump’s extraordinary move — taking credit for the closure rather than avoiding the shutdown or trying to blame Democrats for the damage that might ensue — came after he turned a private negotiating session into a televised appearance.

Trump tried to unsettle Pelosi by saying she did not have the support of colleagues, but she firmly responded, “Please don’t characterize the strength that I bring to this meeting as the leader of the House Democrats, who just won a big victory.”

Pelosi explained that, even with a Republican majority in the House for another few weeks, Trump did not have enough support for a budget including the Wall’s funding. Trump pushed back loudly, saying he could win the vote “within two seconds”.

Pelosi replied, “Then do it.”

Schumer said that Trump had called several times for a shutdown if Congress did not grant the initial tranche of money for the 2,000-mile Wall along the Mexican border, estimated to cost $25 billion.

Trump then announced that he was “proud to shut down the government for border security”. Agitated, he continued:

You want to know something? I’ll tell you what: I am proud to shut down the government for border security, Chuck.

I will take the mantle. I will be the one to shut it down — I’m not going to blame you for it.

Vice President Mike Pence sat stoically, even giving the impression at one point that he was asleep.

Pelosi said after the meeting, “This Wall thing…[is] like a manhood thing for him — as if manhood could ever be associated with him.”

She also said that Trump had made the false claim that, under the revised North American Free Trade Agreement with Mexico and Canada, the Mexicans will pay for the Wall. The Democrats explained that would never happen, with Trump insisting, “Well, they’re going to pay for it one way or the other.”

Trump campaigned in 2016 on the promise that Mexico would fund the barrier, but shifted last year to an emphasis on Congress providing the money.

Schumer and Pelosi said it is up to Trump to avoid the shutdown by embracing their proposals to postpone it for another year. This would come through six spending measures that are outstanding and extending homeland security funding for one year at its current level.

Schumer, who said Trump had “thrown a temper tantrum” during the meeting, told reporters that Trump later said “he would think” about the proposals.

Pelosi said Trump called her hours after the meeting to say he was reviewing the options.

Vice President Mike Pence said the meeting was “memorable”: “There appears to be a disagreement.” Listening senators laughed.

Lying All the Way to the Border

Before the meeting, Trump tried a series of lines in tweets. He falsely said that much of the Wall had been constructed, and that he could command the Department of Defense to carry out the task.

….People do not yet realize how much of the Wall, including really effective renovation, has already been built. If the Democrats do not give us the votes to secure our Country, the Military will build the remaining sections of the Wall. They know how important it is!

In fact, there has been no significant construction of the Wall except for the unveiling of a prototype. Substantive work has been on additional fencing, a measure also pursued by the Obama Administration.

Repeating his demonisation of those seeking immigration or asylum, Trump pronounced, “They [the Democrats] want Open Borders for anyone to come in. This brings large scale crime and disease.”