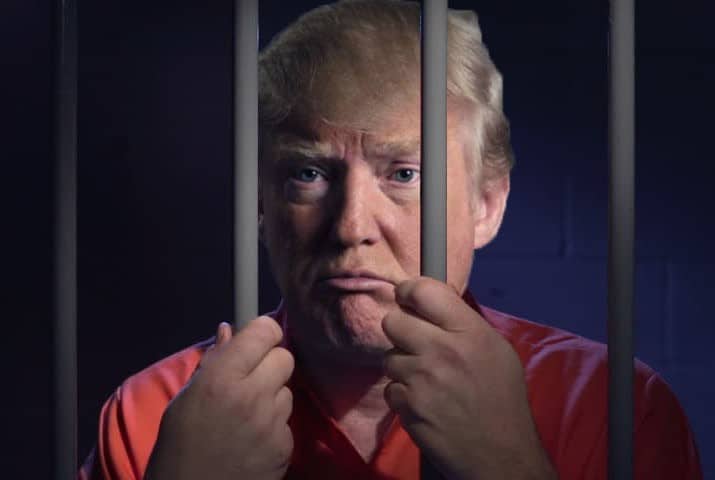 Could Donald Trump go to prison over campaign finance violations or Russia-connected charges?

Cohen will be sentenced this week for campaign finance violations, a felony charge, and the prosecutors’ memorandum indicates that Trump — at least in principle — could face the same allegation.

The former lawyer also said he was in contact in November 2015 with a Russian operative who suggested “synergy” between the Trump campaign and the Kremlin. The approach came as Cohen was pursuing a Trump Tower in Moscow, a project which continued until June 2016.

EA on BBC: Why Cohen Could Be Beginning of Trump’s Downfall

My takeaway is there’s a very real prospect that on the day Donald Trump leaves office the Justice Department may indict him, that he may be the first President in quite some time to face the real prospect of jail time….

We have been discussing the issue of pardons that the President may offer to people or dangle in front of people. The bigger pardon question may come down the road as the next President has to determine whether to pardon Donald Trump.”

Until now, you had two different charges, allegations, whatever you want to call them. One was collusion with the Russians. One was obstruction of justice and all that entails. And now you have a third — that the president was at the center of a massive fraud against the American people.

Both the House Intlligence and Judiciary Committees, led by Democrats from January, are likely to summon material and witnesses after Republicans limited the process over the past 21 months.

Former FBI director James Comey, fired by Trump in May 2017 in an attempt to halt the Trump-Russia investigation, said in a Sunday night discussion in New York:

JUST NOW: Comey says if Trump were not president he would be "in serious jeopardy of being charged." pic.twitter.com/H8v7uYx2bl

Comey added that Trump had to be stopped politically if he survived to the end of his first term and the 2020 election:

All of us should use every breath we have to make sure the lies stop on January 20, 2021.

Meanwhile, Trump is struggling to replace White House Chief of Staff John Kelly, who is resigning at the end of December.

Trump wanted Nick Ayers, the Chief of Staff to Vice President Mike Pence, to fill the post. However, Ayers confirmed on Sunday that he declined the post, saying he wants to move back to his home state of Georgia with his two young children. He offered to serve until the spring, but Trump insisted on a two-year commitment.

Thank you @realDonaldTrump, @VP, and my great colleagues for the honor to serve our Nation at The White House. I will be departing at the end of the year but will work with the #MAGA team to advance the cause. 🇺🇸 #Georgia

Trump tried to argue on Sunday night that he had not tapped Ayers for the post:

I am in the process of interviewing some really great people for the position of White House Chief of Staff. Fake News has been saying with certainty it was Nick Ayers, a spectacular person who will always be with our #MAGA agenda. I will be making a decision soon!

But journalists said that Mick Mulvaney, the director of the Office of Management and Budget, has ruled himself out, and that Treasury Secretary Steven Mnuchin and Trade Representative Robert Lighthizer also do not want the post.