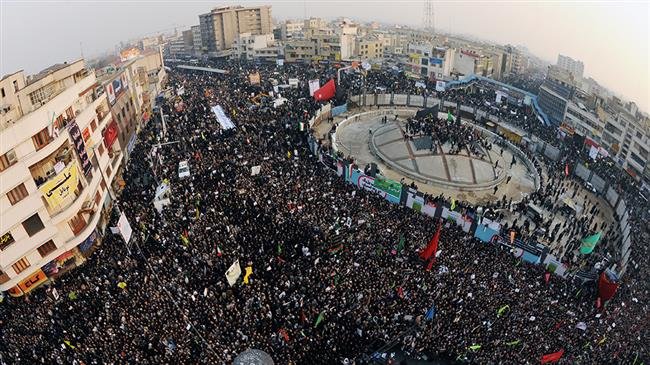 Iran’s regime has celebrated the suppression of the mass protests after the disputed 2009 Presidential elections, organizing rallies in Tehran and other cities on Sunday.

Iranians gathered in Enghelab Square in the capital, mark the 10th anniversary of the “9 Dey” counter-protests that shored up the regime position after months of demonstrations. An estimated 1.5 million people marched in Tehran on June 15, three days after the regime declared the re-election of Mahmoud Ahmadinejad, despite widespread claims of vote manipulation and a crackdown on opposition campaigns with mass detentions.

The marches continued through the Ashura demonstration of December 21, unsettling the regime after its security forces retreated and police stations were set on fire. The “9 Dey” rally was quickly organized to display support for the Supreme Leader and the country’s establishment.

The rallies of the opposition Green Movement diminished during 2010, amid ongoing regime imprisonment of thousands of activists, as well as the killing of scores of demonstrators. In February 2011, Green leaders Mir Hossein Mousavi — claimed by many to be the vote leader in the 2009 election — fellow candidate Mehdi Karroubi, and Mousavi’s wife Zahra Rahnavard were put under strict house arrest. They are still detained.

This morning’s State media label the demonstrations “sedition” and write: “The unrest in 2009 was orchestrated by Mehdi Karroubi and Mir Hossein Mousavi….Both remain under house arrest on charges of provoking the public and harming the national security.”

Iran’s Parliament Speaker Ali Larijani used today’s occasion to portray the mass protests as “US interference” and to condemn the Trump Administration’s current approach: “It seems that America is still stuck in its deplorable delusion, vigorously pursuing sanctions against Iran with an anti-Iran propaganda machine, to the extent that it cannot help enunciating its empty wishes.”