A Guide to Watching US Election Night 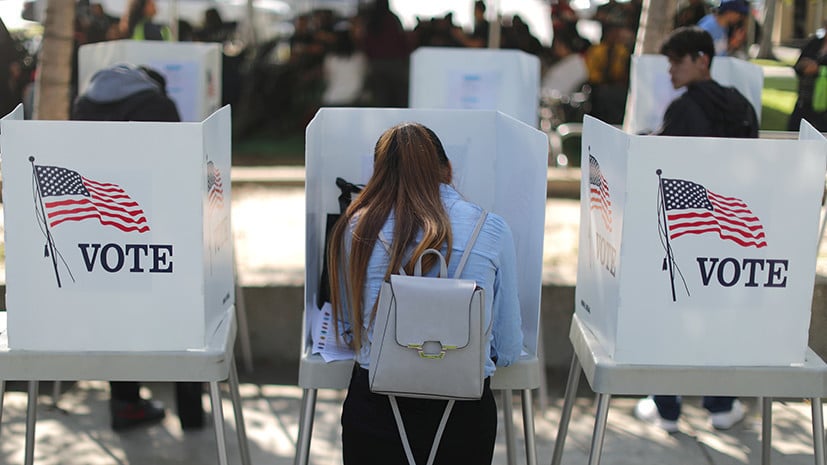 This may be the most important mid-term US election in American history, determining not only majorities in each house of Congress but also the fate of America amid the division and animosity of the Trump era.

Here’s a brief guide, with key races and times to staying up Tuesday night for the results.

A Beginner’s Video Guide to the US Congressional Elections

EA on Al Jazeera English: Will Women Decide the US Congressional Elections?
EA on talkRADIO and BBC: Assessing the Midterm Elections and Trump’s Future

The House of Representatives

The current Republican majority is 235-193 with seven seats vacant. Democrats need to take over 25 Republican or vacant seats to take control.

The best forecaster, FiveThirtyEight, gives Democrats an 85% chance of reaching that target. The site projects that Democrats will gain 38 seats for an overall majority of 31 in the new Congress.

With a projected 7% advantage over the GOP, Democrats are expected to make significant gains in Pennsylvania, picking up four seats with three more as toss-ups. Other leading battlegrounds are California, Minnesota, Florida, and Iowa. 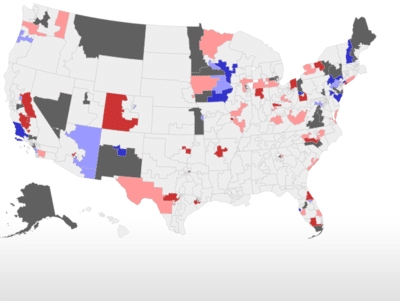 The current Republican majority is 51-49.

Despite the 7% polling lead, Democrats have a far tougher task than with the House, as they are defending 26 of the 35 contested seats — and the nine Republican seats are all in GOP strongholds.

Democrats will struggle to take Texas or Tennessee on current projections — So they must win the other two GOP seats and hold their five vulnerable seats. However, North Dakota is favored to go GOP and Missouri is a toss-up.

Based on this, the Democrats’ best hope appears to be 50-50, with Vice President Mike Pence the deciding vote, but a small increase in Republican majority is more likely. 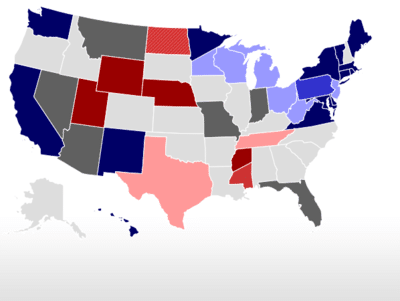 All options are possible because of a likely record turnout. A surge among “Trump’s base” and other Republicans could lead to the GOP holding both chambers, or a surge among Democrats and those differing with Trump could lead to an upset in the Senate. Early voting has soared — GOP cheerleaders says that is good for them, while Democrats note a rise in the 18-to-24 vote (400% in Georgia amid a close Governor’s race, 700% in Tennessee with its Senate contest).

So here’s the ClockWatch for important developments:

Democrat incumbent Joe Donnelly is defending the Senate seat against Republican Mike Braun, with a 70% chance of success.

If GOP wins, chances of a Democratic majority in the Senate disappear at the first hurdle.

Also: the hotly-contested Georgia Governor’s race, where Democrat Stacey Abrams is seeking to become the first African American to hold the position in the traditionally Republican state. GOP candidate Brian Kemp, the current Secretary of State, has been accused of purging hundreds of thousands of voter registrations — mainly of people of color — to win the ballot.

0030 GMT (7:30 US Eastern): In West Virginia, Democrat Senator Joe Manchin should keep his seat despite a late-campaign wobble. If he doesn’t, the GOP are on the way to a “Red Surge” increase in their majority.

Republicans are defending a series of vulnerable House seats in North Carolina and Ohio.

0100 GMT (8 pm US Eastern; 7 pm US Central): Possibly the key point of the evening, with polls closing in three key Senate races and in much of Texas in a fourth contest.

There is a must-hold for Senate Democrats in Florida, with Democrat incumbent Bill Nelson given a 67% chance of defeating current Republican Governor Rick Scott. In Missouri, Democrat incumbent Clare McCaskill has edged to a 63% favorite over Josh Hawley.

On the Republican side, Marsha Blackburn is an 80% favorite to keep the seat for the GOP against Democrat Phil Bredesen. In Texas, former Presidential candidate Ted Cruz is a 78% favorite to hold off high-profile Democrat Beto O’Rourke.

If GOP breaks through in Florida or Missouri, then they are safe. Conversely, if there is an upset in either Texas or Tennessee, then a Democrat majority is plausible.

Also: watch Pennsylvania, where no less than nine House seats are in play.

Also: New York has six House races which are close, including two toss-ups. And most of Minnesota is competitive, with five close or toss-up contests.

0300 GMT (8 pm US Mountain; 0700 Pacific): In Montana, Democrat incumbent Jon Tester appears to be pushing back a GOP effort in which Donald Trump has made several visits — he is now an 88% favorite over Matt Rosendale — in another race that Democrats cannot afford to lose.

And in Nevada, Democrats will be looking to claim the seat of GOP incumbent Dean Heller, who holds only a 53% chance of defeating Jacky Rosen.

Remaining polls close in North Dakota, where the GOP — in the 4th-most Republican state in the US — has its best chance of taking a Senate seat from the Democrats. Kevin Cramer is a 75% favorite over incumbent Heidi Heitkamp.

Also: If the House is still up for grabs, California has six close contests, five of which are toss-ups.