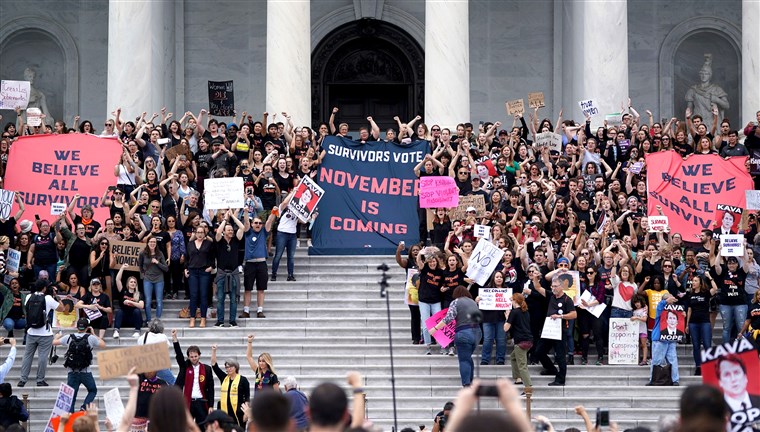 Brett Kavanaugh is sworn in as a Supreme Court Justice — defying allegations of sexual assault and of deceptive and partisan testimony before a Senate committee — amid protests in Washington.

The White House and GOP leadership pushed through Kavanaugh on a 50-48 vote on Saturday, following the decisive announcements by Republicans Susan Collins and Jeff Flake that they would vote Yes after a sharply-limited FBI “investigation” of the assault claims.

TrumpWatch, Day 624: Kavanaugh to Be Confirmed Despite Claims of Sexual Assault and Deception

Lisa Murkowski of Alaska, the lone Republican to oppose Kavanaugh, voted Present in a twinning arrangement with Steve Daines of Montana, a Kavanaugh supporter who was at his daughter’s wedding yesterday.

As the Senate voted, cries of “Shame, Shame, Shame” rang from the public galleries. In addition to the claims by three women — two of whom were not interviewed by the FBI, as well as the White House’s instructions not to interview dozens of corroborating witnesses — Kavanaugh has faced questions over his views on issues such as abortion, gun control, women’s and LGBT rights, and the scope of Presidential power.

I don’t know what you were doing when those voices were shouting — and screams and, I’m sure, tears.

But for the GOP leadership, all that dissipated as Kavanaugh sworn in at a private ceremony at the Supreme Court by Chief Justice John Roberts and the man he will replace, retiring Justice Anthony Kennedy.

Outside, protestors rallied before being pushed back from steps by police.

Donald Trump, who wavered last week and was ready to concede a full FBI investigation before he was overruled by White House counsel Don McGahn, celebrated by lying about the size of the protests:

The crowd in front of the U.S. Supreme Court is tiny, looks like about 200 people (& most are onlookers) – that wouldn’t even fill the first couple of rows of our Kansas Rally, or any of our Rallies for that matter! The Fake News Media tries to make it look sooo big, & it’s not!

At a rally in Kansas and on Twitter, Trump tried to use the episode to whip up votes for Republicans in Congressional elections on November 6: “You don’t hand matches to an arsonist, and you don’t give power to an angry left-wing mob. Democrats have become too EXTREME and TOO DANGEROUS to govern.”

He insisted to reporters aboard Air Force One that the GOP would not be hurt by the controversy around Kavanaugh: 11 white elderly and middle-aged male Republicans on the Senate Judiciary Committee, as well as the GOP leadership, ramming through the confirmation before the November vote; the dismissal of the stories of sexual assault survivors, among Kavanaugh’s accusers and the many protesters; and chiding by Republican Senators — and Trump — of a “mob”, financed by billionaire George Soros, that should “grow up”.

“Women, I feel, were in many ways stronger than the men in this fight,” Trump said. “Women were outraged at what happened to Brett Kavanaugh. Outraged.”

Senate Majority Leader Mitch McConnell told journalists, “The virtual mob that has assaulted all of us in this process has turned our base on fire.”

However, Deborah Ramirez — the second of Kavanaugh’s accusers — highlighted the significance of the claims that the new Supreme Court Justice and his supporters face:

Thirty-five years ago, the other students in the room chose to laugh and look the other way as sexual violence was perpetrated on me by Brett Kavanaugh.

As I watch many of the senators speak and vote on the floor of the Senate I feel like I’m right back at Yale where half the room is laughing and looking the other way. Only this time, instead of drunk college kids, it is U.S. senators who are deliberately ignoring his behavior.

This is how victims are isolated and silenced.