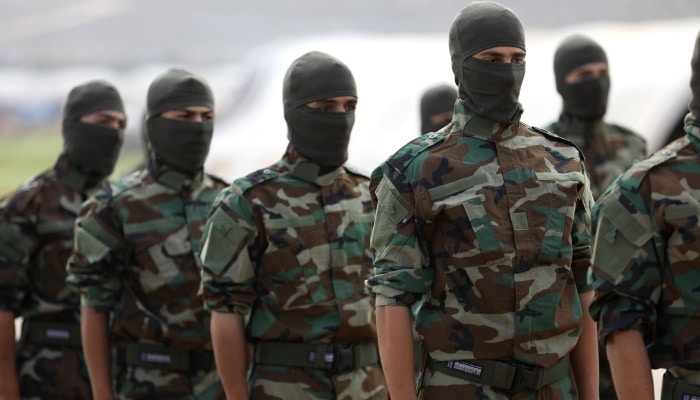 Fighters from the Jaysh al-Izza rebel faction, in a training session with the Turkish army in Idlib city, April 9, 2018 (Omar Haj Kadour/Reuters)

Rebels have completed the withdrawal of their heavy weapons from the demilitarized zone in northwest Syria, declared by Turkey and Russia.

A spokesperson for the National Liberation Front, the Turkish-backed rebel coalition, said, “Our heavy weapons – including tanks and cannons – have been moved to the back lines of the de-militarized zone so that they are no longer a target for the Russian warplanes.”

Naji al-Mustafa added, “We will remain in our defence lines with our small arms and light weapons.”

As the NLF pulled out its arms, Turkish forces brought in their own heavy weapons as they oversee the zone around Idlib, northern Hama, and northern Latakia Provinces, home to an estimated 3 million Syrians.

The 15 to 20-km (9 to 12.5-mile) wide and 100-km (62-mile) long zone was announced after Turkish President Recep Tayyip Erdoğan and Russian counterpart Vladimir Putin met on September 17. The agreement suspended a planned Russian-regime offensive to overrun the last major opposition area in Syria.

Under the terms, the jihadist bloc Hay’at Tahrir al-Sham, which controls part of Idlib, is to withdraw from the zone by October. HTS has not announced its position. Local sources say that the bloc has quietly withdrawn its heavy weapons, but that its fighters are remaining in the area.

Rebels have said they will stay, and have also insisted that Russian personnel are not involved in patrolling the zone.