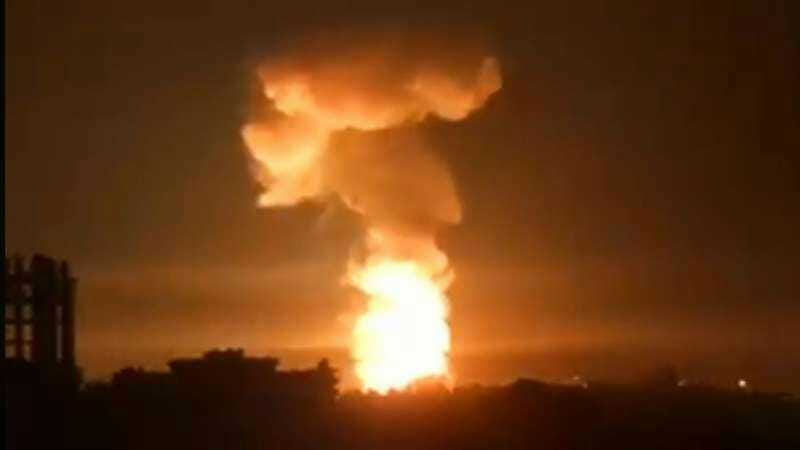 Fire from an Assad regime site in western Syria after an Israeli missile strike, September 17, 2018

Israel has declared that it is still carrying out airstrikes against Assad regime and Iranian targets inside Syria, despite tension with Moscow since a Russian surveillance plane was accidentally downed in mid-September.

“The IDF [Israel Defense Forces] have attacked in Syria, including after the downing of the Russian plane. Military coordination with the Russians continues as before,” said a “senior Israeli official”.

The official did not give details of any operations. However, Israel’s Channel 1 TV said one airstrike targeted an Iranian shipment of equipment for Lebanon’s Hezbollah, intended to increase the accuracy of rockets and missiles.

On September 17, Israeli F-16s fired missiles on Assad regime targets across western Syria. The Assad regime’s air defenses, trying to down the attackers, instead struck a Russian Il-20. The surveillance plane crashed into the Mediterranean, killing 15 personnel.

Israel claimed that the F-16s had already left the area to return to base, but the Russian Defense Ministry maintained that the Israeli jets were using the Il-20 for cover. The Ministry accused the Israeli air force of behavior that was irresponsible and possibly criminally negligent. President Vladimir Putin downplayed the incident as a tragic accident, but the Kremlin refused the request of Israeli Prime Minister Benjamin Netanyahu to visit Moscow.

In its most significant move, Russia finally delivered four S-300 air defense missile systems to the Assad regime, after years of delaying the measure.

Despite the friction, Israel and Russia maintained their “de-confliction” agreement, established in September 2015 just before Moscow’s military intervention propping up the Assad regime. Under the terms, Russia has accepted Israeli operations to keep Hezbollah, Iranian, and Iranian-led forces out of southwest Syria near the Israeli-occupied Golan Heights.

The Kremlin assured the Israelis that the S-300s are not aimed at “any third country”. Analysts believe that Russian personnel remain in control of the anti-aircraft systems, despite the nominal handover to the Assad regime’s military.

Pushing back the Assad regime, the Kremlin has reaffirmed its support for the demilitarized zone around opposition territory in northwest Syria.

The regime’s Foreign Minister Walid al-Moallem said late Monday that Turkey was not implementing the deal agreed with Russia on September 17 for a 15 to 20-km wide and 100-km long zone around Idlib and northern Hama Provinces.

“The terrorists still exist with their heavy arms in this region and this is an indicator of Turkey’s unwillingness to fulfill its obligations,” Moallem said.

Rebels have remained in the zone while withdrawing their heavy weapons, as Turkish forces moved in arms to oversee the ceasefire.

Unfortunately, not everything is in line with the plan, I mean the ideal plan, which our Turkish colleagues had. [President Vladimir] Putin said that we understand this as the situation is really very difficult….The Turkish side is making great efforts to fulfill all agreements.

Turkish Foreign Minister Mevlüt Çavuşoğlu told a news conference in Istanbul, “There are currently no issues in implementing the memorandum….Everything is going as planned.”

But on Saturday Putin and Turkish President Recep Tayyip Erdoğan were joined by France’s Emmanuel Macron and Germany’s Angela Merkel in reaffirming the zone.