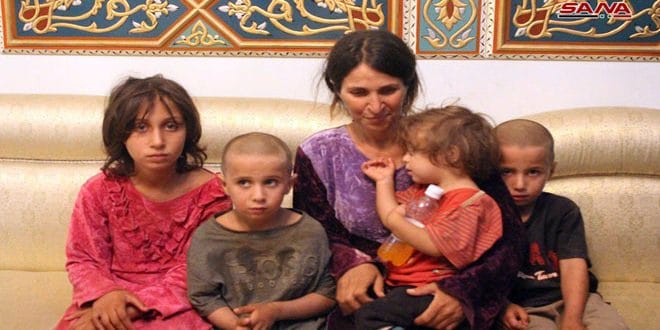 A woman and 4 children freed by ISIS in a swap for detainees from Assad regime prisons, October 20, 2018

Twenty-five women and children have been released in a swap of prisoners and abductees between the Assad regime and the Islamic State in southeast Syria.

The six women and children held by the Islamic State were among 27 taken when the group attacked Druze areas in Sweida Province in July. At least 258 people were killed and 180 injured.

Regime media headline ISIS’s release of its six hostages, but do not mention the swap for the 19 detainees.

The swap followed a ceasefire on the front in southeast near the town of Safa. Protracted fighting has brought significant casualties on both sides.

The Islamic State, which once held much of north and east Syria, has been driven out of all major areas which it held — partly by pro-Assad offensives enabled by Russian airpower, partly by the US-supported, Kurdish-led Syrian Democratic Forces.

But the group still holds pockets of territory in eastern Syria and retains the ability to strike both pro-Assad and Kurdish positions.