Iran Daily: Supreme Leader — “We Will Slap the US in the Face” 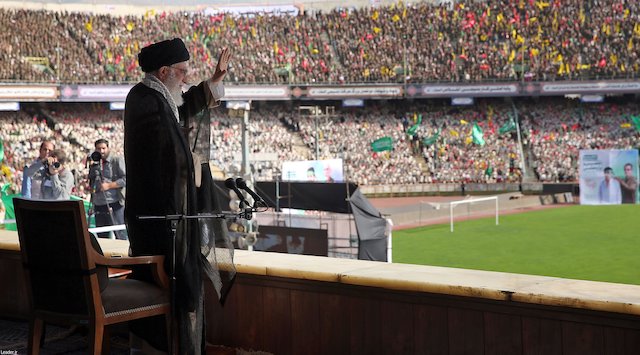 Trying to rally Iranians amid economic difficulties and expanding US sanctions, the Supreme Leader has said the Islamic Republic will slap America in the face.

Ayatollah Khamenei told an audience of military officials and Basij paramilitary volunteers in Tehran’s Azadi Stadium on Thursday that the sanctions are “more fragile than” Iran’s economy, despite ongoing problems with production, investment, trade, employment, the environment, and a declining currency:

Following vast explorations, the enemy has arrived at sanctionsto counter the Islamic Republic. It has no other solution but economic sanctions. Other paths in front of it are blocked….

Khamenei derided a supposed — and previously unknown — declaration by Donald Trump to European leaders that the Islamic Republic will collapse within three months.

Since 2012, with the earlier round of international sanctions before a 2015 nuclear agreement, the Supreme Leader has proclaimed a “Resistance Economy” with self-sufficiency to stand against the pressure of the US and its allies. However, Khamenei has been vague in details of the necessary economic measures, and successive Governments have struggled with long-standing internal barriers as well as the ongoing American restrictions.

Those sanctions will be comprehensive from November 5, when the Trump Administration — having withdrawn from the nuclear deal in May — imposes measures on Iran’s energy and financial sectors. Tehran’s oil exports, providing about 80% of Government revenue, have already fallen 30% since April.

But Khamenei covered this with defiance yesterday:

The enemy wants to bring the Iranian nation to the conclusion that there is a dead end, and that there is no solution except kneeling and giving in to the US….

[I] will not allow that to happen in the country….The grandeur and authority of the Islamic Republic and its invincibility are not empty talk or mere slogans. It is a fact about which the enemies seek to keep us ignorant.

He insisted that Americans “are afraid of Islamic power and the Revolution’s might”.

President Hassan Rouhani was far more measured on Wednesday, telling politicians and activists that Iran is confronting a “complicated situation” and conditions are “unusual and delicate”.

He explained that “today we are a sensitive juncture… in the middle of a full-fledged economic war”.

Facing pressure from hardliners and even from some within his centrist camp, Rouhani appealed for support while implying that economic difficulties will persist for some time:

Expectations from the government should be proportionate….If this administration was not at the helm, perhaps Iran would have exited JCPOA [the nuclear deal] even before the US announcement and today we would have faced even a more critical situation.