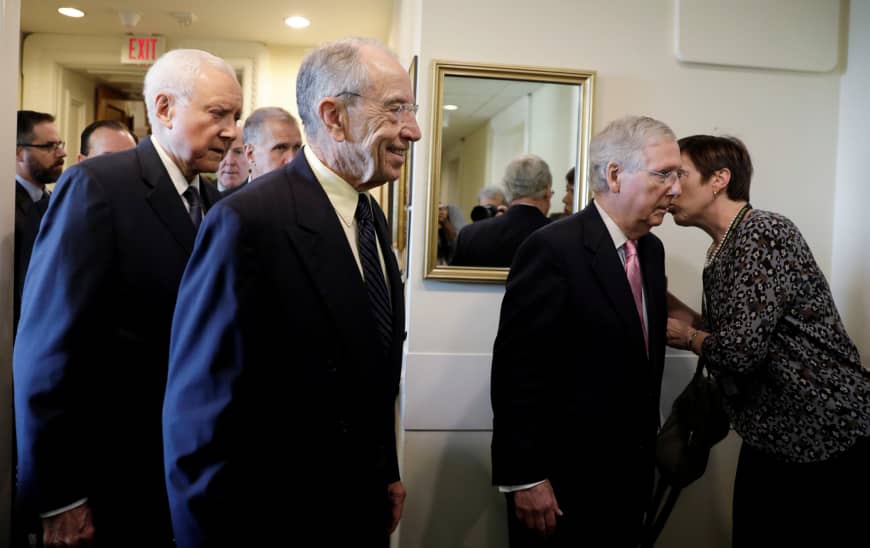 The Trump Administration and GOP leadership prepare to ram through Supreme Court nominee Brett Kavanaugh’s confirmation, after the conclusion of a staged “investigation” to push aside sexual assault claims by three women.

Senate Majority Leader Mitch McConnell scheduled the confirmation vote for Saturday afternoon, amid a controlled process in which Senators were escorted to a basement room to read — or have read to them — the FBI report after a five-day check defined by the White House.

Almost all Republican senators issued the rote message that there was nothing in the report indicating sexual assault or other misconduct by Kavanaugh. Almost all Democrats noted that the “investigation” — forced on the White House and GOP leadership when Republican Senator Jeff Flake attached a condition in his support for the 11-10 vote sending the judge’s nomination to the full Senate — had not interviewed two of the three accusers, their corroborating witnesses, or Kavanaugh.

Deborah Ramirez, the second of Kavanaugh’s accusers, was interviewed by the FBI, but the agency did not follow up on a list of more than 20 potential witnesses which she provided. Lawyers for Professor Christine Blasey Ford, the first accuser, said they received no response to their list of eight witnesses and offer to provide evidence including medical records.

The party-line division has left the confirmation in the hands of four undecided senators: Republicans Flake, Susan Collins, and Lisa Murkowski and Democrat Joe Manchin.

Both Collins and Flake tipped their hand when they said the “investigation” had been “thorough”, even before they saw the full report. Murkowski and Manchin were far more reserved, saying they needed time to consider the document.

Democrat Heidi Heitkamp of North Dakota, who had been undecided, said she will vote against Kavanaugh. Risking punishment in her attempt for re-election, where she trails narrowly in polls, Heitkamp said, “When I listened to Dr. Ford testify, I heard the voices of women I have known throughout my life who have similar stories of sexual assault and abuse.”

Meanwhile, in an effort coordinated with the White House, Kavanaugh gave up all appearance of a future non-partisan Supreme Court justice, writing an opinion article in the conservative Wall Street Journal. He said nothing about the three women and their claims or of his alleged deception in his testimony before the Judiciary Committee, including over his drinking and sexual activity in high school and university. Instead, he invoked his family and said his combination of aggression and defensiveness in his testimony was due to his “overwhelming frustration at being wrongly accused”.

Continuing the GOP leadership’s tactic of attacking Democrats for a “witch hunt”, Majority Leader McConnell accused them of “partisan histrionics” and an “outrageous smear”.

More than 300 women were arrested by Capitol police amid mass protests outside senators’ offices. Judiciary Committee member Orrin Hatch dismissed the women, including sexual assault survivors, with a wave of the hand and the injunction “Grow up”.