TrumpWatch, Day 617: Trump & GOP Back Down Over FBI Investigation of Kavanaugh 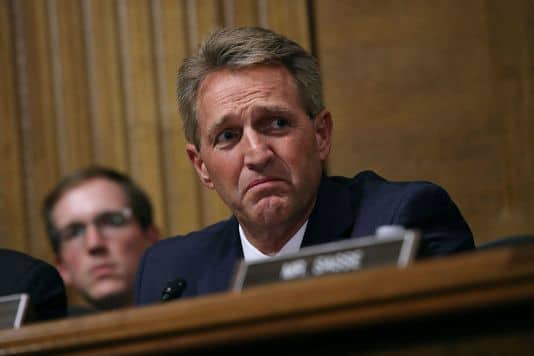 Donald Trump and the GOP leadership back down and accept a one-week FBI investigation of Brett Kavanaugh, delaying a Senate confirmation vote on the Supreme Court nominee accused by multiple women of sexual assault.

Republican leaders in the Senate, who had vowed to “push through” Kavanaugh’s confirmation despite the allegations, were forced into the concession after GOP Senator Jeff Flake attached the condition to his support in the Senate Judiciary Committee, which passed the nomination to the full Senate on an 11-10 party-line vote.

Podcast: What Happens Now With Kavanaugh?
Podcasts: After Ford’s Testimony, the Issues Beyond Kavanaugh’s Confirmation

The White House and Republicans on the Committee had held out for days against any inquiry into the claims by Professor Christine Blasey Ford and then Deborah Ramirez and Julie Swetnick. Ford, who testified before the committee on Thursday, says Kavanaugh pinned her on a bed, groped her, and tried to remove her clothes at a small high school party in 1982. Ramirez says the nominee exposed his penis to her during a party at Yale University in their freshman year in 1983, and Swetnick claims Kavanaugh was part of a group who drugged and gang-raped teenage girls at parties.

Despite Ford’s compelling testimony and an aggressive response by Kavanaugh that divided observers, the Committee appeared on the verge of supporting Kavanaugh when Flake, the one GOP senator with reservations, said in the morning that he would vote Yes.

But after Flake’s dramatic lunchtime encounter with women who demanded that he listen to their stories of sexual assault — and amid his discussions with colleagues Lisa Murkowski of Alaska and Susan Collins of Maine, seen as the other undecided GOP senators — he returned to the committee with head bowed and appearing troubled.

Just before the scheduled vote, Flake motioned to his close friend and Democrat member of the Committee, Chris Coons of Delaware, and the two conferred left the room to confer. Other Committee members also left to see what was developing, as Committee chairman Charles Grassley and other Kavanaugh supporters waited with apparent exasperation. Some Republicans pressed Flake to return to his original position of unconditional backing of referral to the Senate.

After more than 30 minutes, Senators streamed back into the room and the vote was taken. Flake say Yes — but with the condition of the one-week FBI investigation which Coons had proposed, unsuccessfully, at the start of the day’s proceedings.

Amid some confusion, it was finally established that Flake’s decision was personal and not binding on the Committee.’Grassley emphasized that the question of the vote’s timing in the Senate was up to Majority Leader Mitch McConnell.

But Flake’s status as a key swing vote in the full Senate — and with the possibility, given his meetings, that Murkowski and/or Collins will be alongside him in the final decision — McConnell risked losing the GOP 51-49 majority if he proceeded without the investigation. So after Republicans senators huddled, their reversal with support of a limited FBI investigation was announced, and the Majority Leader postponed a procedural vote scheduled for Saturday, adjourning the chamber for the weekend.

Trump followed with the order to the Justice Department.

Just started, tonight, our 7th FBI investigation of Judge Brett Kavanaugh. He will someday be recognized as a truly great Justice of The United States Supreme Court!

In a relatively muted statement earlier in the day, Trump praised Kavanaugh’s performance as “incredible”. But, for the first time, he also complimented Ford as “credible”, and he was far from assertive over Kavanaugh’s fate: “We see how the vote goes.”

While the scope of the FBI inquiry is still to be determined, there was an immediate development with Mark Judge — Kavanaugh’s close friend in high school and, according to Ford, present in the room when she was sexually assaulted — saying he would agree to an FBI interview if “confidentiality” was assured.

Judge had refused to give any testimony beyond a cursory written statement, through his lawyer, that he could not recall the incident.