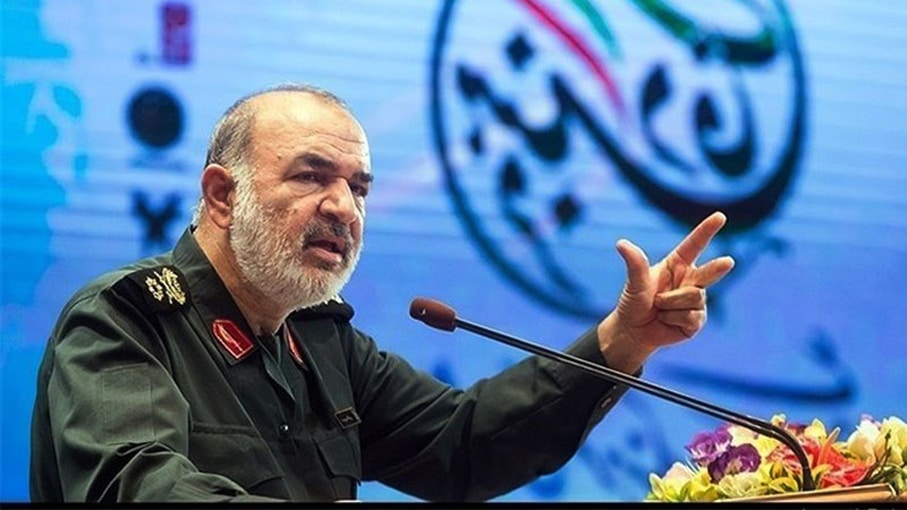 In its latest warning to Saudi Arabia and the UAE, Iran’s Revolutionary Guards have said that the two countries will suffer a “crushing response” if they keep crossing the Islamic Republic’s red lines.

Addressing Friday worshippers in Tehran, the deputy commander of the Guards, Brig. Gen. Hossein Salami (pictured), spoke of last Saturday’s gun attack on a military parade in Ahvaz in southern Iran, which killed at least 24 people and wounded 68. He maintained that the gunmen were supported by the “nasty triangle” of the US, the “Zionist regime” of Israel, and Saudi Arabia:

Stop hatching plots against others, you’re not invincible. You are sitting in your glass palaces, and you can’t withstand the blade of the Iranian nation’s revenge.

Our self-restraint is deeply rooted in our revolutionary nobility, but if you cross our red lines, we will surely cross yours. You know the storm the Iranian nation can create.

Who’s Behind the Attack Killing 29 in Ahvaz in Southwest Iran?

The Tehran Friday Prayers leader, Ayatollah Mohammad Ali Movahed Kermani warned, “The US and Israel would rue the day as their bases would not be safe anymore if they make the slightest mistake.”

Since the attack, Iran’s leaders have focused on external powers, rather than the internal issue of Ahvazi separatism — the population of the city in the southwest of the country is largely Arab, and there have been recurrent protests over the regime’s economic and social policies.

The Supreme Leader decalred “conspiracies by the US-backed regimes in the region”, and President Hassan Rouhani echoed with “small puppet countries in the region are backed by America”.

On Sunday, the Revolutionary Guards pledged “deadly and unforgettable revenge” against “the ruthless stooges of the global arrogance and reactionary regimes in the region”.