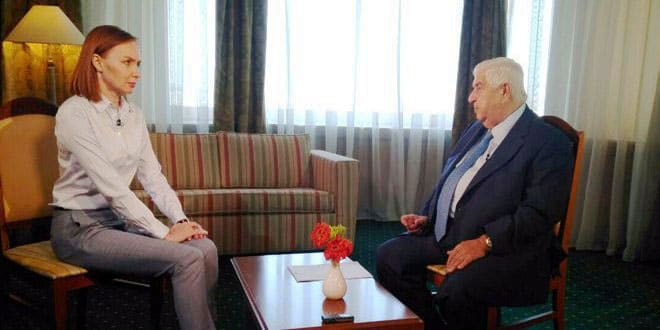 UPDATE 0915 GMT: The Assad regime’s allies Iran and Russia have both maintained the drumbeat for an assault on Idlib Province.

Iranian Foreign Minister Mohammad Javad Zarif, in Damascus for talks including with Bashar al-Assad, said rebels must be “cleaned out” of the opposition area:

All of Syrian territory must be preserved and all the sects and groups should start the round of reconstruction as one collective and the displaced should return to their families.

And the remaining terrorists in the remaining parts of Idlib must be cleaned out and the region should be placed back under the control of the Syrian people.

Russian Foreign Minister Sergei Lavrov repeated his declaration that the Assad regime has the right to “liquidate terrorists” and said the situation cannot be tolerated indefinitely.

The Iranian, Russian, and Turkish leaders will confer in Tehran on Friday.

The Assad regime’s Foreign Minister, using the State outlet of ally Russia, has put out a series of false statements to set up a pro-Assad assault on the last major opposition area of Syria.

In an interview with Rossiya-24 TV, Walid al-Moallem repeated the disinformation — also promoted by high-level Russian officials — of a “false flag” chemical attack by rebels and White Helmets on Idlib Province in northwest Syria. He also turned the build-up of regime and Russian forces in the area into supposed preparations by the US, Britain, and France for attacks on regime positions.

The Assad regime and Russia have used the unsupported “false flag” claim to cover for the regime’s use of chemical weapons in offensives, including the reoccupation of the East Ghouta area near Damascus in April.

As Russian Foreign Minister Sergey Lavrov said “militants” in Idlib were a “festering abscess” that must be eliminated, the Defense Ministry and its Ambassador to the UN, put out a series of statements last week saying the preparations for the “false flag” operation was advanced. At one point, the Defense Ministry said the attack would occur in 48 hours in the town of Kafrzita — it never occurred.

The Assad regime and its social media supporters have added other scare stories such as the falsehood that 44 children were abducted in northwest Syria to become the “victims” of the staged attack.

The disinformation has succeeded in weakening the position of UN envoy Staffan de Mistura. Calling for a ceasefire last week — but also adopting the regime-Russia line of “humanitarian corridors” for civilians to flee — De Mistura said, without evidence, that both the regime and rebels might be preparing for chlorine attacks.

Moallem used the Rossiya-24 interview to add another dimension of the claim: that the US, Britain, and France would use the “false flag” as the pretext for an “aggression” against Syria.

In a tangled statement, the Foreign Minister recycled the tactics from the spring, when the disinformation was followed on April 7 by a double chemical attack on Douma in East Ghouta. Rebels capitulated the next day, fearing more strikes.

On April 14, the US and its allies fired missiles on three complexes claimed to be part of the regime’s chemical weapons progrdam.

Moallem said, “The [chemical attack[ accusations are just an excuse to justify aggression and the US is not interested in any investigation that is inconsistent with its policies.”

Russia and the regime have issued the falsehood that the US, Britain, and France are building up forces in the Mediterranean attack. In fact, it is Moscow which is deploying, with 10 warships moved off the coast of Syria to threaten missile strikes on Idlib, western Aleppo, and northern Hama Provinces.

An estimated 2.8 million people, many of them displaced from other areas of Syria, are in Idlib Province alone.

Elsewhere in the interview, al-Moallem pressed the line — led by Russia — that the US should withdraw its forces from Syria.

US personnel have supported the Kurdish-led Syrian Democratic Forces since its creation in autumn 2015 to take territory from the Islamic State in northern and eastern Syria.

Despite Donald Trump’s wish for a withdrawal, the Pentagon is maintaining involvement not only as an anti-ISIS operation but also as a counter-force to Iran’s presence in Syria.

The Assad regime is banning men between the ages of 17 and 42 — the range for military service — from leaving Syria.

An official in the Department of Immigration and Passports confirmed social media reports that no man between 17 and 42 can depart without written permission from the Military Conscription Office.

Posts on social media said the order was implemented suddenly, causing confusion at border posts and airports. Hundreds of people were prevented from leaving yesterday, and bus drivers were blocked from crossing the border.

The pro-regime Al-Watan says the decree was issued in 2007, but implementation was only agreed in recents between the Defense and Interior Ministries.

The report reinforces accounts that refugees are reluctant to return to Syria — and the UN is unwilling to certify security in the country — in part because of forced conscription.

Something is happening in Syria. They are restricting ppl from travelling outside of the country. I have been seeing reports about this since last week but family and friends have confirmed: All men between 17-42 can't leave without a new Military Conscription Office approval. 1

if you are an only son you can leave without a permit ONLY if:

1- your mother is dead or over 50 (to make sure she's not pregnant with a potential bro.

3- You have to be in a very bad shape (official doc discharge) https://t.co/O7OCbqVUnp