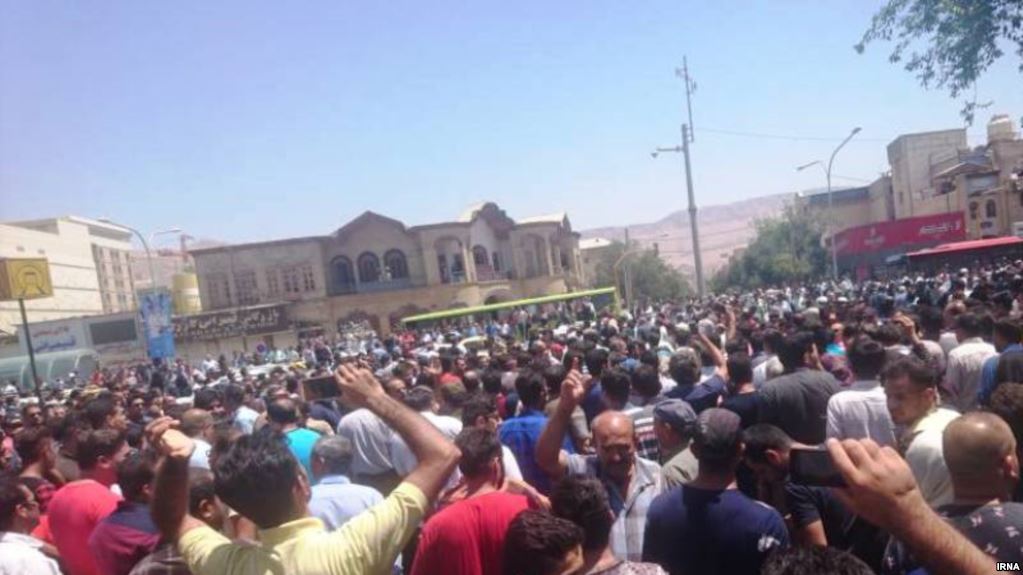 Nationwide protests over the economy continued for a fifth day in Iran on Saturday, with Iranian media claiming the first death of a demonstrator and an attack on a Shia seminary.

Reports and videos pointed to marches in Tehran, Karaj, Shiraz, Mashhad, Isfahan, and the holy city of Qom.

Fars, linked to the Revolutionary Guards, said a protester was killed on Friday during a protest in Karaj, about 50 km (31 miles) west of Tehran, when an attacker fired a gun from a passing car. The site said about 20 demonstrators were detained by security forces.

Fars and the conservative outlet Tasnim also claimed demonstrators attacked a Shia seminary in Eshtehard, 100 km (62 miles) west of Tehran, by throwing rocks and bricks which forced 500 clerics in training to leave. Several hundred people chanted slogans against the regime during the rally.

In Tehran, “Death to Dictator”:

Protests have been ongoing this year over wages, poor working conditions, and environmental damages. They spread across the nation in January and again in June before last week’s surge, sparked by a sharp decline in the Iranian currency which fed price rises and limited essential imports.

Fuel deliveries have reportedly been affected in part of Iran, with truck drivers restarting a May strike for higher wages.

We have to be honest with our people and tell them that we are in a serious economic war….If the government does not have a plan, the US sanctions could result in the loss of one million jobs in Iran….

We have to build public trust to deal with this economic trust … We have to give more freedom to government media outlets so they can build a public trust for facing this crisis.

The Rouhani Government again pledged steps to limit the damage from the currency devaluation.

First Vice President Es’haq Jahangiri said a new foreign exchange policy, promised last week, will be announced on Monday: “Given the new economic situation in the country and due to the looming US sanctions on Iran, our economy is in dire need of new decisions and amendment of earlier policies.”

He offered no details but pledged “market demands” will be met and importers, exporters, and those individuals in desperate need of foreign currencies for special issues [will] be provided with special facilities”.

Last week, Jahangiri indicated that the Government will abandon the unified official rate of 42,000:1 v. the US dollar. The rate was announced this spring in an effort to limit the rial’s fall, but soon crumbled amid shortages of foreign currency which could be provided at that level.

The Government is now offering a vague promise of intervention to control the open-market rate while providing the discounted rate to importers and those travelling abroad, but possibly limiting the amount available to tourists.

President Hassan Rouhani’s site says the Supreme Council of Economic Coordination “also discussed the proposal by the judiciary head about speeding up the process of countering corruption and bringing those who disrupt the economic sector of the country to justice”.

At Daughter’s Funeral, Detained Lawyer Soltani Calls for Help for Other Political Prisoners

Prominent lawyer Abdolfattah Soltani, detained since 2011 and given an 18-year sentence, was allowed to attend the funeral of his daughter last week.

Soltani called over Banihaghoob to say that, as he left Tehran’s Evin Prison for the service, he noticed the families of about 50 to 60 people who have been seized during the recent surge in protests across Iran. He asked the activist for her help in raising the detainees’ cases.

“Spread the news”, the lawyer said, seeking other human rights lawyer to represent the imprisoned protesters.

Baniyaghoob expressed her surprise that Soltani could be thinking of other political prisoners while grieving for his daughter.

He replied by paraphrasing the poet Ferdowsi, “If an arrow has been released, we have to cry for the ones who are still alive, not those who are dead.”

This is Abdolfattah Soltani, an Iranian human rights lawyer. He was briefly allowed out of prison to mourn his 30-yr-old daughter's death. #Iran's President @HassanRouhani is standing by & watching as #FreeSoltani's life slips from him. Soltani's crime? Defending human rights. pic.twitter.com/2YZmg9xHd9