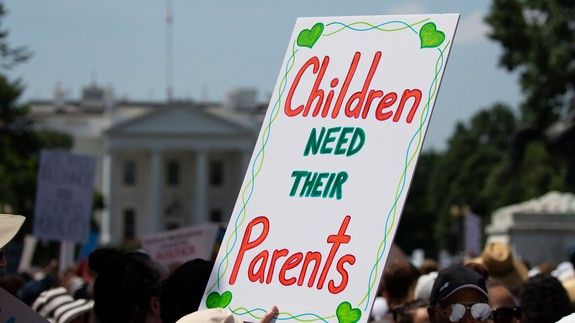 Trying to hold the offensive, even as more than 2,000 immigrant children are still detained and separated from their parents, Donald Trump again resorts to lies and a threat to suspend the legal process.

Trump’s “zero tolerance” policy of breaking up immigrant families as they cross the US border, before they can reach a port of entry to claim asylum, has been checked by public criticism following revelations about the detained juveniles. Last week a federal judge in California ordered an end to the separations of children and parents, and reunions of families within 30 days — 14 days in the case of children under 5.

The Administration is unlikely to meet that condition. The Pentagon has been ordered to construct facilities for up to 20,000 people on military bases but — even if they could be built within the time limit — the plan faces legal prohibition on detention of children, even with their parents, for more than 20 days.

There is also the practical difficulty that, in its haste to implement “zero tolerance”, the Administration did not keep adequate records and thus “lost” children who cannot be reconnected with their parents. Some mothers and fathers have already been deported, leaving juveniles behind in detention centers.

Only about 530 children of more than 2,500 seized have been reunited with parents so far.

A legislative path out of the crisis collapsed on Wednesday when a compromise immigration bill suffered a heavy defeat amid Republican division over the provisions.

So Trump began Saturday with a renewed attempt to shift blame, and to whip up those who still support him and “zero tolerance”, with misleading tweets. First, he falsely declared:

The Democrats are making a strong push to abolish ICE, one of the smartest, toughest and most spirited law enforcement groups of men and women that I have ever seen. I have watched ICE liberate towns from the grasp of MS-13 & clean out the toughest of situations. They are great!

While some activists and legislators are calling for the end of Immigration and Customs Enforcement, seen as heavy-handed in its implementation of the Adminstration’s crackdown, they are seeking a reform of enforcement rather than its abolition.

More directly, Trump was quickly challenged over his invocation of the specter of the MS-13 trans-national gang, used by the President to signal that all undocumented immigrants are threatening “animals”.

2) The notion that Trump has watched ICE “liberate” towns of MS-13 ranks up there with Cheney’s “greeted as liberators” remark on Iraq.

But Trump — who also said last week, as he signed a document which purported to end further family breakups, that New York’s Long Island had been “liberated” from MS-13 — pressed ahead, “The radical left Dems want [ICE] out. Next it will be all police.”

Later in the day, as Americans gathered across the country in Families Belong Together, Trump resorted to a blatant lie to distance himself from Wednesday’s legislative failure:

I never pushed the Republicans in the House to vote for the Immigration Bill, either GOODLATTE 1 or 2, because it could never have gotten enough Democrats as long as there is the 60 vote threshold. I released many prior to the vote knowing we need more Republicans to win in Nov.

In fact, on the day of the vote, Trump tweeted in all caps, “HOUSE REPUBLICANS SHOULD PASS THE STRONG BUT FAIR IMMIGRATION BILL, KNOWN AS GOODLATTE II”.

He didn’t even bother to delete the old one pic.twitter.com/A47TuOFfNS

Trump closed the day with another demand for the suspension of the legal process for undocumented immigrants. Having ruled out the appointment of more judges — a proposal by Republican senators — by denouncing them as unqualitied and opened to graft, Trump again portrayed hearings as an attempt to subvert the American system:

When people come into our Country illegally, we must IMMEDIATELY escort them back out without going through years of legal maneuvering. Our laws are the dumbest anywhere in the world. Republicans want Strong Borders and no Crime. Dems want Open Borders and are weak on Crime!

Meanwhile, there was no statement from Administration officails yesterday on the fate of the immigrant children who remain in detention.