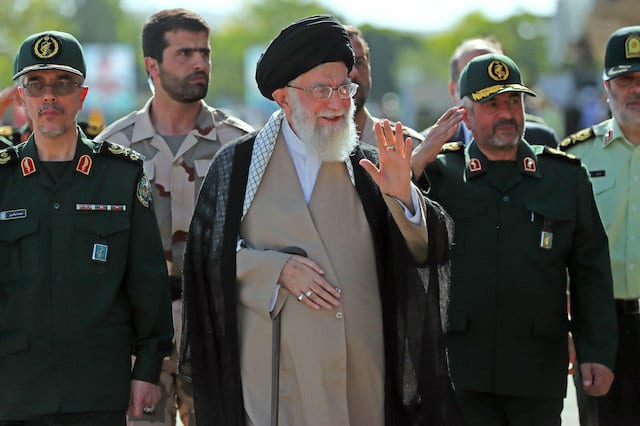 Under pressure from protests and discontent over Iran’s economic crisis, the Supreme Leader again tried to turn anger against the US on Saturday.

The enemy’s plan is to create gaps and separations between the establishment and the people, and this design reflects their stupidity because they do not know that the Islamic Republic is nothing but the Iranian nation and these two cannot be separated.

After years of mismanagement, corruption, and international sanctions, Iran’s economy has been put under more pressure by Donald Trump’s May 9 announcement withdrawing the US from the July 2015 nuclear agreement and pledging American punishment of any foreign company trading or investing with the Islamic Republic from November 4.

Washington’s measures have further diminished Iranian hopes for recovery after the nuclear deal and instead fed tensions, amid ongoing protests over pay, working conditions, and the environment and nationwide demonstrations in January.

The protests spiked last weekend after the Iranian currency, already at a historic low, fell 20% in 48 hours. Demonstrations spread to the Tehran Bazaar and to markets in other cities.

Khamenei said on Saturday of the “strongest sanctions in history”:

The Supreme Leader’s office and hardliners contained the Rouhani Government last week, curbing its approach of seeking European trade and investment commitments to salvage the economic situation. But as Rouhani shifted to his own line of hostility to the US, the hardliners offered no alternative for the issues over production, investment, the currency, inflation, and the environment.

The Supreme Leader, who has declared a “Resistance Economy” since 2012, gave no specific guidance yesterday on economic measures. Instead, he proclaimed, “The revolution is lasting and promising in [its] patience and piety”, and maintained his focus on resistance to the Americans:

If the US had been able to achieve its objectives alone, it would not have needed to form coalitions with disgraceful and reactionary states. Due to the strength and progress of the Islamic Republic of Iran, American enmity has increased and, of course, the hatred of the Iranian nation for the United States has been increasing day by day.

6 previous U.S. Presidents made efforts against Iran but failed at their vicious goals. Today, after losing hope in other methods, enemy’s plot is to create a rift between establishment & nation; that’s foolish: they don’t understand that establishment entirely represents nation.

Clashes During Water Protests in Southwest

Residents gathered at 11 am at the site of the weekly Friday Prayer, carrying empty plastic containers to demand drinkable water.

They chanted slogans in Persian and Arabic, “We do not need inefficient managers,” “In the name of religion, they [the Iranian authorities] plundered us,” and “Get lost, governor!”

In the evening, police fired tear gas as security forces and protesters fought.

Demonstrations have been spurred across Iran by drought and environmental damage. Farmers have been protesting water distribution project in Isfahan for months. Demonstrators in Kazeroun stormed the Friday Prayer site in April. Discontent is rising in Abadan, near Khorrashahr, over the “undrinkable” water which is “overly salty” and “has an unpleasant smell”.

Authorities say they have distributed free containers of water, but residents and media say the water circulated in Abadan is so salty that home filters are incapable of desalinating it.

The Governor-general of Khuzestan Province and other officials have promised that the water shortage will be ended in a few weeks, after the second line of the Ghadir 2 water distribution system — launched eight years ago — becomes fully operational.