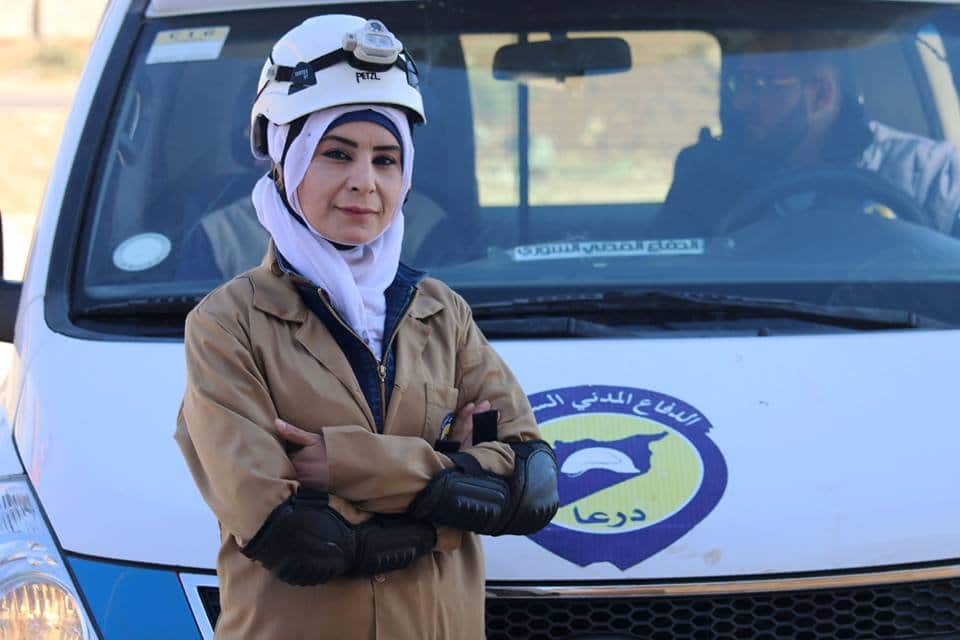 “A serious anti-extremism policy would require an end to the bombing of civilians, and the continuation of funds and support for women’s civil society groups.”

Resistance to extremism comes most successfully from local communities that have strong civil society networks and, critically, where women whose rights are most under threat actively participate.

In May, SMART News Agency, an opposition media site, released a video report addressing educational and administrative corruption at Idlib University. The university is under the governance of the Syrian Salvation Government, the civil authority wing of the powerful hardline Islamist group Hay’at Tahrir al-Sham (HTS) that is dominant in much of the rebel-held province.

One of the interviewees was a young mother named Fatima Idris. Displaced from Homs to Idlib, Fatima is a student at the university’s Media Institute. Her outspoken criticisms prompted her arrest by HTS, sparking outrage from activists and protests from female students. Fatima was released from detention two weeks later, possibly as a result of public pressure. Her case serves as an example of the continuing local resistance to authoritarian armed groups, of which women are often at the forefront.

Idlib’s liberation from the Assad regime in 2015 brought an explosion in creative attempts by the local population to self-govern their communities as state institutions withdrew. Yet the practices of hardline militant groups have threatened these hard-won freedoms.

HTS (formally Al-Qa’eda-linked Jabhat al-Nusra) has attempted to take over civil governance institutions and control basic service provision and border crossings, leading to vastly increased consumer costs for services and goods. It has clamped down on civil society activists and organisations.

Clashes between HTS and Jabhat Tahrir Suria (JTS), a coalition that comprises militant Salafist groups Nour ed-Din al-Zinki and Ahrar al-Sham, have further increased the hostility faced by Idlib’s population. The rebel in-fighting has resulted in numerous civilian casualties as well as a string of politically motivated arrests and assassinations. To many civilians, these groups are now just as bad as the Assad regime.

Yet the presence of a vibrant civil society in Idlib has allowed the population to challenge HTS’s dominance over civil affairs and protect people’s rights. Continuing protests have been held against HTS, which in some cases have resulted in their expulsion from communities, as was the case in Saraqeb.

Women have been disproportionately affected by HTS’s attempts to regulate civilian life and impose a new dictatorship. Some edicts, ostensibly issued in the name of sharia law and enforced by HTS’s religious police known as “Sawid Al Khayr”, include strict dress codes for women, preventing the mixing of males and females on buses, and requiring widows to move in with a mahram (close male relative).

Such measures have also prompted demonstrations by the local community. In Farouq camp for widows in northern Idlib, women protested against the decision to impose a mahram on them. In Idlib city, women formed volunteer groups that conducted house visits to women to counter extremist views and oppose female preachers who were trying to impose compliance with sharia law. These activities were successful in expelling such female preachers from the community.

Women’s resistance to extremism requires women’s organization, and this can pose a challenge in more conservative and traditional communities where women’s role is often relegated to the private sphere. There are more than 150 local councils in Idlib province, many of which have had their members democratically elected in the first such elections in more than four decades of Assad rule.

While women are often denied leadership roles on local councils, Idlib’s local council has established a women’s empowerment office that works to raise women’s awareness on social and political issues and support their increased involvement in public affairs.

Towards this end, women’s centres have also been established. The Syrian-led NGO Women Now for Development has two centers in Idlib, one of which runs an internet café for women. They run leadership programmes for women and many of their graduates have gone on to work in local councils. Their first centre in Idlib was established in Maarat al-Numan in 2014 and is run by Muzna al-Jundi, a 30-year-old mother of two and graduate in technical engineering. In 2016 the centre participated in preparations for the local council election.

In Kafranbel, the Mazaya center was set up in June 2013 by Ghalya Rahal in order to teach vocational skills to women allowing them to achieve financial independence, to hold discussions on women’s rights issues, and to challenge the increasing threats posed by radical Islamist groups. Today the Mazaya Organization runs eight centres in Idlib province as well as medical clinics and a women’s magazine.

Such activities have provoked the ire of extremists. On November 10, 2014, the center was subjected to an arson attack by an unknown group, and a short time later Ghalya survived an assassination attempt. The center was previously raided and damaged by Jabhat al-Nusra militants in January 2014.

The Syrian revolution provided greater opportunities for women to work outside of the home. This was partly due to conditions of war where men were often absent and unable to provide for their families. The White Helmets civil defense force contains many female volunteers and operates women’s centres in Idlib that provide women’s medical services as well as training in first aid and nursing. Most of the employees at the Union of Revolutionary Bureaus are women and they have provided media training to female citizen journalists.

One of the most popular local radio stations in Idlib, Radio Fresh, has also been in conflict with radical Islamist groups. When Nusra militants prohibited music and female broadcasters, ostensibly for contravening Islam, the radio station broadcast animal noises and digitally reworked women’s voices to sound like men in a sarcastic act of defiance. The radio’s offices have been raided by both Nusra and ISIS, and activists involved have been subjected to assassination attempts and arrests. They continue to broadcast.

The existence of extremist militant groups in Idlib Province is the justification given by the regime and its Russian ally for continuing their aerial assault. Yet these airstrikes, which usually target residential areas and vital civilian infrastructure, and which maim and kill men, women and children, create the chaos and despair in which extremist groups thrive.

The presence of such groups also provides the rationale for withdrawal of donor funding to civil society organizations over fears it may end up in the wrong hands. Yet the resistance to extremism comes most successfully from local communities that have strong civil society networks and, critically, where women whose rights are most under threat actively participate. A serious anti-extremism policy would require an end to the bombing of civilians, and the continuation of funds and support for women’s civil society groups.