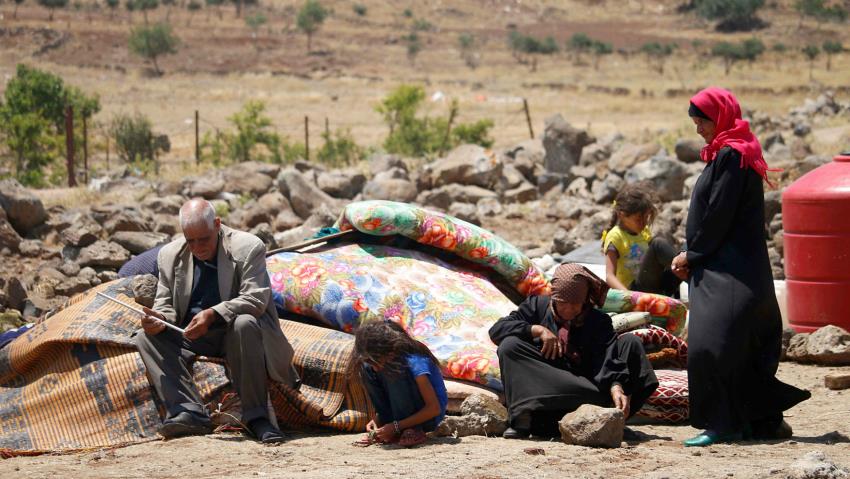 Pro-Assad forces celebrated in southern Syria on Saturday, raising regime flags at the Nassib border crossing with Jordan for the first time since 2015.

Meanwhile, about 320,000 people — displaced since June 19 by the pro-Assad ground assaults and Russian and regime bombing of Daraa Province — are considering whether to return to their homes.

On Friday, rebels in most of Daraa, where the Syrian uprising began in March 2011, agreed a surrender with Russian officers. They will give up their heavy weapons in return for a Russian guarantee of the safe return of the displaced.

The regime hosted a media tour of the Naseeb crossing yesterday, with photos of Bashar al-Assad placed on a checkpoint at the entrance. Dozen of regime soldiers, accompanied by Russian military police and armored vehicles with the Russian flag, were on patrol.

A convoy of tanks and vehicles, with hundreds of forces and regime flags, appeared to be moving towards western Daraa Province, where the opposition still holds several towns. A commander said, “I believe they will decide to return to the state’s embrace, and if they are late in doing so, then we are ready to end it militarily.”

“Russia and Regime Offer No Safety”

Unconfirmed claims said about 28,000 people are returning to homes in eastern Daraa Province, and Jordanian army and civilian medical workers on the border — where about 60,000 are gathered — reported a sharp drop in the number of cases they received after the announcement of Friday’s capitulation deal.

But many of those in makeshift camps showed no intention of returning.

Umm Abdul Salam fled with her husband, son, and daughter when the village of Hirak was bombed last week. “For God’s sake, let us in. We don’t want food or water and we just want safety,” she pleaded to Jordanian troops at the Jaber crossing.

“There is no word of what happened to the people who returned yesterday,” she said. “Many families who returned to their areas have been killed by the regime and the militias even after four or five months.”

About 160,000 people have gathered near the Israeli-occupied Golan Heights. Both Jordan and Israel are denying entry, although the Israeli Defense Forces have been providing humanitarian assistance such as food, medicine, and clothes.

Osama al-Homsi, 26, said he was hesitant to return to his hometown of Jeeza:

Of course I support the agreement to stop the fighting and bloodshed. “But what is frightening is that it comes with no UN guarantees….The Russian and the Syrian regime offer no safety….[Only] if we are guaranteed that no one will pursue us, will we want to return.

After past recaptures of opposition territory, such as eastern Aleppo city in December 2016 and East Ghouta near Damascus in April, regime forces have abducted, detained, and forcibly conscripted residents.