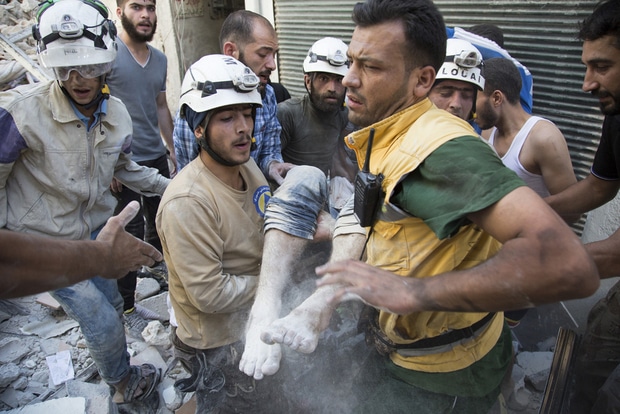 “Skin Falling Off Their Flesh”: A White Helmets Rescuer Recalls His Detention
Assad Regime to 100s of Syria’s Parents: Your Children Died in Detention

Bashar al-Assad has called for Syria’s White Helmets rescuers to be killed like “terrorists”.

Days after 422 White Helmets volunteers and family members were moved from southern Syria to Jordan, to block retaliation by the regime, Assad illustrated the threat. Speaking with Russian journalists, he set up the warning with the long-standing falsehood, promoted by Russia, of armed civil defense workers:

The fate of White Helmets will be the same as any other terrorist. They have two choices: to lay down their arms and use the amnesty we have offered over the last four or five years, or be killed like the other terrorists.

The White Helmets have provided rescue and recovery operations for opposition territory since they were created in 2013. The organization and pro-opposition activists say they have saved more than 115,000 lives.

The volunteers have also angered the regime and Russia by documenting pro-Assad assaults and mass killings, including with chemical weapons. They are not armed, except for isolated cases where members have carried weapons for self-defense from regime troops.

Assad repeated the attempt to discredit the organization with more false assertions:

It’s a mask, a mask for [the jihadist faction Jabhat] al-Nusra. You have videos and photos of this group’s members holding swords and celebrating the death of Syrian soldiers.

What more evidence do you need that they are not a humanitarian organization, but a mask used by al-Qa’eda?

Canada initiated last weekend’s evacuation of 98 White Helmets and 324 relatives. European states such as the UK and Germany supported the operation by the Israeli Defense Forces to move the rescuers to Jordan before they go to Canada or the European states.

Almost 400 other volunteers and family members could not be transferred because of obstacles by pro-Assad forces and the Islamic State in southwest Syria, where most opposition territory has been seized by a pro-Assad offensive — enabled by Russian bombing — that began June 19.

In other cases of pro-Assad occupation, such as the capture of East Ghouta near Damascus in April, White Helmets have been able to go to the last major opposition area in northwest Syria.

Assad also said that the Russian military should remain in Syria for the long term and possibly permanently.

“Russian armed forces are needed for balance in our region, at least in the Middle East, until the global political balance changes. And this might not even happen, we do not know. So it is important and necessary,” he declared.

He noted the regime’s agreement with Russia for a stay of more than 40 years in the Hmeimim military base, the central position for staging of Moscow’s forces.

Assad also issued a message to 6.6 million people who have fled the country, with more than 5 million displaced inside Syria: “We call on refugees, especially on Syrians who had businesses here, to return.”

A top Russian offical has asked the international community to give the Assad regime money for the 6.6 million refugees.

Alexander Lavrentyev, Moscow’s envoy for the Syrian crisis, said the regime cannot provide much financial help so foreign donors should step in, without politicizing the issue.

The abiilty of Russia, the essential backer of the regime, to provide assistance is limited by its own economic situation. Earlier this week, Moscow hailed a French provision of aid to East Ghouta near Damascus — reoccupied by the regime in April — as a sign pointing to international support of assistance and reconstruction.

Laventyev maintained that refugees can now come back to regime areas in Syria, even though the UN says conditions for return are not yet fulfilled.

The envoy, who met Bashar al-Assad on Wednesday, insisted:

[The Assad regime is] really willing to accept all those who want to come back to their homes.

Scores of victims have been buried in Sweida city in southern Syria, following Wednesday’s Islamic State attacks that killed about 215 people.

The toll was the largest for the city, with a majority Druze population, in Syria’s 88-month conflict.

Thousands gathered as coffins, covered in Syrian and Druze flags, were brought from the main city hospital. Angry at the Assad regime, residents prevented the Governor of Suweida Province, Amer al-Ashi, and other regime representatives from attending the funeral. Local groups set up checkpoints across the city to prevent further attacks.

ISIS raided eleven towns villages about 4 am, in some cases using local Bedouin as guides, and carrying out four suicide bombings in Sweida.

The attackers knocked on doors – sometimes calling out people by name – and slaughtered families residents said. Sometimes one member of the family would be spared to testify to the brutality.

ISIS deployed snipers outside the town limits, and took up entrenched positions in the towns before they were pushed out by local youth and militiamen.

The assault came as pro-Assad forces, seizing territory in southern Syria, are moving on an ISIS-linked group in western Daraa Province.

Rebel sources said they put reinforcements into the mountainous highlands of Latakia, overlooking western Idlib. Several lines of fortifications have been established along a 2-km front.

Idlib is the last major opposition area in Syria. Nominally, it is under a “de-escalation” agreement between Russia, Iran, and Turkey. However, Russia has broken other de-escalation arrangements, including the enabling of pro-Assad captures of East Ghouta near Damascus and most opposition territory in southern Syria.

The Assad regime has vowed to reoccupy “every inch” of Syria. On Thursday, Bashar al-Assad said his forces, nearing completion of the southern Syria operations, will be targeting “terrorists” in Idlib.

The pro-opposition sites say the Turkish army, which has secured much of northwest Syria alongside rebels since August 2016, is strengthening its ring of observation posts around Idlib.