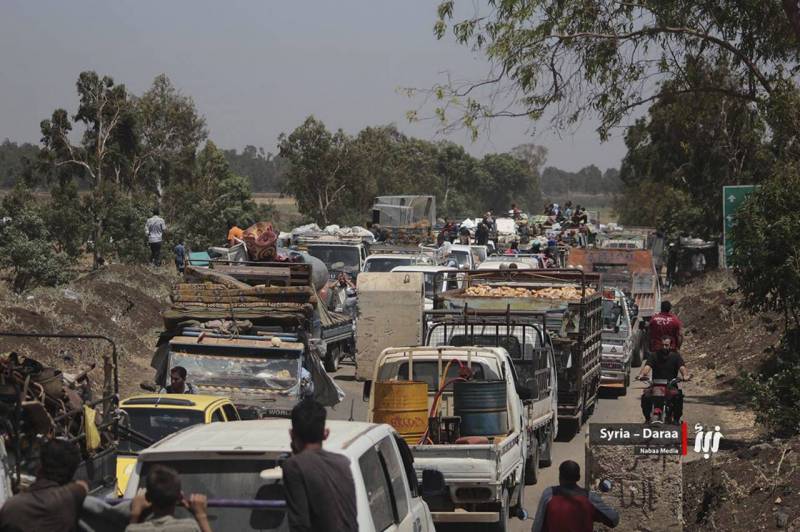 The talks in the historic town of Bosra al-Sham, on the Jordanian border, collapsed after rebels rejected terms proposed by Russian officials.

The discussions were considering whether regime control would be re-established, but without the regime’s army or police entering the area. Russian military police would instead be the physical presence for “security”.

After a similar breakdown in East Ghouta near Damascus in April, the Assad regime used a double chemical attack on the town of Douma to force a rebel capitulation. Russian and regime forces then took over, with about 50,000 people forcibly displaced to northern Syria.

Pro-Assad forces expanded their offensive in southern Syria on Friday, with further bombing and confirmation of the presence of Russian personnel and Iranian-led militia on the ground.

Pro-opposition activists said the intense airstrikes, which have contributed to the displacement of 160,000 people since June 19, had begun to crack resistance in several towns with reports of demands for “reconciliation” — surrender — to the Assad regime and its foreign allies.

Regime media claimed the capture of towns and villages northeast of Daraa city, where the Syrian uprising began in March 2011. State news agency SANA dropped the pretense that the assault is against the jihadists of Jabhat al-Nusra — who do not have an organized presence in Daraa Province — and merely referred to “terrorists”.

The Russian veneer of an offensive solely by the Assad regime’s troops also collapsed with photo confirmation of both Moscow’s “mililtary advisors” and Iranian-supported militia, such as Liwa Abu al-Fadl al-Abbas fighters, on the ground.

#Syria: No surprises here: Liwa Abu al-Fadl al-Abbas of the Republican Guard is participating in the Deraa campaign pic.twitter.com/RKNAemYe6x

Russia had already acknowledged on Monday that its warplanes are breaking a “de-escalation zone” proclaimed by Moscow and the US last July. The Defense Ministry’s official line is that it is bombing the non-existent Jabhat al-Nusra and Islamic State, as civilian sites are struck to assist the pro-Assad advance and break opposition.

A “Jordanian official source” — possibly expanding on the reports of “reconciliation” — said that a ceasefire has been agreed for southern Syria, and Lebanon’s Hezbollah proclaimed that a “very big victory” is near.

Despite “reconciliation” and Hezbollah’s statement, rebels in other towns continued to show their defiance, claiming casualties among the pro-Assad forces including a 5th Corps Commander.

Meanwhile, the US appeared to drop its public line that it would take “firm” action against any offensive. A State Department official merely said the situation in southern Syria remains “grim” amid the bombing.

The US had warned four times since last May that it would respond to a pro-Assad assault in Daraa and Quneitra Provinces, near the Jordanian border and the Israeli-occupied Golan Heights. However, soon after the offensive began on June 19, officials from the US Embassy in Amman told rebels that they could not count on American intervention.

Israel also has put aside its threats to intercede if Hezbollah and Iranian-led forces are in the offensive. Instead, the Israel Defense Forces say they are providing aid to an estimated 50,000 displaced people, but will not allow them into the Israeli-controlled Golan Heights.