Iran Daily: Rouhani and Military — We Can Retaliate Against US Sanctions 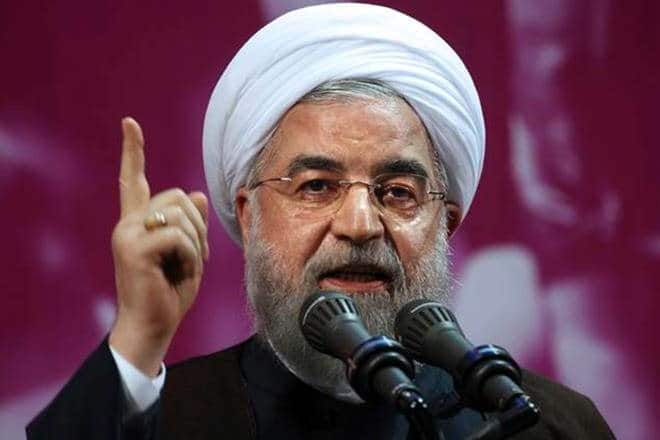 Displaying his firmer line against Washington, Rouhani said on a visit to Austria, “The Americans say they want to reduce Iranian oil exports to zero….It shows they have not thought about its consequences.”

The President did not specify measures, but Iran’s military commanders have threatened to block the Strait of Hormuz at the top of the Persian Gulf, cutting off oil tankers.

On Tuesday in Switzerland, Rouhani fired another verbal shot at the Trump Administration, The idea that everybody can export oil, except for Iran, is incorrect and unwise.”

The head of Iran’s elite Quds Force, Maj. Gen. Qassem Soleimani, praised the tough-talking Rouhani yesterday, “I kiss your hand for expressing such wise and timely comments, and I am at your service to implement any policy that serves the Islamic Republic.”

Soleimani’s effusive letter was in sharp contrast to hardline criticism last week that hinted at pushing Rouhani off of office. The Supreme Leader’s military advisor, Gen. Yahya Rahim Safavi, said, “Sometimes it seems the country would be managed better and in a more appropriate way without the government.”

After Rouhani sharply condemned the US in a speech last Wednesday, complementing the Supreme Leader’s comments on the same day, hardliners pulled back the threat against the President.

The US military responded to yesterday’s remarks with a pledge to keep the Strait of Hormuz open. Capt. Bill Urban, a spokesman for Central Command, said US forces “stand ready to ensure the freedom of navigation and the free flow of commerce wherever international law allows”.

Rouhani: We May Leave Nuclear Deal

In a further warning — and sign that his tactic of negotiations with the European Union is on the verge of failure — Rouhani said European leaders must “guarantee” that Iran continues to enjoy the benefits of the July 2015 nuclear deal, or otherwise Tehran could leave the agreement.

After Donald Trump’s May 9 withdrawal of the US, Rouhani and Foreign Minister Mohammad Javad Zarif have been pushing the EU and its members not only for political support but also for the trade and investment needed for Iran’s fragile economy. However, the Europeans have been unable to provide shelter for large companies threatened with American punishment if they continue links with Tehran, and Rouhani has been under pressure from hardliners — including the Supreme Leader — demanding guarantees.

During a meeting in Vienna with the head of the International Atomic Energy Agency, Yukiya Amano, Rouhani said:

Iran’s nuclear activities have always been peaceful, but it is Tehran that decides on the level of its cooperation with the IAEA.

The responsibility for a change in the situation and the level of Iran’s cooperation with the agency falls on those who have created the new status quo.

The President again implicitly referred to Iran’s urgent need for economic links, “The other signatories have the responsibility to counter this move and compensate for the imbalance of the commitments.”

Japan, South Korea, and India have all been key customers for Iran’s oil amid US sanctions, but all three countries are reducing their purchases amid the expanding US sanctions.

See Iran Daily, July 2: Tehran — We Will Maintain Oil Exports, Despite US Sanctions, With “Private” Sales