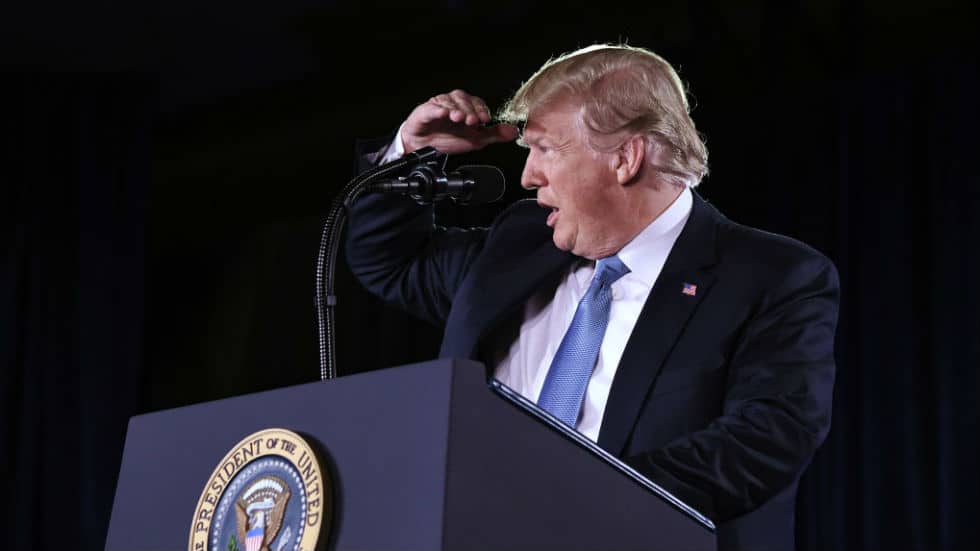 Defying criticism and distancing himself from Wednesday’s statement that immigrant families will be reunited, Donald Trump exalts his campaign against immigration as he looks towards November’s Congressional elections.

Trump used Twitter and an appearance in Nevada on Saturday to bash immigration and Democrats and put out his series of dubious and untrue assertions, a day after he appeared with relatives of murder victims and falsely announced that “63,000” Americans had been killed by “illegal aliens” since September 2001.

Meanwhile, chaos and uncertainty continued over the Administration’s “zero tolerance” detention of about 2,800 children separated from undocumented immigrants parents since April. A “senior Administration” said on Saturday that all the children would be returned to parents by the end of the day, but as of last night, only 522 had been reunited with another 16 planned for today.

Some Government officials initially said that Trump’s announcement on Wednesday did not cover those children seized when their parents crossed the US border. Attempts to end detentions and reconnect families have been further complicated because adequate records were not kept for many juveniles, as some children — as young as three months old — were sent many hundreds of miles away to states like New York and Michigan.

Protesters began to gather outside some detention centers, but at others, officials continued to block legislators and journalists from entering or restricting their visits to see conditions — while saying that there is no provision to reunite children and parents.

Just visited the Homestead, Fla. facility where 70 kids who were separated from their families are being held. They would not let me see the kids. They told me they have no plan in place to reunify them with their parents. pic.twitter.com/mpwOP7eNKv

The American Red Cross confirmed on Friday that they have been denied permission to provide assistance to the detention centers.

We share everyone's concern about the border situation and stand ready to help. We have offered assistance to federal gov't authorities, but without permission, we can't access facilities. Here’s a list of trusted organizations providing assistance: https://t.co/HfU4LTviUz

The Washington Post tells the story of one father and child likely to be separated for some time:

Arnovis Guidos Portillo remembers the authorities in green uniforms telling him that this would only be temporary.

They told him that his 6-year-old daughter, Meybelin, should really go with them, he recalled. The holding cell was cold, he said he was told, and the child was not sleeping well. Don’t worry, he was assured, she would take the first bus, and he would follow soon.

“What’s best is we take her to another place,” he recalled a U.S. official telling him.

It’s a conversation this 26-year-old farmer from El Salvador has replayed for nearly a month. His daughter was taken from him on his second day in U.S. immigration custody in Texas, he and his lawyers said, and she remains somewhere in the United States.

Guidos was deported Thursday back to this small Central American nation, where he lives in a one-room, dirt-floor shack with no electricity and two goats in the yard.

After his mid-week wobble, Trump was in attack mode on Saturday, fully promoting the strategy — reportedly promoted by White House advisor Stephen Miller — that a hardline anti-immigration message will bring Republican victories in the mid-term Congressional elections.

He interspersed endorsements of GOP candidates with tweets spreading false information about immigrant children — “OBAMA KEPT THEM IN CAGES” — and asserting that Democrats “want to protect illegal immigrants far more than the citizens of our country”.

Trump did not mention his abandonment of GOP immigration legislation, effectively ensuring limbo over the issue through the summer. Instead, he used a rally in Nevada for Republican Senator Dean Heller, who faces a re-election challenge, to mark out the likely campaign themes: the prospect — so far mythical — of an agreement with North Korea, trade protectionism, economic growth, and stigmatizing of immigration.

He then repeated his false mantra of immigrants causing a “tremendous” flow of violence into the US, an assertion defying the record of a declining American crime rate and immigration having no effect on criminal behavior.

Trump summarized his approach, “I like the issue for the election. Our issues is Strong Borders, No Crime.”Tru

In a marker of the hardline, defiant approach, Trump took former campaign manager Corey Lewandowski on the trip. Last week, in a televised discussion, Lewandowski mocked an advocate who spoke of the detention of a 10-year-old child with Down’s Syndrome:

While Lewandowski was criticized for his “Womp womp” derision of the case — and was even dropped by his speaker’s bureau from highly profitable appearances — last night he “was swarmed by fans who sought selfies with one of the president’s more prominent cable news warriors”.

A social media argument broke out on Saturday after Press Secretary Sarah Huckabee Sanders — possibly in violation of ethics rules — used Twitter to say she was asked to leave a northern Virginia restaurant.

Last night I was told by the owner of Red Hen in Lexington, VA to leave because I work for @POTUS and I politely left. Her actions say far more about her than about me. I always do my best to treat people, including those I disagree with, respectfully and will continue to do so

The owner of the 26-seat restaurant, Stephanie Wilkinson, said she was phoned on Friday night by the chef, who said staff — several of whom are gay — were upset over Sanders’ defense of Trump’s ban on transgender military personnel and on the policy of separating immigrant children from paretns.

“Tell me what you want me to do. I can ask her to leave,” Wilkinson told her staff.

She added, “They said yes.”

Calls from Trump supporters immmediately called for a boycott of the Red Hen, as well as of other similarly-named restaurants in northern Virginia.

But Wilkinson was resolute on Saturday:

Whatever happens, we will soldier on. Absolutely, yes, I would have done the same thing again….

I’m not a fan of confrontation. I have a business and I want the business to thrive. But this feels like the moment in our democracy when people have to make uncomfortable decisions to uphold their morals.

Meanwhile, analysts noted that Sanders is likely to have violated Government ethics rules by using her official Twitter account to pressure Red Hen. One of them was Walter Shaub, the former head of the Office of Government E

Sanders used her official govt account to condemn a private business for personal reasons. Seeks to coerce business by using her office to get public to pressure it. Violates endorsements ban too, which has an obvious corollary for discouraging patronage. Misuse reg covers both.

The incident is the latest in a series of criticisms of Trump officials in public places. Last weekend Homeland Security Secretary Kirstjen Nielsen left a Washington restaurant as protesters cried, “Shame on you.” Hardline advisor Stephen Miller, the driving forces behind the separations and detentions policy, was greeted with a shout of “Fascist” as he dined.

Some social media commentary noted possible hypocrisy in Sanders’ position, given her recent statements over immigration.

my god imagine being forcibly separated from your family…style eatery https://t.co/uHMJcPUiXS

Others compared Sanders’ reaction with the Trump Administration’s support of businesses being able to deny service to lesbian and gay couples.

Nancy Pelosi introduces her campaign committee for the take back of the House. pic.twitter.com/yKDhkVubck

On Thursday, House Minority Leader Pelosi criticized the separations and detentions policy in a speech to Democrat lawmakers: “You come near our cubs, you got a problem. And we consider these [immigrant] children our children.”

Trump and his allies have often used MS-13 as a marker to portray undocumented immigrants as criminals and even “animals”.

Ben Ray Luján, the chairman of the Democratic Congressional Campaign Committee, responded with another image of Hispanics:

So you can get your names and faces right @GovMikeHuckabee, @DanRSena is another one of my @DCCC #Hispanic #ChangeMakers who is very much looking forward to taking back the House. #NovemberToRemember https://t.co/CvHgxycnUq