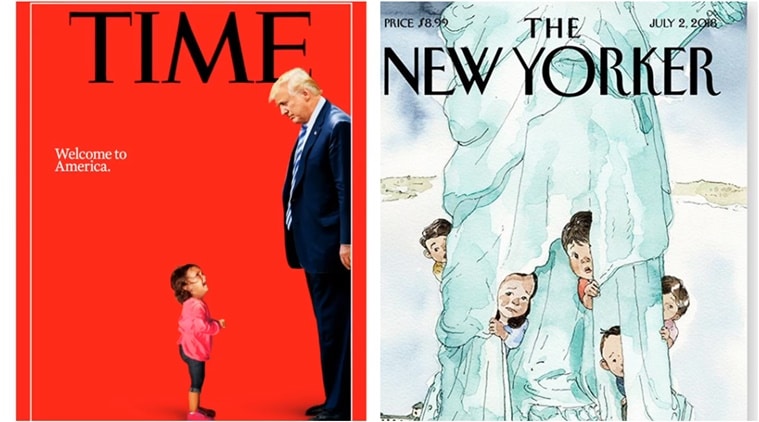 A Justice Department supervisor in San Diego sent an e-mail to border authorities warning that immigration cases “will occupy substantially more of our resources”. He wrote that the US Attorney’s Office is “diverting staff, both support and attorneys, accordingly”.

The e-mail, from the lawyer who runs the office’s major crimes unit, said prosecutors needed to streamline their work on smuggling cases, with sometimes just a few hours to produce reports and recordings.

UPDATE 1530 GMT: Another note on Trump’s appearance alongside the relatives of murder victims:

Trump autographed the pictures of the victims that each family member was holding. After the signatures, he held up the poster of one of the slain and compared him to the actor Tom Selleck. 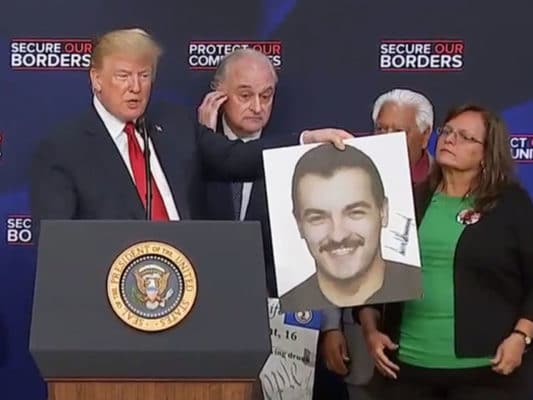 UPDATE 1330 GMT: Among the lies and distortions put out by Donald Trump on Friday was this claim, as he was flanked by relatives of murder victims:

The assertion is untrue, stemming from a blog post written in 2006 by GOP Representative Steve King of Iowa.

Trump learned of the “63,000” figure in March as he hosted a roundtable on sanctuary cities at the White House. Guest Mary Mendoza — the mother of a police officer killed in 2014 by an undocumented immigrant who was driving drunk — asserted that there was an “unchecked…crime spree” in which “over 63,000 Americans have been killed since 9/11 by illegal aliens”.

“Boy. That is some number,” Trump said. “I’ve never heard that number before. That’s an incredible number.”

But there was no factual basis for Mendoza’s claim. It stems from the blog entry of King — a fiercely anti-immigrant legislator — who made a series of speculative and erroneous assumptions to proclaim, that without undocumented immigrants, “The lives of 12 U.S. citizens would be saved who otherwise die a violent death at the hands of murderous illegal aliens each day.”

UPDATE 1130 GMT: The Republican presiding officer tried to halt Democrat Congressman Ted Lieu from playing audio of crying and traumatized immigration children, during Lieu’s speech in the House of Representatives on Friday.

The audio was secretly recorded by ProPublica during a tour of a detention facility, with the children pleading to speak with their parents. A border officer laughed, “Well, what an orchestra here. We only need a conductor.”

Lieu responded, “These are babies and children in a detention facility. Why are you not letting the American people hear what they are saying?”

UPDATE 1115 GMT: An 8-year-old boy, separated from his father at the US border, is expected to represent himself in immigration court.

“Pedro” does not have legal counsel or a right to a public defender. He entered Arizona with his father last July, and was one of the first immigrant children to be separated from parents under the Trump Administration’s “zero tolerance” policy.

Pedro was released into the custody of his aunt, who contacted the non-profit group Americans for Immigrant Justice for legal aid and to searching for Pedro’s father. So far, they have not uncovered any information about his whereabouts.

According to Jennifer Anzardo Valdes of AIJ, Pedro said border officers “threw his father to the ground and stomped on him” before separating the two. The agents did not speak Pedro’s indigenous Guatemalan language, Acateco.

Trying to regain the offensive amid criticism of his “zero tolerance” policy separating immigrant children from their parents and detaining them, Donald Trump launches a series of verbal attacks.

Trump’s apparent step back on Wednesday, when he signed a piece of paper and said separations must stop — but then did nothing to carry out the declaration — was erased on Friday. He issued false claims about crime rates and brought in family members of people slain by immigrants.

Our first duty, and our highest loyalty, is to the citizens of the United States. We will not rest until our border is secure, our citizens are safe, and we finally end the immigration crisis once and for all. pic.twitter.com/7YfZ9kjB23

Trump also implicitly accused undocumented immigrants, advocates, and lawyers of making up the accounts of children traumatized as they were taken from parents and put in detention hundreds and sometimes thousands of miles away:

We must maintain a Strong Southern Border. We cannot allow our Country to be overrun by illegal immigrants as the Democrats tell their phony stories of sadness and grief, hoping it will help them in the elections. Obama and others had the same pictures, and did nothing about it!

The tactic verged on the adoption of the “child actor” line put out by hard-right polemicist Ann Coulter on Monday.

Trump concluded the day with the hysterical portrayal, “We have to maintain strong borders or we will no longer have a country that we can be proud of – and if we show any weakness, millions of people will journey into our country.”

Chaos in the White House Amid Plans for More Detainees

Trump’s aggressive stance on Friday appeared to be a cover for a White House in chaos after his Wednesday document-signing show.

One option floated by the Administration is the detention of children with their parents, but this would violate a 1997 court order against any imprisonment of more than 20 days. Kevin McAleenan, the commissioner of Customs and Border Protection, asked White House staff yesterday how the detentions can be carried out in the face of the law, which the Justice Department is challenged in a submission to a Federal court judge.

In contrast, the Justice Department is insisting — both in an argument with CBP and in a competing leak to the press — that there is no change to the “zero tolerance” detentions of immigrants, often before they can reach US ports of entry to apply for asylum.

The Pentagon has been ordered to plan for the detention of up to 20,000 people on four US military bases. But White House staff and agencies could not say whether the detentions are of those currently being held or those to be picked up in future, and whether the detainees will be only children or will include families.

It is shockingly difficult for immigration attorneys to locate children separated from their parents at the border. Today I spoke to lawyers who represent more than 400 parents. They've located two children.

Meanwhile, Trump was returning to his hard line on Tuesday, when he had told a rally that he had no executive authority to end the separations and detentions. “One person close to the President” said that Trump is telling advisors that the separations are the best deterrent to undocumented immigration: “My people love it.”

An image modifying the jacket worn by Melania Trump, “I DON’T CARE. DO U?”, en route to her PR appearance at a Texas detention center on Thursday: 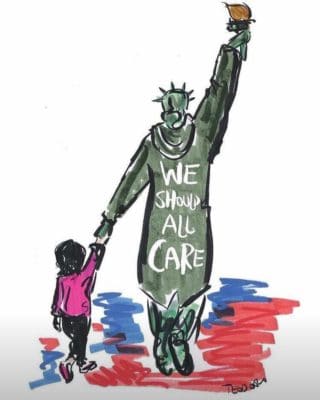 Trump also effectively destroyed the Republican attempt in Congress to pass an immigration bill which would also ease the separations crisis.

Some Republicans in the House of Representatives are hoping to adopt a compromise proposal next week covering Trump’s Wall with Mexico, cuts to legal immigration and refugee admissions, and an end to the Visa Diversity Lottery Program.

The effort faces an uphill battle, however, because other Republicans object to a clause giving a long path to citizenship for about 800,000 “Dreamers”, who came to the US as children with their undocumented immigrant parents. A hardline GOP bill without the provision was rejected on Thursday.

But yesterday Trump — who had refused to back either bill — binned the effort while trying to divert blame to the Democrats:

Republicans should stop wasting their time on Immigration until after we elect more Senators and Congressmen/women in November. Dems are just playing games, have no intention of doing anything to solves this decades old problem. We can pass great legislation after the Red Wave!

GOP Representative Will Hurd of Texas, a backer of a bipartisan bill which Speaker Paul Ryan refuses to take up, reacted: “I think it’s time for Congress to stand up and actually write a permanent legislative fix for DACA; it’s time for us to prevent this notion of taking babies from their mothers; it’s time that we should make sure we actually secure our borders.”