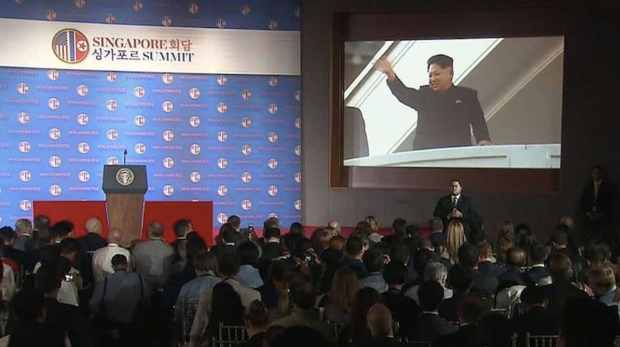 Developments on Day 509 of the Trump Administration:

Trump on Kim: “His Country Loves Him”

While celebrating his personal meeting with Kim Jong-un, Donald Trump — apparently without informing US and South Korean officials — makes his first major concession to the North Korean leader with whom he says he has formed a “very strong bond”.

Before leaving Singapore, Trump said the US will halt “war games”, North Korea’s term for the US-South Korea joint military exercises that have been held for decades.

In a televised interview, he justified the surprise announcement:

The war games are very expensive; we paid for a big majority of them, we fly in bombers from Guam. That’s a long time for these big massive planes to be flying to South Korea to practice and then drop bombs all over the place and then go back to Guam. I know a lot about airplanes, it’s very expensive.

He appeared to make the change in policy and operations without consulting his military. The US Forces in Korea command issued a statement that it had “received no updated guidance on execution or cessation of training exercises” and that it planned to “continue with our current military posture”.

A South Korean official said, ”Regarding President Trump’s comment regarding ending of the combined military drills..we need to find out the exact meaning or intention behind his comments at this point.”

Trump made his move after five hours of photo opportunities with Kim, with the US President proclaiming the personal chemistry and, setting aside issues such as human rights in North Korea, effusing, “His country does love him. His people, you see the fervor. They have a great fervor.”

The public appearances, after a 45-minute meeting between Trump and Kim with only translators and then a session with advisors, culminated in the signing of a brief, four-point document.

The statement defied Trump’s insistence that Pyongyang will meet the US demand of “complete denuclearization”, saying only that the two sides will “work towards complete denuclearization of the Korean Peninsula” — the same commitment that North Korea made in 1994 at the outset of an Agreed Framework on its nuclear programs, and the same wording used in the historic summit between Kim and South Korean leader Moon Jae-in on April 27.

The document’s other points covered intentions for better US-North Korean relations, the pursuit of a “stable peace regime on the Korean Peninsula”, and the return of remains of POWs and MIAs from the 1950s Korean War.

The statement said Secretary of State Mike Pompeo will meet with a “relevant high-ranking” North Korean official at the “earliest possible opportunity”.

North Korean media celebrated a position of “equality” with the US after almost 70 years of confrontation — and said that Trump is ready to lift sanctions when relations improve — while the White House accompanied Trump’s final press conference in Singapore with a video which some reporters initially mistook as coming from Pyongyang.

In a rare moment of uncertainty — and admission of his tactics — Trump said:

I think, honestly, I think [Kim] is going to do these things. I may be wrong. I mean, I may stand before you in six months and say ‘Hey, I was wrong.’ I don’t know that I’ll ever admit that, but I’ll find some kind of excuse.

He initially celebrated on Twitter after returning to Washington:

The World has taken a big step back from potential Nuclear catastrophe! No more rocket launches, nuclear testing or research! The hostages are back home with their families. Thank you to Chairman Kim, our day together was historic!

But his mood immediately soured amid questions about the outcome of the summit:

A year ago the pundits & talking heads, people that couldn’t do the job before, were begging for conciliation and peace – “please meet, don’t go to war.” Now that we meet and have a great relationship with Kim Jong Un, the same haters shout out, “you shouldn’t meet, do not meet!”

He made no reference to his announcement of the end of the US-South Korean military exercises.

Senior lawyer Joel McElvain has resigned after the Justice Department said it will no longer defend the Affordable Care Act in court.

McElvain, with more than 20 years of services, spent recent years working on the case — an effort which has now been reversed by the Department’s refusal. In 2013 he and his team were honored with an award for “exceptional service” from the Attorney General.

Several colleagues said McElvain had been in line to become director of the Justice Department’s federal programs branch, which handles complex government policy questions in courts.

Just before the Justice Department’s announcement of its refusal, McElvain and two other lawyers who had been defending the ACA withdrew from a case which was pending in a Texas court.

Attorney General Jeff Sessions told the court and Congress that the Justice Department changed its position with Trump’s approval.

The Trump Administration failed to pass legislation to repeal ObamaCare last year, so has been working with other methods to weaken the program. December’s $1.5-trillion tax cut legislation had a provision stripping the individual mandate from the ACA. Under that provision, most people were required to pay a financial penalty each year if they failed to maintain minimal health-care coverage.

After the Republican-controlled Congress passed the Jobs Act last year, eliminating the penalty, 20 states and two individuals have brought a suit against the Federal Government claiming the ACA is now unconstitutional.

The Trump Administration is considering detention camps at military posts around Texas for unaccompanied immigrant children.

Department of Health and Human Services staff will visit Fort Bliss, near El Paso, in coming weeks to look at land for camps to hold between 1,000 and 5,000 children.

HHS officials are also looking at Dyess Air Force Base in Abilene and Goodfellow AFB in San Angelo.

The number of children held in Government custody without their parents has increased more than 20% amid the Trump Administration’s “zero tolerance” policy, including the break-up of border-crossing families.

The Office of Refugee Resettlement at HHS is responsible for the care of more than 11,200 immigrant children being held without a parent or guardian. About 100 shelters are now 95% occupied.

An HHS official justified consideration of the camps because of the need to have some shelter for juveniles, “The lack of parental protection, and the hazardous journey they take, make unaccompanied alien children vulnerable to human trafficking, exploitation and abuse.”

Ivanka Trump and her husband Jared Kushner earned at least $82 million in outside income in 2017, despite serving as senior White House advisers.

Financial disclosure forms showed Ivanka Trump earned $3.9 million from her stake in the Trump International Hotel in Washington and more than $2 million in severance from the Trump Organization. Kushner reported over $5 million in income from Quail Ridge, a Kushner Companies apartment complex acquired last year in Plainsboro, New Jersey.

Both Kushner and Trump say they have given up daily oversight of their companies, but they maintain large stakes in businesses with domestic and foreign ties. Trump’s clothing and accessories line is produced exclusively in foreign factories in countries such as Bangladesh, Indonesia, and China, which granted a series of licenses to her this year amid political and economic discussions between the Trump Administration and Beijing.