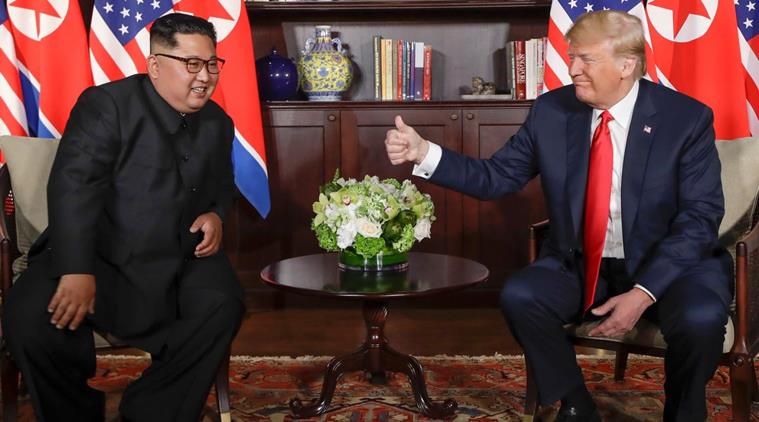 As the cameras clicked for Donald Trump and North Korea’s Kim Jong-un on Tuesday, I spoke with BBC outlets and talkRADIO about the contrast between Trump’s reality TV show and North Korea’s maneuvers to take advantage of the summit.

While Trump got his historic photographs, Pyongyang has already achieved international recognition — on a level of equality with the US — and has given up nothing around its nuclear weapons and long-range missile programs and kept “human rights” at bay.

Kim and his inner circle have also won the first major American concession: Trump announced after Kim’s departure that the US is suspending “war games” (North Korea’s term), the long-running joint military exercises with South Korea.

Trump gets his photo opportunity, but already North Korea is getting the concessions, even before the heavy-duty diplomacy that has to follow.

We definitely have something historic, but a lot of this is being driven not by joined-up thinking over politics and the military situation. It’s a combination of Trump’s desire for a photo opportunity and North Korean calculations.

It’s always a good thing to pursue diplomacy, but you need to prepare if you’re going to have agreements that last.

What happens now is either that people get down to details or this will be in the hands of the whims of the President.

#RT @talkRADIO: Commentator: “Donald Trump’s summit was like political Love Island. The question is: what substance do you have behind that?” Does the document signed by Trump and Kim Jong-un mean anything? Watch again ▼@JuliaHB1 | @ScottLucas_EA |… pic.twitter.com/mTtpfbf4tw

International relations depends on predictability and reliability, and rDight now you’re relying on the whims of this President and how he is feeling at any moment in time.

In an interview with BBC Ulster before the Trump-Kim appearance, David Dunn of the University of Birmingham explains why the Trump approach is a vague substitute for diplomacy and why North Korea has already “won”.

What Trump is doing is rewarding them by giving them status as a nuclear power, legitimizing them as worth talking to, taking them seriously. In doing so, Kim has won….no matter what he does, by avoiding American attack for the next two years.