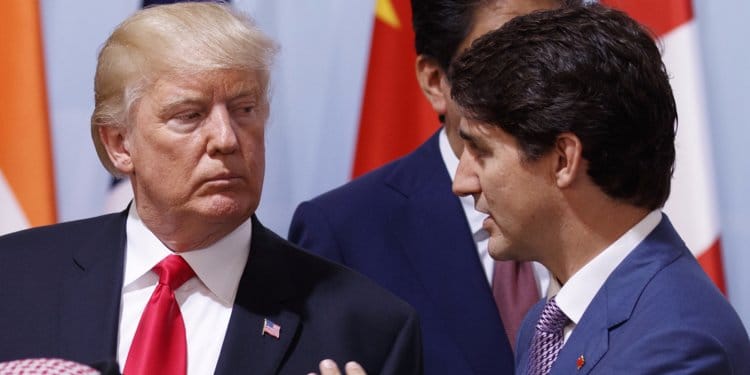 Developments on Day 503 of the Trump Administration:

“Didn’t You Guys Burn Down the White House?”

Sources revealed on Wednesday that Trump raised the stakes over his steel and aluminum tariffs on Wednesday in a “testy” phone call on May 25 with Prime Minister Justin Trudeau of Canada, the largest steel exporter to the US.

Trudeau pressed Trump oh how he could justify the 25% steel tariff and 10% aluminum duty, announced in early March and confirmed at the end of May, as a “national security” issue.

Trump replied, according to the sources, “Didn’t you guys burn down the White House?” during the War of 1812.

In fact, while Canada was a British colony at that time, it was the United Kingdom’s forces which carried out the raids in Washington.

If Trump was trying to make a joke, it did not go down well. One source explained, “To the degree one can ever take what is said as a joke. The impact on Canada and ultimately on workers in the US won’t be a laughing matter.”

Last Sunday, Trudeau told the prominent US talk show Meet the Press, “The idea that we are somehow a national security threat to the United States is, quite frankly, insulting and unacceptable.” Foreign Minister Chrystia Freeland added on CNN’s State of the Union, “I would just say to all of Canada’s American friends — and there are so many — seriously? Do you really believe that Canada, that your NATO allies, represent a national security threat to you?”

There is no reason to use this provision to consider imposing tariffs on the automobile industry, and this appears to be either an attempt to affect domestic politics ahead of the election or for some other transactional purpose regarding ongoing trade discussions. This is a dangerous course and should be abandoned immediately.

The episode casts a further shadow over the G7 summit which opens on Friday in the Canadian town of La Malbaie.

But the Trump Administration is not backing down. Having issued temporary waivers when the tariffs were first announced, Trump declined to extend them on Canada, Mexico, and European Union countries on May 31. Officials indicated that the punishment of Canada and Mexico will provide leverage in US efforts to revise the North American Free Trade Agreement.

Trump maintained his attack on the Canadians via Twitter last Friday and on Monday:

Canada has treated our Agricultural business and Farmers very poorly for a very long period of time. Highly restrictive on Trade! They must open their markets and take down their trade barriers! They report a really high surplus on trade with us. Do Timber & Lumber in U.S.?

The Administration’s top economic adviser, Larry Kudlow, tried to play down any division with Canada and other G7 members on Wednesday, “We’re talking everything through. There may be disagreements. I regard this as much like a family quarrel.”

Giuliani: Kim “On Hands and Knees”

Meanwhile, Trump’s attorney Rudy Giuliani contributed to diplomatic efforts on Wednesday with a summary of the on-again, off-again, on-again June 12 summit between Trump and North Korea’s Kim Jong-un in Singapore.

The Trump Administration cancelled the meeting two weeks ago after Pyongyang made clear that it is retaining its nuclear weapons and long-range missiles for now, but within 24 hours Trump was pressing for restoration of the summit. It was confirmed last week when Kim’s envoy, former intelligence head Kim Yong-chol, brought a letter in a giant envelope for Trump to display.

See TrumpWatch, Day 498: Trump — My Summit with Kim is Back On

Speaking at a conference in Tel Aviv, Israel, Giuliani said yesterday that the Trump Administration had successfully backed down North Korea’s firm line:

We said we’re not going to have a summit under those circumstances. Well, Kim Jong Un got back on his hands and knees and begged for it, which is exactly the position you want to put him in.

He defended his remarks in a later interview, “It is pointing out that the President is the stronger figure. And you’re not going to have useful negotiations unless [Kim] accepts that.”

There was no immediate reaction from Pyongyang.

However, North Korea’s declaration two weeks ago was prompted by statements from National Security Advisor John Bolton and Vice President Mike Pence about a “Libyan model” for the talks: a line which — given that Muammar Qaddafi fell from power seven years after giving up his nuclear weapons program in 2004 — could be read as advocacy of regime change as well as an insistence on denuclearization.

A federal judge rules that the Trump Administration cannot cut off grants to Philadelphia over the manner in which the city deals with undocumented immigrants.

The decision could put in jeopardy the Administration’s threat to punish “sanctuary cities” with removal of federal funding.

District Judge Michael Baylson said that the Administration’s conditions are unconstitutional, “arbitrary”, and “capricious”, and that Philadelphia’s policies are reasonable and appropriate.

Philadelphia officials says will turn over immigrants to Immigration and Customs Enforcement only if the agency has a warrant signed by a judge.

The Administration was demanding access by ICE officers to prisons to interview detainees, provision of advanced notice of any releases, and no restrictions on disclosure of a detainee’s immigration status.