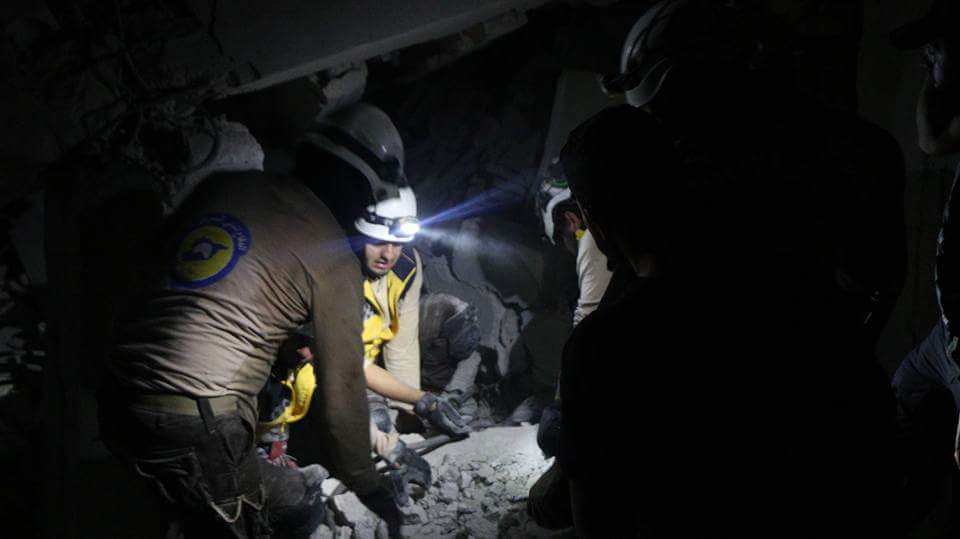 UPDATE, JUNE 9: The toll from Russia’s mass killing on Thursday night has risen to 45, with the discovery of more bodies in the town of Zardana and the deaths of wounded.

For the second day in a row, the #WhiteHelmets teams continue the search and rescue mission for those missing beneath the rubble in the town of #Zardana. Three bodies were recovered today from the wreckage of the destroyed neighborhood bringing the death toll to 47. pic.twitter.com/h7defpROoM

UPDATE 1745 GMT: The warplane carrying out last night’s strikes in Idlib Province was an Su-25 which took off from Russia’s Hmeimim airbase in Latakia Province in western Syria, according to a pro-opposition site.

At least 18 people have been killed and more than 70 wounded by pro-Assad airstrikes on the town of Zardana in Idlib Province in northwest Syria on Thursday night.

Local sources are blaming Russian forces, who are equipped for night attacks, for the mass killing. White Helmets search and rescue operations are continuing.

Residents said people were attacked as they were leaving the evening prayer for the holy month of Ramadan, with a mosque struck amid the eight raids.

White Helmets rescuers are among the casualties, as the pro-Assad warplanes carried out “double tap” strikes, hitting those who gathered to save the wounded after the initial bombing.

Warning! graphic… This on the last ten nights of Ramadan. At least 10 civilians were killed and dozens injured mostly women and children this evening after Russian warplanes bombed civilian neighbourhoods of #Zardana village in North #Idlibhttps://t.co/LXUbyhsYWx pic.twitter.com/HQFFkOF6j6

The opposition has held almost all of Idlib Province since spring 2015. A pro-Assad offensive took a slice of the southeast of the province during the winter, but forces were redeployed for the assault on East Ghouta since Damascus. Since then, Turkish forces have said up a series of observation posts around Idlib and neighboring northern Hama and western Aleppo Provinces to limit the possibility of a further pro-Assad ground attack.

However, despite the Turkish presence, regime and Russian air forces have periodically carried out strikes on civilian areas across the province.

Netanyahu Warns Assad: “Your Regime Is Not Immune from Attack”

Israeli Prime Minister Benjamin Netanyahu, on a tour of European countries, has warned Bashar al-Assad that his regime is not immune from attack, including over Iranian military support for Damascus.

Netanyahu told a London audience on Thursday of “a new calculus” in the conflict:

[He] has to understand that Israel will not tolerate the Iranian military entrenchment in Syria against Israel.

The consequences are not merely to the Iranian forces there but to the Assad regime as well. I think it’s something that he should consider very seriously.

Israel has regularly carried out missile strikes against regime and Iranian positions and personnel, seeking to prevent weapons transfers to Lebanon’s Hezbollah and any Hezbollah and/or Iranian presence in southwest Syria near the Israeli-occupied Golan Heights. In recent months, Israel has escalated the attacks, including strikes across Syria in May killing regime and Iranian personnel.

With the Assad regime threatening an offensive in southern Syria, Israel is negotiating with Russia to ensure no Hezbollah or Iranian-supported foreign militia are involved. Netanyahu has gone farther with public demands that Iranian personnnel withdraw from all of the country.

See An Impending War Between Israel and Iran in Syria?