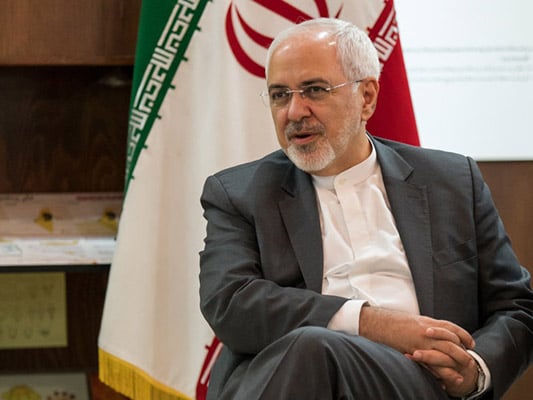 Appealing to international opinion amid the Trump Administration withdrawal from the July 2015 nuclear deal and American sanctions, Iran’s Foreign Minister Mohammad Javad Zarif (pictured) has written a lengthy article proclaiming that the US is now a “rogue state”.

Publishing in Iran Daily and promoting in multiple languages on social media, Zarif framed the opinion piece as a response to the May 8 withdrawal and US Secretary of State Mike Pompeo’s May 21 speech setting 12 preconditions on Iranian policies and behavior.

15 reasons why U.S. policy has gone wrong on Iran, and on the region. A little history lesson for those who've so far proven unwilling to learn from the past:https://t.co/M5ztOz0zxV

The Foreign Minister immediately portrayed the US departure from the nuclear agreement as part of the isolation of the US from the international community. He cited the Trump Administration’s departure from the Paris climate change agreement, the Trans-Pacific Partnership on trade, and the UN Human Rights Council and its threat to leave the North American Free Trade Agreement.

Citing Pompeo’s ignorance of history — “in the past 40 years the Iranian people have heroically resisted and foiled aggressions and pressures by the US” — Zarif asserted:

Contempt for international law and attempts to undermine the rule of law in international relations have been among the main features of the current administration’s foreign policy….The continuation of such policies can endanger the stability of the international community, turning the US into a rogue state and an international outlaw.

Zarif set out Iran’s own list of preconditions for the US to meet. Not only must Washington acknowledge Iran’s independence and national sovereignty and assure Iran that it will end intervention in Iranian domestic affairs, the Trump Administration must also “acknowledge…unwarranted and unlawful actions against the people of Iran over the past decades”.

Policy changes demanded include an end to US support for the “Zionist regime” of Israel; a halt to arms supplies to “regions in crisis”, notably to Saudi Arabia for its military intervention in Yemen; an end to reliance on nuclear weapons; and cessation of actions which supposedly led to the creation of the Islamic State.

Zarif quickly acknowledged that the intent of his article is not to bring a response from the Trump Administration, “I admit that regrettably, it is not realistic to harbor a hope for such a change in US behavior.”

Instead, he turned to the international community with the projection of Iran as the promoter of “inclusion, multilateralism, dialogue, respect for the rule of law, and nuclear disarmament”. Covering up Tehran’s own military interventions, he declared its “serious diplomatic efforts to end regional conflicts in Syria and Yemen”.

Zarif did not refer specifically to Iran’s campaign to counter US sanctions by assuring trade and investment links with other countries, notably in Europe and in Asia. But the mission to preserve Iran’s fragile economy was highlighted at the same time by reports that Iran is inviting Japanese Prime Minister Shinzo Abe to Tehran in mid-July.

The visit would be the first by a Japanese prime minister since 1978.

Iran, which is facing a cut of up to 40% in its oil exports amid the US sanctions,is Japan’s third-largest energy supplier. Trade between the two countries is more than $11 billion per year.

Former Foriegn Minister Kamal Kharrazi, now head of the Strategic Council on Foreign Relations, said on Thursday that Europe must stand up to US “bullying”.

Kharrazi told an Italian newspaper, “The only way to counter the sanctions is to resist US pressure. This is not the issue of helping Iran, but it is related to the European countries and their security.”

The Rouhani Government is making a concentrated effort for European countries to not only maintain trade and investment but also to expand it — despite the Supreme Leader’s scepticism over the effort.

However, amid the Trump Administration’s threat of punishment of foreign firms which do not break links with Iran by November, major European firms have announced suspension of business. They include French car manufacturer PSA; French energy giant Total, which was planning a $4.9 billion investment in the South Pars gas field; France’s Airbus, which had contracted to deliver 100 passenger planes to Tehran; German insurance company Allianz; and leading shipping firm Maersk.

See Iran Daily, June 8: Zarif — “To Save Nuclear Deal, Compensate Us for Our Losses”