What Does the Statue of a Suffragette Mean for UK Politics Today? 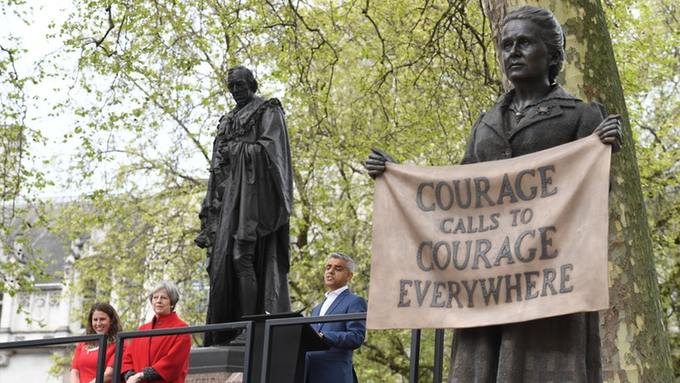 On April 24, a statue of suffragette Millicent Fawcett – who was instrumental in getting the vote for the first women in the UK, those over 30 with property — was unveiled in Parliament Square.

Amidst the commemoration, what does the image of Fawcett and fellow suffragettes mean for UK politics today?

Fawcett, the first woman to be honored with a place in Parliament Square, joins eleven statues of men. Her installation highlights the under-representation of formerly ostracized groups. In earlier centuries, the working classes did not sit for portraits. Today the Improving Parliament Report and Good Parliament Report call for a more balanced representation in the art within the parliamentary precinct, but Fawcett’s commemoration took place in the same week that the dismal findings of the Fawcett Society’s Sex and Power report 2018 were published.

With the statue of Fawcett, we reflect on the representation both of women and of their “interests”. Beneath Millicent Fawcett on the plinth is Mary MacArthur, who founded the National Federation for Women Workers. Leading the Cradley Heath Women Chainmakers in a strike for ten weeks, she was successful in winning a fairer wage in 1910. She also stood, unsuccessfully, as a parliamentary candidate in Stourbridge in 1919.

MacArthur likened women’s organisations to a “bundle of sticks” — female workers are stronger together, whereas one who is isolated can break. She may have been impatient at the Women’s Budget Group analyses, showing that women are more likely to be concentrated than men in lower pay bands; the different qualitative experiences of casualization; the implications for those with dependents; the removal of NHS bursaries for student nurses; low pay for care workers; and unpaid reproductive labor. These dynamics of power mean women’s plans may be easily thwarted if there are sudden dislocations in their daily lives.

More broadly, the statue points towards the symbolic representation of politics in UK culture. Gillian Wearing, commissioned to create the statue, is a chronicler of the everyday. Daily concerns are often in contemporary political issues such as “private” moments in public spaces, not least sexual harassment, and women’s navigation of disproportionate social media trolling.

Wearing joins an excellent group of contemporary female political artists in this portrayal of the everyday. Chloe Cheese’s “The Vote Office”, Shelley Wilson’s “Body Politics”, and Cornelia Parker’s documentation of the 2017 General Election: these broaden our conceptual understanding of art and politics beyond oil paintings, busts, and vellum of battles and very important men, looking towards more democratic notions of heritage.

As with all significant art, the meanings evoked by the Fawcett statue are various. But in all those meanings — 100 years after the first women obtained the right to vote — this is a marker and an occasion to reflect and act on the representation of women in British politics.