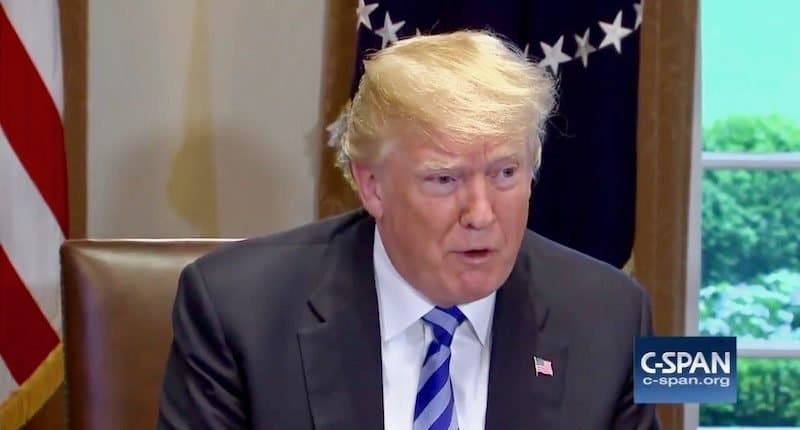 Donald Trump has lashed out at undocumented immigrants as “animals” during a White House meeting.

Trump spoke in front of news cameras on Wednesday, during a round-table discussion with state and local leaders on California’s sanctuary laws, which limit communication between local law enforcement and federal immigration officers.

Trump denounced “the dumbest laws on immigration in the world”, told his administration to “do much better” keeping out undesirable people, and then railed:

We have people coming into the country, or trying to come in — we’re stopping a lot of them. You wouldn’t believe how bad these people are. These aren’t people, these are animals, and we’re taking them out of the country at a level and at a rate that’s never happened before.

Trump said the mayor of Oakland, California should be charged with obstruction of justice for warning her constituents in February of an impending large-scale immigration raid and arrests.

Turning to Attorney General Jeff Sessions, Trump said, “Perhaps the Department of Justice can look into that.”

Trump is lying on immigration, lying about crime and lying about the laws of California. Flying in a dozen Republican politicians to flatter him and praise his reckless policies changes nothing. We, the citizens of the fifth-largest economy in the world, are not impressed.

“We Have to Break Up Families”

Trump used the meeting to push other hard-line positions on immigration, including the separation of children from their parents. Addressing Homeland Security Director Kirstjen Nielsen, he said:

The Justice Department directed earlier this month that border agents take all undocumented immigrants to court, raising the likelihood of family break-ups. Some children are reportedly being housed in military camps.

Officials said Nielsen was on the point of resignation last week, after she was berated by Trump in a Cabinet meeting for not being tough enough on undocumented immigrants and border security.