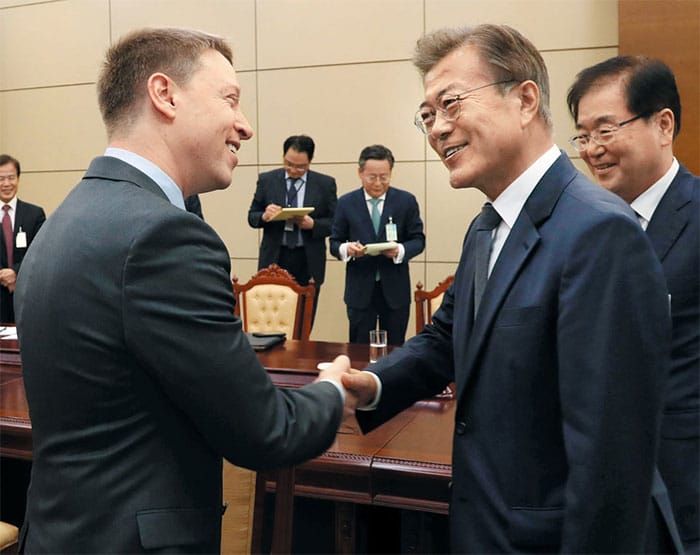 Trying to save his personal encounter with North Korea’s Kim Jong-un, Donald Trump lies on Twitter about a White House briefing.

Trump’s tweet on Saturday was the latest in a series of swiftly-changing declarations after North Korea threw the White House into confusion with two statements. Shifting from its previous conciliation, Pyongyang drew a firm line over its nuclear weapons and missile programs, and pushed back on comments by National Security Advisor John Bolton and Vice President Mike Pence which it saw as advocacy of regime change.

On Thursday, Trump wrote Kim that the summit was postpond. A White House staffer briefed the press that, if the meeting was revived, it could not be convened on the proposed date of June 12 in Singapore: “The ball is in North Korea’s court right now, and there’s really not a lot of time. June 12th is in 10 minutes.”

But on Friday Trump seized upon a measured response by Pyongyang to tell reporters, “It was a very nice statement they put out. We’re talking to them now. They very much want to do it. We’d like to do it. We’ll see what happens.”

He contradicted the “senior White House official” who had held Thursday’s conference call: “It could even be the 12th.”

See TrumpWatch, Day 491: Trump — North Korea Summit May Be Back On Track

Trump woke on Saturday morning to find The New York Times, among others, reporting the difference between the President’s Friday pronouncement and the downbeat comments of the White House staffer a day earlier. Trump vented his fury:

The Failing @nytimes quotes “a senior White House official,” who doesn’t exist, as saying “even if the meeting were reinstated, holding it on June 12 would be impossible, given the lack of time and the amount of planning needed.” WRONG AGAIN! Use real people, not phony sources.

Reporters who were on the conference call reacted with amazement that, even with Trump’s history of brash and misleading statements, the President could try to deny any briefing had taken place:

I mean, every reporter on the call knows who this official was, and this official exists. And we all heard the official say it. https://t.co/iEiTEpHeyb

Imagine being the WH background briefer who led this briefing, who now has his boss – the president of the US – saying he/she doesn’t exist. https://t.co/6tYHxp3ZFK

Then journalist Yashar Ali, who was not present at the “on background” conference call, named the briefer:

The official is Matt Pottinger who serves on the National Security Council. He briefed dozens of reporters on background. https://t.co/5FUP7t8nYQ

Audio of the briefing:

4. I've obtained audio of the WH press briefing. You can hear Raj Shah, Deputy Press Secretary, introduce Pottinger (along with the terms – which are standard) and then Pottinger makes the statement that POTUS says was never made. Lots of reporters in briefing room and on phone. pic.twitter.com/2gEYkRSyTv

Pottinger is a former journalist and Marine who is the leading Asia specialist on the National Security Council. With an Administration which has yet to name an Assistant Secretary of State for East Asia or an Ambassador to South Korea — and whose top Korea advisor left in March — the NSC staffer has taken on an even greater role.

As Trump was erasing Pottinger, Kim and South Korean President Moon Jae-in were meeting in the Korean demilitarized zone.

Moon said in a Sunday morning press conference that Kim expressed a desire to “end a history of war and confrontation”, with a willingness to talk about “denuclearization”.

The South Korean President then tried to establish the conditions for the summit:

Chairman Kim once again clearly expressed his firm commitment to a complete denuclearization of the Korean Peninsula. What is not so clear to him is how firmly he can trust the United States’ commitment to ending hostile relations and providing security guarantees for his government should it denuclearize.

Confirming the statements of White House officials that working-level discussions will continue, Moon said the results of those talks will help determine whether a summit will take place and if it can be successful.