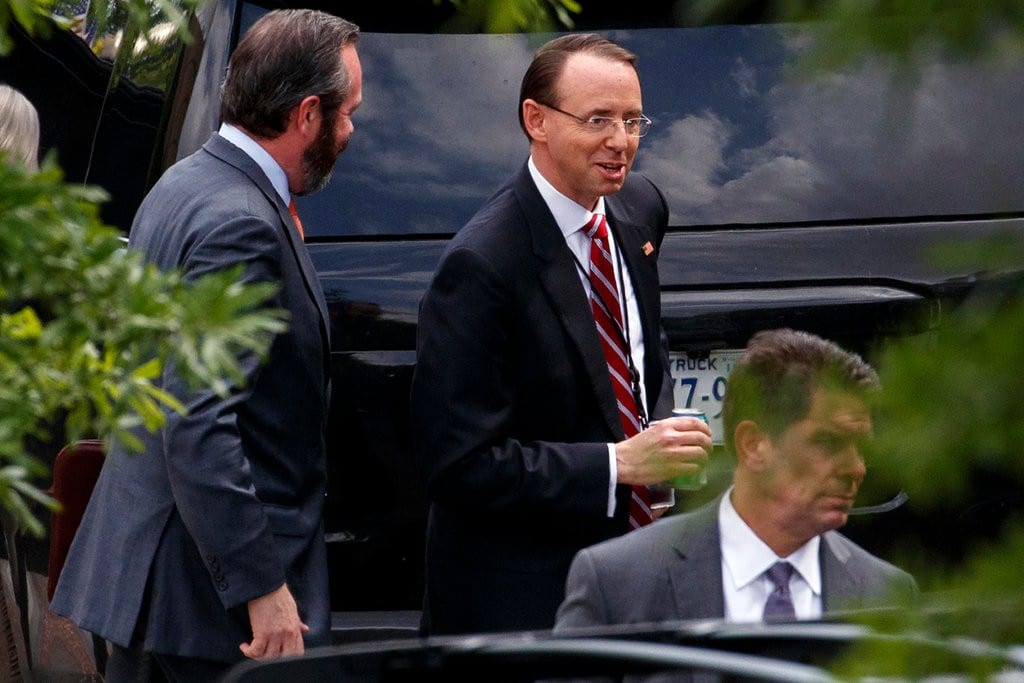 Developments on Day 487 of the Trump Administration:

In its latest attempt to divert the Trump-Russia investigation, the White House pressures the Justice Department to show some highly-classified information to Republican legislators.

Monday’s acceptance by the Department followed weeks of campaigning by Donald Trump and his allies with the unsupported claim that the FBI had a “spy” inside the Trump campaign in 2016.

The allegation was the latest by Trump, his advisors, and supportive media like Fox and Breitbart to undermine the Justice Department and the FBI, while pressing Deputy Attorney General Rod Rosenstein — the only official who can formally dismiss Special Counsel Robert Mueller — to focus on the agencies, 2016 Democratic nominee Hillary Clinton, and the Obama Administration rather than the Trump-Russia inquiry.

House Intelligence Committee chairman Devin Nunes,who has worked with the White House since March 2017 to curb the Russia investigation, threatened to hold Rosenstein in contempt of Congress or to try to impeach him if he did not hand over material.

In fact, the FBI did not have a “spy” but a counter-intelligence agent, UK-based academic Stefan Halper, who met Trump campaign advisors Carter Page and George Papadopoulos and campaign co-chairman Sam Clovis in summer 2016. The FBI has considered Page a possible Russian agent since 2013, and Papadopoulos was in regular contact with Russian-linked academic Joseph Mifsud, including about Moscow’s provision of thousands of e-mails which could damage Clinton. Clovis brought both men into the Trump campaign.

But after Trump’s series of eight tweets on Sunday fuming about a “Witch Hunt” and threatening to order the Justice Department — despite its likely violation of the Constitutional provision of the Department’s independence — to “look into whether or not the FBI/DOJ infiltrated or surveilled the Trump Campaign for Political Purposes”, Rosenstein made the tactical concession of saying the department’s Inspector General would look into the matter.

The Deputy Attorney General then accepted the demand of the White House-linked legislators to see some of the classified information.

Last month, Rosenstein avoided any immediate political and constitutional crisis when Trump threatened the firing of Special Counsel Mueller — and Rosenstein — after the FBI raid on the home, hotel, and office of his personal lawyer Michael Cohen. The official assured Trump that he is not presently a target of the Trump-Russia inquiry.

It was not clear how much information will now be shared, in what form, with whom, and in what venue.

White House Press Secretary Sarah Huckabee Sanders said Kelly would “immediately set up a meeting with the FB, DOJ, and DNI together with congressional leaders to review highly classified and other information they have requested”.

Justice Department officials have argued that disclosure of the information could affect sources and security.

A dozen trees, including cedars and Douglas firs which host the endangered northern spotted owl, were cut down in western Oregon earlier this month.

There is no law against the land clearance by Lone Rock Resources, but the operations were carried out with little to no transparency or public input.

Local residents said the BLM negotiated with Lone Rock without public knowledge and allowed them to build gates to keep the public and journalists out of the area.