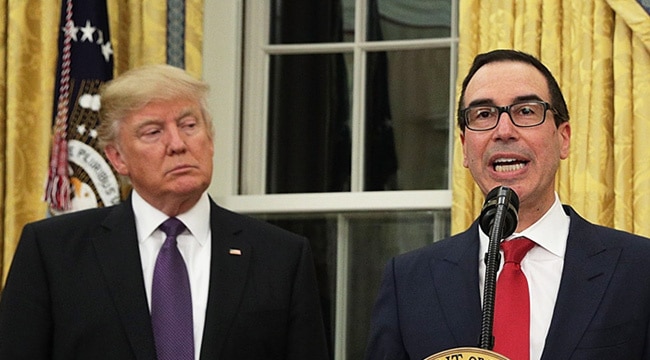 Donald Trump has tried to cover his Administration’s retreat on tariffs against China with deceptive tweets about Beijing buying “practically as much as our Farmers can produce”:

China has agreed to buy massive amounts of ADDITIONAL Farm/Agricultural Products – would be one of the best things to happen to our farmers in many years!

In fact, last week’s meetings with China brought little in a substantive agreement to cover for the Administration’s disarray over the tariffs on $150 billion of Chinese goods, which it announced in a series of orders and statements from late March.

Trump suddenly imposed duties on $60 billion of goods, in part to cover the Administration’s suspension of much of the steel and aluminum tariffs — declared earlier in March — that had affected US allies rather than Beijing. China responded by restrictions on $3 billion of US products, bringing the Administration’s threatened measures against $90 billion more in Chinese imports.

After three days of talks with the visiting Chinese delegation, led by Vice Premier Liu He, Treasury Secretary Steven Mnuchin said on Sunday that the tariffs are “on hold”.

But later in the day, US Trade Representative Robert Lighthizer warned the Chinese that the restrictions might still be imposed.

Meanwhile, Trump’s chief economic adviser Larry Kudlow stepped back from his declaration on Friday that China offered to reduce its trade surplus with the US by $200 billion. Yesterday he said that the number is merely a “rough ballpark estimate,” and that the two countries never expected to reach an agreement.

Commerce Secretary Wilbur Ross will travel to China in coming days to try to reach an accord.

However, officials said China had effectively countered the Administration by taking advantage of divisions between Trump’s advisors.

During a trip to China earlier this month, Mnuchin — seen as a free trader along with Kudlow — and protectionist Peter Navarro engaged in a shouting match after the Treasury Secretary agreed to a private meeting with Liu He.

Navarro was reportedly sidelined during the three-day talks in Washington last week.

Officials said that, after the discussions, the Chinese seemed bewildered by the state of the talks. The delegation summaraized that even if they were able to secure concessions from Mnuchin, they were not sure those promises would ultimately hold.

Meanwhile, there was no commitment to a specific figure — $200 billion or “practically” all US agricultural output — in shifting trade.