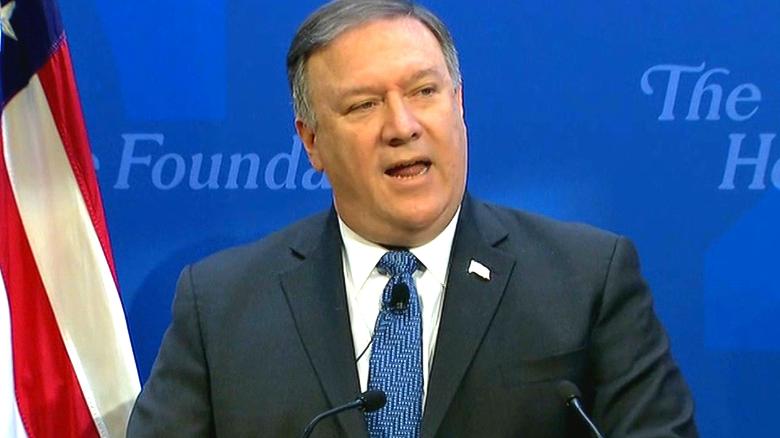 UPDATE 1530 GMT: British Petroleum has suspended a joint project with the National Iranian Oil Company because of the threat of US sanctions.

BP co-owns the Rhum gas field in the North Sea, about 240 miles northeast of Aberdeen, Scotland, although its stake is in the process of being sold to Serica Energy.

A fresh well was due to be drilled, but BP says the work is now on hold.

Both BP and Serica said they remained committed to the deal, due to be completed in the second half of 2018.

US Secretary of State Mike Pompeo (pictured) has pledged that the Trump Administration will crush Iran and its allies with wide-ranging sanctions, unless Tehran ends its activities in the Middle East.

Justifying the Administration’s withdrawal from the July 2015 nuclear deal two weeks ago, Pompeo announced in a speech at the Heritage Foundation on Monday:

No more wealth creation for Iranian kleptocrats. No more acceptance of missiles landing in Riyadh and in the Golan Heights. No more cost-free expansions of Iranian power….

We will track down Iranian operatives and their Hezbollah proxies operating around the world and we will crush them. Iran will never again have carte blanche to dominate the Middle East.

Pompeo effectively ruled out any negotiation of a new agreement, even if Iran accepted revision of the Joint Comprehensive Plan of Action. He not only assailed “weak” provisions such as 10- to 15-year limits on enrichment of uranium — although Tehran made a permanent pledge not to pursue a nuclear weapon — but insisted that the Islamic Republic “entered into the JCPOA in bad faith”.

However, much of the Secretary of State’s rhetoric was beyond the deal, characterizing Iran as a destructive force throughout the region.

The government spent its newfound treasure fueling proxy wars across the Middle East and lining the pockets of the Islamic Revolutionary Guard Corps, Hezbollah, Hamas, and the Houthis [in Yemen].

Remember: Iran advanced its march across the Middle East during the JCPOA….

It is clear that the JCPOA has not ended Iran’s nuclear ambitions, nor did it deter its quest for a regional hegemony.

Pompeo then set out what amounted to a US declaration of economic war on Iran, based on the sanctions that command not only American firms but foreign companies and banks to cut links with Tehran.

The Iranian regime should know that this is just the beginning.

This sting of sanctions will be painful if the regime does not change its course from the unacceptable and unproductive path it has chosen to one that rejoins the League of Nations. These will indeed end up being the strongest sanctions in history when we are complete….

After our sanctions come in force, it will be battling to keep its economy alive. Iran will be forced to make a choice: either fight to keep its economy off life support at home or keep squandering precious wealth on fights abroad. It will not have the resources to do both.

The Secretary of State cited signs of economic crisis across Iran, including strikes over unpaid wages, a surging youth unemployment, environmental problems, and corruption. He pointed to opportunity through nationwide protests in January: “The Iranian regime is going to ultimately have to look itself in the mirror. The Iranian people, especially its youth, are increasingly eager for economic, political, and social change.”

An Alternative to Economic War?

As an alternative to the US economic offensive, Pompeo set out a series of demands over both Iran’s nuclear program and its regional approach.

The Secretary of State said Iran must curb its civilian nuclear program by shutting down a new heavy water reactor, suspend any launches of ballistic missiles, and open up all facilities — i.e., including military sites — to international inspection.

Across the region, Pompeo said Iran must cut long-standing ties with Hezbollah, Hamas, and Palestine’s Islamic Jihad. Tehran will have to accept the disbanding of Shia militias in Iraq, end support for the Houthi insurgency in Yemen, and withdraw all Iranian and Iranian-led forces from Syria.

And too, Iran must end its threatening behavior against its neighbors – many of whom are U.S. allies. This certainly includes its threats to destroy Israel, and its firing of missiles into Saudi Arabia and the United Arab Emirates. It also includes threats to international shipping and destructive – and destructive cyberattacks.

Inside Iran, the regime must release dual-national prisoners, the Secretary of State said.

The European Union and its members — which supported amendment of the JCPOA and a separate agreement on Iran’s ballistic missiles — are firmly opposed to the US withdrawal from the nuclear deal and the threat of expansive sanctions. Last week the EU announced blocking measures to protect small- and medium-sized firms from American punishment.

From my conversations with European friends, I know that they broadly share these same views of what the Iranian regime must do to gain acceptance in the international community. I ask that America’s allies join us in calling for the Iranian Government to act more responsibly.

But if the Secretary of State genuinely envisaged European acceptance, his hope was quickly rebuffed. The EU’s foreign policy head, Federica Mogherini, said in a statement:

Secretary Pompeo’s speech has not demonstrated how walking away from the JCPOA has made or will make the region safer from the threat of nuclear proliferation or how it puts us in a better position to influence Iran’s conduct in areas outside the scope of JCPOA.

The prospect of a new jumbo Iran treaty is going to be very, very difficult. I think if you try now to fold all those issues – the ballistic missiles, Iran’s misbehaviour, Iran’s disruptive activity in the region and the nuclear question – if you try to fold all those in to a giant negotiation, a new jumbo Iran negotiation, a new treaty – that’s what seems to be envisaged – I don’t see that being very easy to achieve, in anything like a reasonable timetable.

He went further in denouncing the Trump Administration’s departure from the nuclear deal: “The advantage of the JCPOA was that it had a very clear objective. It protected the world from an Iranian nuclear bomb, and in return it gave the Iranians some recognizable economic benefits.”

Rouhani: “Who Are You to Decide?”

Who are you to decide for Iran and the world?…

All world countries want independence in their decisions and perhaps Americans are able to advance their agenda in some places through pressure, but logic does not accept them making decisions for the world.

Rouhani, who has been pursuing confirmation and expansion of European links to preserve the nuclear deal — and Iran’s economy — sought the diplomatic high ground: “Today, we must help each other more”. He said American policy had regressed to 2003, repeating the mistake of the Iraq War.

US diplomacy sham is merely a regression to old habits: imprisoned by delusions & failed policies—dictated by corrupt Special Interest—it repeats the same wrong choices and will thus reap the same ill rewards. Iran, meanwhile, is working with partners for post-US JCPOA solutions.