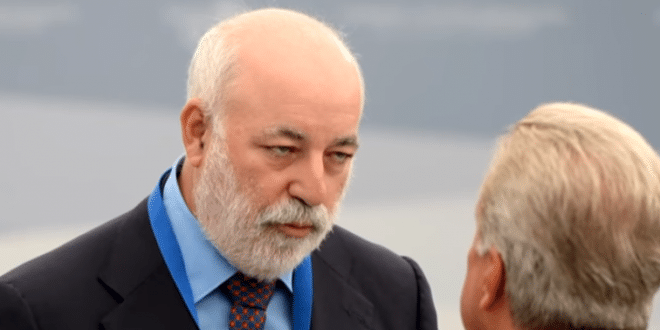 Special Counsel Robert Mueller’s team has questioned Russian tycoon Viktor Vekselberg (pictured) about his payment of $500,000 to Donald Trump’s personal attorney Michael Cohen, after the 2016 Presidential election, according to “a source familiar with the matter”.

Vekselberg, chairman of asset manager Renova Group, is close to Russian President Vladimir Putin. Last month the Trump Administration placed him on a list of sanctioned Russians for activities including interference in the election. Earlier this year he was stopped by the FBI when his private jets landed in New York-area airports as part of Mueller’s investigation.

The purpose of the payments and the nature of the business relationship between Vekselberg and Cohen is unclear.

The FBI carried out a “no-knock” raid on Cohen’s home, office, and hotel on April 9, in an investigation of the attorney’s business deals which is being pursued by federal prosecutors in New York, acting in part on a referral from Mueller’s office.

Investigators also asked Vekselberg about $300,000 in donations that the head of his US affiliate, Columbus Nova, made to Trump’s campaign and inaugural funds.

The attorney for Stormy Daniels — who received $130,000 from Cohen in October 2016 to keep quiet about a sexual encounter with Trump 10 years earlier — later produced information that added details about the Vekselberg payments.

Michael Avenatti said the money went into the bank account for Essential Consultants, a shell company set up by Cohen to pay Daniels, from January to August 2017. Documents appear to confirm the claim.

Vekselberg built his fortune through a series of deals in the oil and gas sector after the fall of the Soviet Union in 1991. In 2010, he was appointed by Russian President Dmitry Medvedev to lead the Skolkovo Innovation Center project, the Russian counterpart of Silicon Valley.

Vekselberg also has ties to Oleg Deripaska, the Russian businessman linked with former Trump campaign chairman Paul Manafort, now indicted on fraud, and money laundering charges. The tycoon’s company acquired a large stake in the Bank of Cyprus — a favored repository of Russian money — at the same time that Wilbur Ross, now Commerce Secretary, made a capital infusion and became vice chairman.

Columbus Nova is a management company solely owned and controlled by Americans. After the inauguration, the firm hired Michael Cohen as a business consultant regarding potential sources of capital and potential investments in real estate and other ventures.

The Swiss pharmaceuticals company Novartis also said it had been contacted by Mueller’s team in November 2017, over almost $400,000 in payments from February 2017 to February 2018 to Cohen’s shell company Essential Consultants. Novartis said the contract was related to “US healthcare policy matters”.

The US telecom and media giant AT&T confirmed on Wednesday that it had paid Cohen to “provide insights into understanding the new administration”. Korea Aerospace Industries (KAI), one of the biggest defence companies in South Korea, said it had paid Cohen. Documents indicated the sum given to Essential Consultants was $150,000 in November 2017

A spokesman for the company said it contracted Cohen for “legal consulting concerning accounting standards”. KAI is currently competing for a US Defense Department tender for 350 trainer jets, in partnership with the US contractor Lockheed Martin.