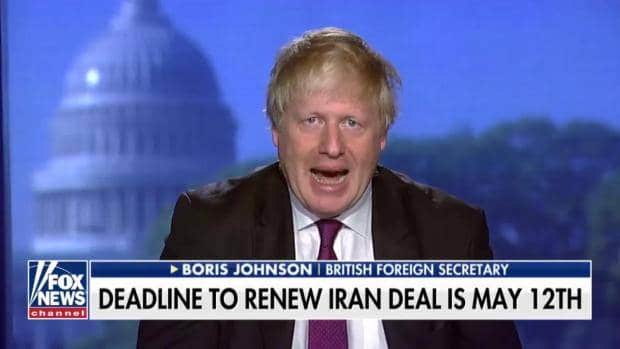 UPDATE 1545 GMT: I chatted with Monocle 24’s The Briefing at noon on the Iran deal and what happens if Donald Trump imposes sweeping US sanctions:

With Donald Trump about to announce his decision over the future of US sanctions and the Iran nuclear deal, I joined BBC Radio London on Tuesday morning to discuss the last-ditch effort by UK Foreign Secretary Boris Johnson to hold back the President.

The chat with Petrie Hosken begins with the “new diplomacy” of reaching Trump through TV, with Johnson appearing on the President’s favorite program Fox and Friends as well as talking to Administration officials. It then assesses whether there is any chance of pulling Trump — through flattery — back to the European position of maintaining the deal, while negotiating a separate agreement on Iran’s ballistic missile program.

Beyond that longshot, we also consider UK domestic politics — why didn’t Prime Minister Theresa May make this visit, following French President Emmanuel Macron and German Chancellor Angela Merkel to Washington? And is Johnson on a no-lose mission, if he is seeking publicity in a quest to replace May?

There’s a postscript about Trump and the Korean talks, pointing how North Korea’s clever moves in using Trump to break out of their isolation in East Asia.