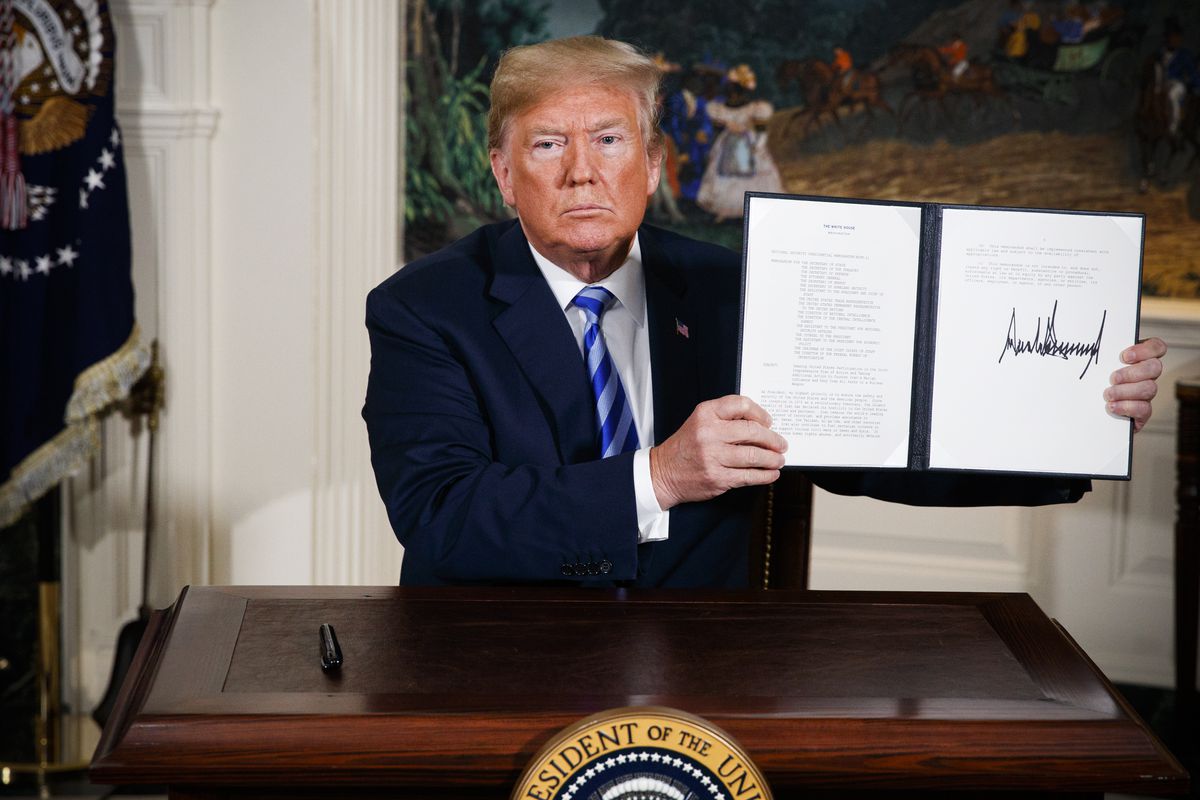 UPDATE 1900 GMT: Iranian Foreign Minister Mohammad Javad Zarif has spoken with British and French counterparts, and President Hassan Rouhani has been on the phone with French President Emmanuel Macron:

According to Rouhani’s office, the President told Macron that Europe has a very limited time to save the nuclear agreement and “must determine and announce its clear, firm stances on its obligations” — thus backing the line set by the Supreme Leader, who earlier said the Islamic Republic can only proceed with European guarantees.

UPDATE 1515 GMT: The new US Ambassador to Germany, Richard Grenfell, warns his hosts — and gets some advice from German diplomat Wolfgang Ischinger in response: 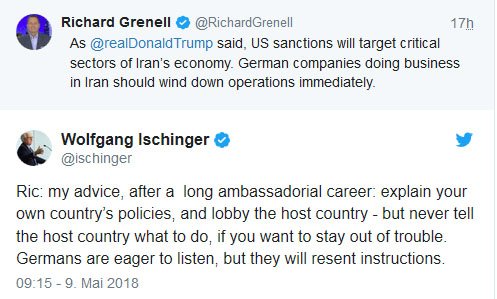 UPDATE 1230 GMT: The National Iranian Oil Company has pointed to the importance of the $4.9 billion gas deal with France’s Total as a marker of the European response to the US withdrawal from the nuclear deal.

The NIOC said that if Total withdraws from the project in the South Pars gas field, the largest in the world, its stake will be consigned to the Chinese and development will continue.

Total signed the memorandum with Tehran last July but its executives have said implementation is delayed until there was clarity about the future of US sanctions.

Despite the delay, Total has reportedly put $90 million into the project, an investment which would be taken over by Chinese firms.

Iran is seeking $20 billion per year for oil and gas projects, 80% to be provided by foreign entities.

Last night you heard that the US President made silly and superficial remarks. There were maybe more than 10 lies in his comments. He threatened both the establishment and the nation, saying he will do this and that.

Mr. Trump, I tell you on behalf of the Iranian nation: You are making a damn mistake.

Khamenei ruled out any re-negotiation of the nuclear deal or separate talks on Iran’s ballistic missile program — options already cast aside by the Trump Administration:

We accepted the JCPOA [nuclear deal], but enmities with the Islamic Republic did not end. Now they raise the issue of our presence in the region and the issue of missiles. If we accept them too, they will bring up another issue.

The reason for US opposition to the establishment is that the US used to completely dominate [Iran] but the Revolution cut off their hands.

He said the US was already looking for compliant regimes, but failing to establish this:

You spent money to dominate Iraq and Syria; well you couldn’t, damn it to hell!….

This behavior existed in the era of former Presidents in different forms. The Iranian nation has stood firmly and those ex-presidents have died and their bones are rotten but the Islamic Republic is still there.

But most significant in the Supreme Leader’s address was an apparent warning to the Rouhani Government’s over its effort to maintain the deal, with the political and economic involvement of European signatories.

I don't trust these three EU countries either. If the govt. wants to make a contract, they should ask for a guarantee, or else they will all do just as the U.S. did. If there's not definite guarantee, the #JCPOA cannot continue. pic.twitter.com/UEl86lpcwT

The rial was already at a historic low against the dollar, having fallen 40% in recent weeks amid economic problems and fears about the future of the nuclear agreement.

The Government had tried — but failed — to unify the official and free-market rates at 42,000:1. Other measures such as raising interest on savings and arresting unofficial currency dealers also did not check the slide.

Donald Trump announced on Tuesday that he is withdrawing the US from the July 2015 nuclear deal between Iran and the 5+1 Powers (US, UK, France, China, Russia, and Germany).

The agreement has contained Iran’s nuclear program, with the Islamic Republic giving up its stock of 20% enriched uranium and halting production, sharply limiting its research and development of new nuclear centrifuges, dismantling the core of a reactor that could have produced plutonium, agreeing to extensive inspections by the International Atomic Energy Agency, and making a permanent pledge to not pursue a nuclear weapon.

But Trump — seeking to undo any legacy by his predecessor Barack Obama and choosing advisors who have sought regime change in Iran, over those who saw value in the agreement — said he would not renew the waiver of sweeping Congressional sanctions.

He went even farther by pointing to new American restrictions, seeking not only to cut off any US transactions but to punish foreign companies — particularly those from Europe — who do not end trade and investment projects with Tehran.

Iranian President Hassan Rouhani responded by repeating his Monday statement that the Islamic Republic will remain in the Joint Comprehensive Plan of Action as long as other countries — a reference to the UK, Germany, and France — do so.

Rouhani’s line presented the choice for the three countries and the European Union in stark terms: not only political adherence to the agreement but also support of the banks and companies whose links are essential to Iran’s economic recovery.

UK Prime Minister Theresa May, French President Emmanuel Macron, and German Chancellor Angela Merkel issued a statement regretting Trump’s decision and pledging to continue the JCPOA. However, they offered no clue on the level of backing they will give their firms who are threatened by US sanctions.

Trump presented his decision as fulfilment of a campaign promise, while repeatedly misrepresenting — and even making false statements — about Iran’s nuclear program. He started his presentation by accusing Tehran of further crimes, including support of terrorism and fueling of conflict across the Middle East.

This was a horrible one-sided deal that should have never, ever been made. It didn’t bring calm, it didn’t bring peace, and it never will.

He claimed that the US’s unilateral departure from an international deal would encourage North Korea to complete an international agreement over its own nuclear program, which includes weapons and long-range missile capability: “Hopefully, a deal will happen, and with the help of China, South Korea, and Japan, a future of great prosperity and security can be achieved for everyone.”

Trump did not further explain this logic. He also did not explain how his Administration will work with Europeans to put further pressure on Iran.

Trump said there is no path to war with Iran, but a “senior administration official” acknowledged that there is “no Plan B” for relations with Tehran.

Sr. European diplomat, on dealing with State Dept today re Iran: “All is a shambles there. Total incoherence between State and NSC. Plus, no one has any clue on the day after. There is no strategy.”

The 6-Month Timetable for Sanctions

The US Treasury later announced the timing of the imposition of sanctions over the next six months.

After 90 days, restrictions will be in place restricting all financial transactions with Iran; trade in steel, other metals, and software for industrial processes; involvement in automobile production; imports such as carpets and agricultural products; and export of aircraft and parts — effectively killing a deal by Boeing to provide 90 planes to Tehran, one of the high-profile business outcomes of the nuclear deal.

After 180 days, sanctions on ports and shipping, oil and gas, and insurance will be imposed. Foreign companies who have US links and foreign banks will be required to break all ties with Tehran.

With the expansive approach to the economic punishment, Trump went even farther than his new Secretary of State Mike Pompeo, widely regarded as an Iran hawk.

On Friday, Pompeo called his counterparts in the UK, France, and Germany to confirm Trump’s plan to withdraw. However, the Secretary of State said he was seeking a two-week reprieve for the US and Europe to continue negotiating, including over a revision of the deal’s clauses and a separate negotiation over Iran’s ballistic missile program. Pompeo favored “soft withdrawal”, holding off on reimposing some sanctions.

On Saturday, the State Department’s chief negotiator, Brian Hook, consulted with European diplomats over the sunset provision, under which the restrictions on Iran’s ability to produce nuclear fuel for civilian use expire after 15 years. The Europeans had already agreed to reimpose sanctions if there were a determination that the Iranians were within 12 months of producing a nuclear weapon.

But officials said this did not satisfy Trump.