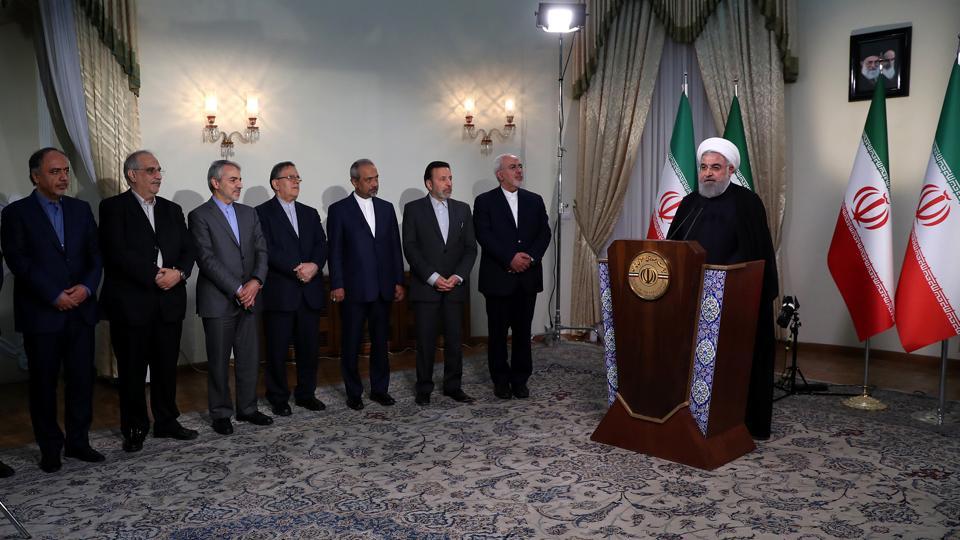 “If the Iran nuclear deal collapses, there will be instability everywhere”

Iran’s reaction to U.S. President Donald Trump’s decision to quit the Iran nuclear deal has been swift and vocal. Iranian officials have issued condemnations, and lawmakers have burned an American flag and cried “Death to America!” in parliament.

But once the knee-jerk reactions are over, the Islamic republic has a difficult choice to make. Should it entirely walk away from its 2015 agreement with world powers; continue to comply with the deal and try to make it work with the rest of the countries that signed on; or should it enter negotiations with the United States and others on a new deal?

The stakes are high following Trump’s withdrawal from the agreement, in which Iran had agreed with world powers — UN Security Council members the United States, Russia, China, France, Britain, plus Germany and the European Union –– to curb its nuclear activities in exchange for sanctions relief.

And there are many factors in play both at home and abroad, including an emboldened camp of hard-line conservatives in Iran who never liked the deal, the possible escalation of Middle East conflicts in which Iran is involved, and an emerging standoff between the United States and European allies that support the deal.

Here are a handful of options that Iran could consider:

Stick To The Deal…

Iranian President Hassan Rouhani said Tehran would remain committed to the 2015 deal if the other signatories to the agreement -=- Russia, China, France, Britain, Germany, and the EU — continue to abide by the pact. Iranian Supreme Leader Ayatollah Ali Khamenei, who has final say on all state matters, said Iran would only uphold the deal with “solid” European guarantees.

Parliament speaker Ali Larijani said Europe had caved to US pressure before but said it was worth preserving the nuclear deal for “a few weeks so that it’s clear to the world that Iran has tried all the avenues to a peaceful political resolution.”

The European Union said it would adhere to the deal and would ensure sanctions on Iran remain lifted as long as Tehran continues to meet its commitments. Russia and China have also said they will remain in the deal.

Scott Lucas, an Iran specialist at the University of Birmingham in Britain and editor of the EA WorldView website, says Iran will remain in the nuclear deal in the short-term to retain its political and economic benefits.

“Iran’s thinking is if European powers continue to trade with us, invest, and help us in terms of economic recovery, then we adhere to the deal,” says Scott. “If the Europeans cut themselves off economically, then the deal collapses.”

…If the Deal Can Stick

While Washington’s European allies have said they will stay in the agreement, analysts say it is not clear how that will be possible in the face of the economic sanctions that Trump has vowed to reimpose on Iran. Although it is unclear precisely which sanctions dropped under the 2015 deal will be reintroduced, it can be assumed that their resumption will affect companies around the world that do business with Iran.

According to the U.S. Treasury, sanctions related to Iran’s energy, auto, and financial sectors will be reimposed in three and six months. That would make it difficult for European firms to do business in Iran without risking huge U.S. fines.

French oil company Total has been the most aggressive Western oil company to move back into Iran, signing in July a $5 billion, 20-year agreement with Iran. Energy giant Royal Dutch Shell has also signed a lucrative deal with Tehran. Meanwhile, Franco-German aircraft manufacturer Airbus has delivered just a few of the 100 aircraft it has agreed to deliver to Iran, in a deal worth billions.

The EU ambassador to the United States, David O’Sullivan, has said in the past that European firms could adopt a “blocking regulation”, which has been used in the past to allow EU entities to get around US sanctions on Cuba. It could also press for non-US courts to decide any legal conflicts.

US sanctions would be a huge blow for Iran, making it difficult for Tehran to sell its oil abroad or use the international banking system.

Iran is the third-largest member of the Organization of the Petroleum Exporting Countries (OPEC) and pumps about 3.8 million barrels per day of crude, or just under 4 percent of global supply. China, India, Japan, and South Korea buy most of its oil exports.

Iran could raise the stakes and choose to revive its nuclear program, the source of fears that the country was secretly trying to develop a nuclear weapon, which led to UN sanctions and negotiations with world powers in the first place.

Iranian officials, who have consistently said its nuclear program was only for civilian purposes, have suggested that Iran could resume uranium enrichment if the deal’s economic benefits are negated.

Analysts say Trump’s pullout could see Iran’s hard-liner conservatives, who have been pressing for a decisive response, seize on a chance to consolidate their power over moderates and reformists like Rouhani who have championed the deal.

Mohammad Ali Jafari, commander of the Iran’s powerful Islamic Revolutionary Guards Corps (IRGC), on May 8 “congratulated” the nation on the “vicious withdrawal of the U.S.” from the deal, “which was not credible even before the withdrawal. It was proved once more that U.S. isn’t trustworthy in regards its commitments.”

Saeed Kamali Dehghan, the Iran correspondent for Britain’s The Guardian, wrote in an editorial that Trump’s decision would have “terrible consequences.” “It would destroy the moderates and reformists in Iran for the foreseeable future. Rohani has already been under intense pressure from his opponents. The failure of the deal will only embolden hard-liners,” he wrote.

Trump said the existing nuclear deal has “terrible flaws” that do not address the threat of Iran’s ballistic-missile program or its “adventurism” behavior in the Middle East, and that the expiration dates for some of the restrictions on Tehran’s nuclear program left the door open for an Iranian nuclear bomb down the road.

“If we do nothing, we know exactly what will happen,” Trump tweeted on May 8. “In just a short period of time, the world’s leading state sponsor of terror will be on the cusp of acquiring the world’s most dangerous weapons.”

Trump said after his announcement on May 8 that Iranians would someday “want to make a new and lasting deal” and that “when they do, I am ready, willing and able”.

Secretary of State Mike Pompeo, too, left the door open on Washington working with its European allies to build a new agreement.

“It is possible given the dire economic situation in Iran for them to come back to the table in due course, but it may be some time,” says Ali Ansari, a professor of Iranian history at the University of St. Andrews in Scotland.

But others say the possibility that Iran would negotiate a new deal is slim, with Trump’s decision burning virtually all bridges with Tehran.

Lucas warns that if the nuclear deal collapses, “there would be instability everywhere”, raising the threat of Iranian retaliation against Israel or the US, escalating regional conflicts in Syria and Yemen, and political infighting in Iran.