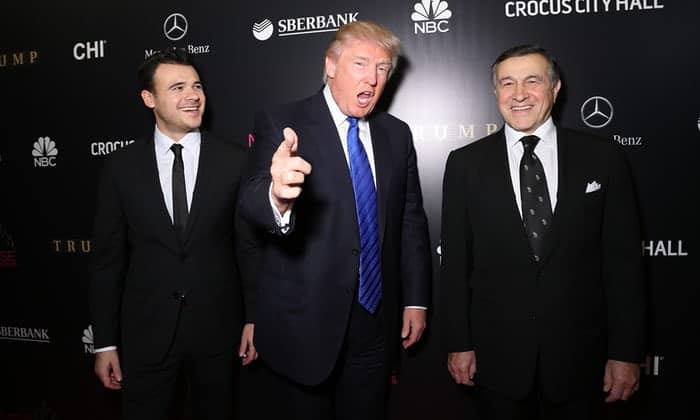 Trump called for imprisonment of journalists to stop leaks

Developments on Day 455 of the Trump Administration:

Trump on Flynn Amid Russia Inquiry: “This Guy Has Serious Judgement Issues”

Soon after his inauguration, Donald Trump was concerned about Russian links — from the judgment of his National Security Advisor Michael Flynn to the claims in an intelligence dossier that Trump partied with prostitutes in a Moscow hotel room in 2013.

The revelations are in a series of memos compiled by FBI Director James Comey, fired in May 2017 by Trump over the Russia investigation, that were released in part on Thursday by the Justice Department.

The documents offer more detail on Trump’s conversation with Comey, while largely corroborating statements by the former FBI Director to Congress and in his memoir published on Tuesday.

At a one-on-one dinner on January 28, 2017, Trump asked for Comey’s pledge of loyalty: “He needed [it] and expected [it].” The FBI Director wrote that he did not reply.

Later, Trump told Comey of his anger at Flynn for not promptly scheduling a return phone call of congratulations from a foreign head of state: “{He] pointed his fingers at his head and said, ‘The guy has serious judgment issues.”

Ironically, it was reported at the time that Trump’s irritation was over the delay of a call with Russian President Vladimir Putin.

The conversation came 48 hours after Acting Attorney General Sally Yates told the White House of concerns that Flynn might be vulnerable to Moscow’s blackmail. Yates was worried about the advisor’s December 2016 conversations — later revealed to have been with guidance from Trump transition staff — with Russian Ambassador Sergey Kislyak, including about the limitation and/or removal of US sanctions that had just been imposed by President Barack Obama.

Yates was fired by Trump days later, purportedly over her questioning of the Administration’s legal position on its “Muslim Ban” blocking the entry into the US of citizens from six mainly-Muslim states.

On February 14, hours after Flynn’s forced resignation, Trump showed further worry about leaks from the White House, including transcripts of phone conversations with the leaders of Mexico and Australia that showed the President as erratic and temperamental: “He [said] that we need to go after the reporters, and referred to the fact that 10 or 15 years ago we put them in jail to find out what they know, and it worked.”

Despite Comey’s warning that “going after reporters was tricky for legal reasons”, Trump directed the FBI Director to talk to Attorney General Jeff Sessions “and see what we can do about being more aggressive”.

After dismissing other staff from the room Trump said to Comey — in a statement that could lead to obstruction of justice charges in the Russia investigation — “I hope you can see your way clear to letting this go, to letting Flynn go. He is a good guy. I hope you can let this go.”

In salacious exchanges in January and February, Trump discussed the “Steele Dossier”, a collection of 17 memoranda from former British intelligence officer Christopher Steele, based on his extensive high-level contacts in Russia. His immediate concern? A claim from multiple sources that Trump had partied with prostitutes in a Moscow hotel in 2013, when Trump was in the city for the Miss Universe Pageant that his organization oversaw.

One of the most striking passages summarized:

Trump’s unorthodox behavior in Russia over the years had provided the authorities there with enough embarrassing material on the now Republican presidential candidate to be able to blackmail him if they so wished….

One which had borne fruit for them was to exploit personal obsesslons and sexual perversion in order to obtain
suitable “kompromat” [compromising material] on him. According to Source D, where s/he had been present, (perverted) conduct in Moscow included hiring the presidential suite of the Ritz Carlton Hotel, where he knew President and OBAMA (whom he hated) had stayed on one ottherr orhcial trips to Russia, and defiling the bed where they had slept by employing a number of prostitutes to perform a “golden showers” (urination) show in front of him. The hotel was known to be under FSB [Russian intelligence] control with microphones and concealed cameras in all the main rooms to record anything they wanted to.

The Moscow Ritz Carlton episode involving TRUMP reported above was confirmed by Source E…who said that s/he and several of the staff were aware ofit att time and subsequently. S/he believed it had happened in 2013.

Immediately after the release of the Steele memos, he described them as “garbage” in a heated press conference just before his inauguration. His long-time bodyguard Keith Schiller said last November that a “Russian participant” in the pageant’s organization had offered to “send five women” to Trump’s hotel room, but that the offer was seen as a joke.

On January 6 — five days before the memos were published by BuzzFeed and summarized by other news organizations — Comey used his first meeting with Trump to tell the incoming President of the dossier. Trump’s initial reaction was “There were no prostitutes; there were never prostitutes.” He said that he did not need to “go there”.

Trump then spoke to Comey about the “all the women who had falsely accused him of grabbing or touching them”. The FBI Director wrote in his summary, “[He] gave me the sense that he was defending himself to me.”

At the January 28 dinner, Trump returned to the “golden shower things”, repeating his comments from earlier meetings. He pondered if Comey should investigate the matter to “prove it was a lie”.

And in a February 8 conversation with Comey, also attended by Chief of Staff Reince Priebus, Trump brought up the “Golden Showers thing”: “It really bothered him if his wife had any doubt about it.” Trump then said that President Putin had told him, “We have some of the most beautiful hookers in the world.”

James Comey Memos just out and show clearly that there was NO COLLUSION and NO OBSTRUCTION. Also, he leaked classified information. WOW! Will the Witch Hunt continue?

A carefully-worded statement by Deputy Attorney General Rod Rosenstein to Donald Trump staves off Trump’s threat to fire both Rosenstein and Special Counsel Robert Mueller in the Trump-Russia investigation.

According to “several people familiar with the matter”, Rosenstein told Trump on April 12 that he is not a target of any part of Mueller’s investigation or the inquiry into Trump’s longtime lawyer Michael Cohen, whose office and hotel were raided by the FBI with a “no-knock” warrant earlier this month.

After the meeting, set up to ease Trump’s fears about the investigation — and implicitly to deal with his threats to curb it with dismissals — Trump told close advisors that it is not the right time to remove Rosenstein or Mueller, according to the sources.

But an “official with knowledge of the unfolding investigation” noted that Rosenstein was only referring to Trump’s official status at the moment. The official said Mueller has not ruled out Trump as a target in the future.

Former FBI Director James Comey said a target is someone about whom an investigation and a grand jury “developed significant evidence — evidence sufficient to charge”.

They’ve been saying I’m going to get rid of them for the last three months, four months, five months. And they’re still here. We want to get the investigation over with, done with, put it behind us. And we have to get back to business.