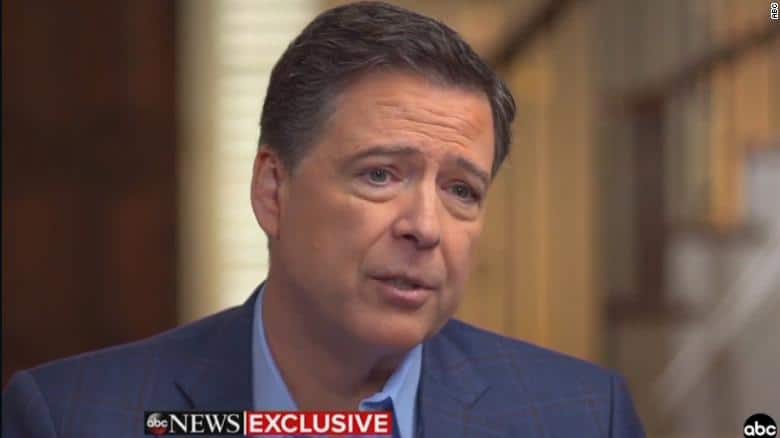 Former FBI Director: Trump may be compromised by Russia

Developments on Day 451 of the Trump Administration:

In a detailed TV interview, former FBI Director James Comey assails Donald Trump as an immoral man, comparable to a Mafia boss, who is a serial liar that treats women like “meat” and stains the White House.

Many of the points in Comey’s conversation, before the release of his memoir on Tuesday, were already known. However, the 55-minute broadcast — part of a five-hour discussion — brought together all his criticisms of Trump, who fired him in May 2017 in a failed effort to halt the Trump-Russia investigation.

Comey endorsed the plausibility of claims that the President could be compromised by the Kremlin, because of Trump’s alleged involvement with prostitutes in a Moscow hotel. He did so by detailing Trump’s impromptu, lengthy defense against the reports, initially made in a 2016 dossier compiled by a former British intelligence officer, and the President’s demand for loyalty.

Reviewing the Russia affair, Trump’s claimed sexual aggression against women, the “lies”, and Trump’s approach to leadership, Comey summarized: “Our President must embody respect and adhere to the values that are at the core of this country. The most important being truth. This President is not able to do that. He is morally unfit to be President.”

In a further charge of Trump’s negligence over Russia, if not complicity with Moscow, Comey described a briefing by intelligence officials of the President-elect about the Russian threat — including intervention in the 2016 election.

The conversation, to my surprise, moved into a PR conversation about how the Trump team would position this and what they could say about this. I don’t remember any questions about, “So what are they going to do next; how might we stop it? What’s the future look like? Because we’ll be custodians of the security of this country.” There was none of that.

It was all, “What can we say about what they did and how it affects the election that we just had?”

Comey left the door open for the Mueller investigation, saying it was possible that Trump had obstructed justice.
However, despite his fervent criticisms, Comey said Trump should not be impeached but should face a vote by the American people in the 2020 election.

You cannot have, as President of the United States, someone who does not reflect the values that I believe Republicans treasure and Democrats treasure and independents treasure. That is the core of this country. That’s our foundation. And so impeachment, in a way, would short-circuit that.

This was no comfort to Trump, who spent Sunday morning firing off five tweets of insult and disparagement.

I never asked Comey for Personal Loyalty. I hardly even knew this guy. Just another of his many lies. His “memos” are self serving and FAKE!

Slippery James Comey, a man who always ends up badly and out of whack (he is not smart!), will go down as the WORST FBI Director in history, by far!