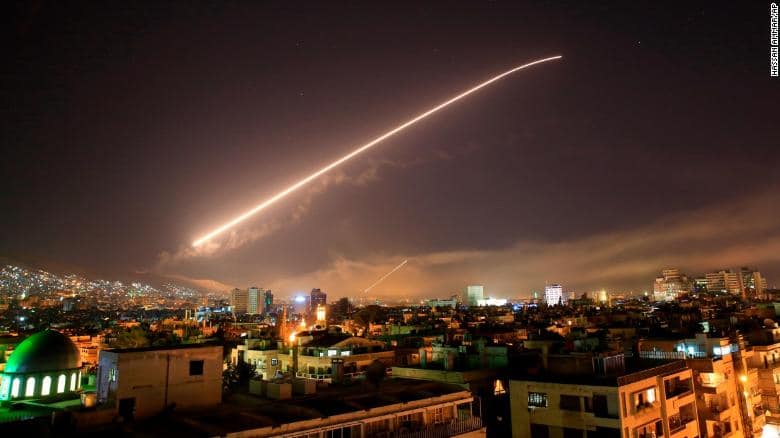 UPDATE 1945 GMT: The Pentagon has given a a breakdown of the missile strikes.

UPDATE 1545 GMT: The Organization for the Prohibtion of Chemical Weapons says it will continue with a visit to Douma and chemical attack sites.

The OPCW has already been limited in its investigation by Russia, which has blocked any attribution of responsiblity and whose personnel reportedly moved into the sites soon after the attacks to remove or disrupt evidence.

The Assad regime’s outlets are accompanying the OPCW visit with more propaganda trying to divert from last weekend’s chemical attacks. SANA repeats a story that it also tried last month, before the regime’s use of chlorine and a stronger agent:

During canvassing operations in the towns which were cleared from terrorism in Eastern Ghouta, Syrian Arab Army units found a large a lab for making toxic materials and workshop for manufacturing shells in Aftris area.

The Pentagon says a Russian “disinformation campaign” has already begun over the U.S.-led airstrikes in Syria.

Pentagon spokeswoman Dana White noted earlier Saturday that “there has been a 2,000% increase in Russian trolls in the past 24 hours”, in part to spread misinformation and disinformation around the Assad regime’s chemical attacks and the international response.

UPDATE 1430 GMT: Lt Gen Kenneth McKenzie, the director of the US Joint Staff, said not a single missile was intercepted by Assad regime defense.

He said that the regime’s air defense was “remarkably ineffective”, firing only after the US attack had ended.

McKenzie told reporters that the US believes there were chemical weapons and nerve agents stored in the military facility in Barzeh, near Damascus, which was struck this morning.

Interesting tidbits on Barzeh:
1. Thought to be one of two main CW R&D facilities in Syria
2. Was not initially declared to OPCW in 2014
3. OPCW conducted two rounds of testing at Barzeh and Jamrayah facilities in 2017 . 8/

The general said attacks were designed minimize any fallout through dispersal of chemicals into the air.

McKenzie said “as of now” the US not aware of any civilian casualties.

UPDATE 1330 GMT: Donald Trump has proclaimed success via Twitter — using the same phrase that George W. Bush used to announce victory in Iraq on May 1, 2003:

A perfectly executed strike last night. Thank you to France and the United Kingdom for their wisdom and the power of their fine Military. Could not have had a better result. Mission Accomplished!

UPDATE 1255 GMT: Russia’s latest claim is that 71 of 103 US-UK-French missiles were downed by the Assad regime’s air defenses.

Col. Gen. Sergei Rudskoi of the Russian military said the strikes had not caused any casualties and Assad regime military facilities suffered only minor damage.

Rudskoi said Russian advisers had spent the last 18 months completely rebuilding the regime’s air defence system, and said the high number of intercepted rockets spoke to “the high effectiveness of the weaponry in Syria and the excellent training of Syrian servicemen prepared by our specialists”.

The Assad regime’s military prefers a count of 110 missiles and the assertion that “most” were intercepted.

The US-UK-French targets included two major military complexes — described by the Assad regime as “research facilities” — in Damascus, a third near Homs, and five military bases and depots used by elite army divisions in southern Damascus.

Some of the targets have been struck in the past by Israeli operations.

UPDATE 1245 GMT: Bashar al-Assad has spoken by phone with his ally Iran.

State media said Assad told President Hassan Rouhani that the airstrikes will only increase Syrian resolve to fight terrorism” which is supported by Western countries.

Rouhani reaffirmed Tehran’s commitment to the Syrian regime, according to Assad’s office.

Syrian State media show people walking around a crater which it claims was caused by one of the US-UK-France missiles.

UPDATE 1230 GMT: UK Prime Minister Theresa May has set out the reasons for British involvement in airstrikes.

May emphasized the Assad regime’s responsibility for last Saturday’s chemical assault on Douma — “No other group could have carried out this attack” — and its record since 2013 of using sarin and chlorine:

This must be stopped. We have sought to do so using every possible diplomatic channel. But our efforts have been repeatedly thwarted both on the ground and in the United Nations.

Russia’s Vladimir Putin said the strikes without a UN Security Council mandate are an “act of aggression against a sovereign state” and a “violation of international law”, and asserted that the US, Britain, and France were “prompting a new wave of asylum-seekers from Syria and the whole region”.

Putin did not refer to Russia’s 12 vetoes at the Security Council preventing action against attacks on civilians, nor did he discuss any responsibility by the Assad regime and Moscow in displacing millions of Syrians.

UPDATE 0710 GMT: Russian and Assad regime outlets are putting out wildly conflicting claims about the strikes.

The Russian news agency RIA, in contrast to the initial claim of about 30 missiles, is now asserting, “over 100 cruise missiles and air to ground missiles were launched by the air and sea missile carriers of USA, France and the UK”.

Sputnik claims the “majority” of the missiles were intercepted. The Russia Defense Ministry, continuing to say the advanced S-400 air defense system was not needed, said Assad forces repelled the attack with Russian-made S-125, BUK, and S-200 missiles.

Syrian State news agency SANA says three civilians have been injured. It does give a bit of concrete information, identifying two of the targets as a military facility in Barzeh, near Damascus, and military depots near Homs.

BREAKING: Less than 2 hours after the bombing ending, celebrations have begun in the Syrian capital Damascus in defiance of the US-led strike. pic.twitter.com/EiXwqkoGW3

State TV has reinforced the message that all is well by showing Assad arriving at his office for work, repeating the caption, “A Morning of Steadfastness”.

ORIGINAL ENTRY: The US, UK, France have launched airstrikes “on targets associated with the chemical weapons capabilities”.

The attacks on three sites, just before 4 am local time, were in response to the Assad regime’s two chemical attacks a week ago on Douma, in East Ghouta near Damascus.

As Donald Trump announced the operations, explosions were heard in Damascus, Homs, and other locations. A US official said the attacks were on multiple targets and included Tomahawk cruise missiles.

UK Prime Minister Theresa May said, “We would have preferred an alternative path. But on this occasion there is none.” She assured that the attacks were not about “regime change” or “intervening in a civil war”, but were to “deter the use of chemical weapons”.

It was "right and legal" to take military action in Syria – UK PM @Theresa_May makes statement on #SyriaStrikes https://t.co/YNqSuaT2e0 pic.twitter.com/jQk1YGo5Xb

President Emmanuel Macron confirmed France’s involvement, saying Paris could not tolerate the normalization of the use of chemical weapons. The French Defense Minister said operations targeted three sites and Russia was informed beforehand. Twelve missiles were fired from a frigate in the the eastern Mediterranean and from Rafale aircraft based in France.

Gen. Joseph Dunford, the chairman of the US Joint Chiefs of Staff, confirmed that the three targets were chosen to minimize the chance of Russian casualties: “We specifically identified these targets to mitigate the risk of Russian forces being involved, and we used our normal de-confliction channels — those were active this week — to work through the airspace issues and so forth.”

However, he denied that US tipped off the Russians of the incoming attacks: “We did not do any coordination with the Russians on the strikes, nor did we pre-notify them.”

Defense Secretary James Mattis said the US attacked only with conclusive evidence that the Assad regime used chlorine in the Douma attacks and that it may have also used sarin.

The head of NATO, Jen Stoltenberg, said, “I support the actions taken by the United States, the United Kingdom and France….This will reduce the regime’s ability to further attack the people of Syria with chemical weapons.”

UN Secretary-General António Guterres urged members to “show restraint in these dangerous circumstances” and to “avoid any acts that could escalate the situation and worsen the suffering of the Syrian people”:

As it has done repeatedly with Israeli attacks on military positions, Syrian State TV claimed air defences shot down several missiles. The SANA news agency declared, “The tripartite aggression is a flagrant violation of international law.”

The Russian Ambassador to the US, Anatoly Antonov, focused on the effect on President Vladimir Putin:

pre-designed scenario is being implemented. Again, we are being threatened. We warned that such actions will not be left without consequences.

Insulting the President of Russia is unacceptable and inadmissible.

Russia’s Defense Ministry tried to deflect questions as to why advanced S-400 air defense systems had not blocked the attacks, saying no US or allied missiles had entered Russian defense zones.

The other essential ally of the Assad regime, Iran, said through Foreign Ministry spokesman Bahram Qassemi:

The United States and its allies have no proof and, without even waiting for the Organisation for the Prohibition of Chemical Weapons to take a position, have carried out this military attack…and are responsible for the regional consequences.

A senior pro-Assad official, probably from Hezbollah, said “all [targeted] military bases were evacuated a few days ago”, and maintained that a third of about 30 missiles had been shot down.

The Syrian opposition, activists, and analysts all expressed concern that the strikes would have little effect on the wider regime-Russian conventional bombing which has killed many tens of thousands of civilians and contributed to the displacement of millions.

Opposition leader Nasr al-Hariri said, “Maybe the regime will not use chemical weapons again, but it will not hesitate to use weapons the international community has allowed it, such as barrel bombs and cluster bombs.

Message received in Syria from Washington, London & Paris: We find one type of your crimes to be (mildly, theatrically) punishable. So stick to your others, like the proper militarized nations we deal with and tolerate, per routine.

Mohammad Alloush, a senior official in the Jaish al-Islam rebel faction which was forced to capitulate in Douma after last week’s chemical attacks, tweeted: “Punishing the tool of the crime but allowing the survival of the criminal is a farce.”