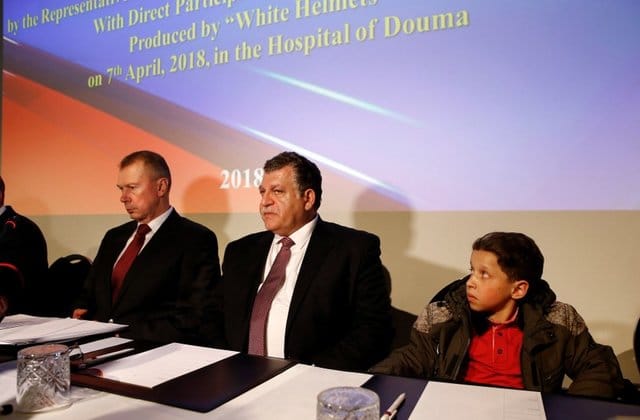 Amid claims of pressure and coercion, Russia parades people from Douma to deny chemical assault

In the highest-profile display in its campaign to sweep away the April 7 chemical attacks on Douma, near Syria’s capital Damascus, Russia has brought more than a dozen residents to the headquarters of the Organization for Prohibition of Chemical Weapons in The Netherlands.

Russia has already blocked the OPCW from attributing responsibility for the two assaults, confirmed by local doctors, first responders, residents, and citizen journalists to have been carried out by helicopters of the Assad regime. Russian personnel reportedly moved into the sites soon afterwards to remove or disturb evidence. And, while OPCW inspectors were delayed from reaching Douma until this week, Russia, the Assad regime, and supporters pursued a loud campaign to proclaim — at different times — that there was no chemical attack at all, that rebels carried out a “false flag” attack, that White Helmets rescuers staged the incidents, and that British agents were responsible.

The OPCW had criticized Russia for not allowing inspectors to speak with the Syrians before they were displayed on Russia State TV in prime-time broadcasts. However, with OPCW inspectors now trying to assess the cause, using what evidence may remain in Douma and biological samples from survivors and the deceased, Russia defied the organization with the presentation to try and pre-empt any findings from the investigation.

The Syrians included several medical personnel, who all put out the storyline that the rumors of a chemical attack — which never occurred — were fed by White Helmets rescuers who shouted “Chemicals!” — as victims of a non-chemical incident were brought into Douma’s main hospital. The personnel claimed that the victims were suffering from dust inhalation from shelling, as pro-Assad forces tried to take over the last town in East Ghouta, held by the opposition since 2012.

“Unknown people started creating chaos, and pouring water on people. We were specialists and we could see there were no symptoms of the use of chemical weapons,” said a physician named as Khalil, who said he was on duty in the emergency care unit.

He said all patients were sent home that night, in contrast to footage confirming scores of deaths and witness reports — including from doctors at the time of the attacks — of about 85 fatalities and hundreds of injured.

Thursday’s Russian-organized accounts were offered against the backdrop of Russian military personnel taking doctors and medical staff to Damascus for questioning. The medics were warned of arrest and/or effect on their families if they did not deny the chemical attacks, according to multiple local sources.

Russia also presented 11-year-old Hassan Diab, who was seen in a video on the night of the attacks, crying in the hospital as he was treated. Diab and his father were subsequently taken by the Russians to the Syrian Arab Army Officers’ Club in Damascus, where they gave the preferred story of a non-existent attack and blame on the White Helmets for inciting hysteria.

On Thursday, the Syrians gave brief statements. Their answers to questions were limited, as Russia’s envoy to the OPCW, Alexander Shulgin, did almost all of the speaking.

“After this briefing, no one would have a shadow of a doubt who distributes fake news and who is waging an information war,” Shulgin said.

Reporters noted that none of the Syrians gave any account of events beyond the hospital, including at one of the site, a residential building where at least 35 people were killed.

We have absolutely no concrete evidence that these indeed are the people that were at the site and that there is truth to this.

The witnesses had very similar statements in how they described things, but no documentation was provided with reference to their identification at all.

It’s quite difficult to see how this would have been intended to make anything clear because we’re really left with more questions than answers to this whole situation and that’s only something the OPCW can resolve with evidence from the ground.

The US, Britain, France and other countries boycotted the conference, calling it “nothing more than a crude propaganda exercise” and an “obscene masquerade”.

Turkey Presses New US Secretary of State Over Manbij

Turkey has put immediate pressure on the new US Secretary of State, Mike Pompeo, demanding the withdrawal of Kurdish forces from Manbij in eastern Aleppo Province.

Turkish Foreign Minister Mevlüt Çavuşoğlu saw Pompeo on the sidelines of a NATO summit in Brussels, only a day after the Secretary of State’s confirmation.

He said the two sides agreed a roadmap for a joint working group but then laid down Ankara’s demand:

We will implement the Manbij model in other parts of Syria, particularly east of the Euphrates. We’ll therefore be taking a step with the U.S. on an issue that causes tension in our bilateral ties. If the roadmap is implemented, the [Kurdish militia] YPG will be withdrawn from Manbij. Otherwise we’ll have to intervene against the terrorists just like we did in Afrin.

Mattis: US Withdrawal from Syria Would Be A Mistake

In the latest sign of pushback against Donald Trump’s call for withdrawal of US forces from Syria, Defense Secretary James Mattis has told legislators that departure would be a mistake.

Since Trump told rallies last month of his plans for the US to “get out” of the country, the Pentagon has pushed back by leaking plans to the media for an increase, rather than a decrease, in deployment. The head of Central Command, Gen. Joseph Votel, has said US forces are needed for stabilization in the fight against ISIS — even as Trump froze $200 million in funds for the task, and asked Saudi Arabia to take over by giving $4 billion.

Mattis said the US plans to expand its efforts in the Middle Euphrates Valley, alongside the Kurdish-led Syrian Democratic Forces and French special forces, to remove the last Islamic State pockets.

On Wednesday, Votel said the US will welcome contributions in forces, equipment or funding from Middle Eastern allies, but he suggested that contributions by Arab nations had not been finalized and said that new forces would require time to hone their operations.

“We’ve got a very experienced team on the ground that’s been orchestrating this for a couple of years. It would be difficult for someone to immediately step in and replace us, but certainly with time and experience, or maybe a little different situation on the ground, perhaps they could do that,” Votel asserted.

The latest pro-Assad airstrikes in northwest Syria have destroyed a girls’ school and knocked out the only health center in a town in Idlib Province.

Activists said housing centers in Idlib can receive no more wounded and sick people, with many towns left without any functioning health facilities.

“The situation in the northern governorate of Idlib remains catastrophic, with almost 400,000 people displaced since mid-December, in addition to tens of thousands who were displaced from the south, including Eastern Ghouta,” the UN Assistant Secretary-General for Humanitarian Affairs, Ursula Mueller, told the Security Council on Wednesday. “There are simply no more sites or shelters available for the vast majority of new arrivals. There has been a 25% increase in Idlib’s displaced population than a year ago.”

Pro-Assad forces suspended an offensive into southeast Idlib Province in January as they redeployed forces to overrun East Ghouta near Damascus. However, airstrikes and shelling have continued in Idlib and in neighboring northern Hama Province.