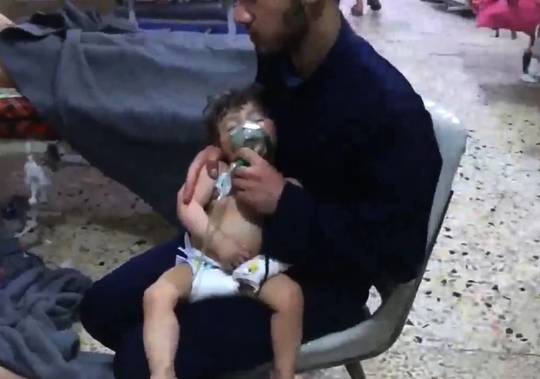 UPDATE 1545 GMT: Inspectors from the Organization for the Prohibition of Chemical Weapons have been further delayed in reaching Douma, after a UN risk assessment team came under fire on Tuesday.

The team returned to Damascus. There were no casualties.

The risk assessors encountered a large crowd and then came under gunfire and heard an explosion, said the UK envoy to the OPCW Peter Wilson, quoting the organization’s chief Ahmet Uzumcu.

The area was under the control of Russia’s military police, who took over after the capitulation agreement, a day after the chemical attacks.

Uzumcu reportedly said that it is now unclear when the team — already held up by the Assad regime since its arrival in Damascus last Saturday — can go to Douma.

An “official close to” the Assad regime said the UN team was met by protesters demonstrating against last Saturday’s missile strikes by the US, UK, and France.

We condemn the shooting incident at a team from #OPCW this is a criminal act and efforts for concealment of evidence, in an area where all armed groups have left and handed over completely, as per terms of agreement. #Syria #Duma #Chemicalwepons

The Assad regime continued to stall on Tuesday over a visit by inspectors to the sites of two chemical attacks near Damascus on April 7, even resorting to the lie that the team from the Organization for the Prohibition of Chemical Weapons had reached Douma.

State news agency SANA put out the false information, which was circulated by many mainstream outlets. But the OPCW did not confirm the arrival of the team, held up in Damascus since Saturday, and US State Department spokeswoman Heather Nauert said, “Our understanding is that the team has not entered Douma.”

Finally, the Assad regime’s UN ambassador Bashar al-Ja’afari walked back the line, saying it was a “UN security team” that had traveled to Douma. He said the inspectors would finally be allowed into the town on Wednesday.

Regime officials have cited “security issues” to continue the delay of any inspections, even as they allowed journalists into Douma on Monday.

Russia has already limited any inspection by barring attribution of blame, and Russian personnel reportedly removed and disturbed evidence from the sites soon after the regime’s attacks.

French officials said Tuesday that it is “very likely” that evidence has disappeared.

Up to 85 people were killed and hundreds were wounded in the April 7 attacks with chlorine and a stronger agent. The assault forced a capitulation agreement with rebels, confirming the forced displacement of thousands of people from Douma to northern Syria.

Mohammed Alloush, a senior official of the rebel faction Jaish al-Islam, claimed on Tuesday night that Assad forces are digging up graves in a search for the bodies of victims, hoping to remove them before the OPCW inspectors can test for chemical exposure.

A former senior officer in the regime’s chemical weapons program, Brig. Zaher al-Saket, said Douma residents with whom he worked had buried up to 50 bodies in an undisclosed site in the area.

The head of the White Helmets civil defense, Raed al-Saleh, confirmed on Wednesday, “We have handed to the fact-finding mission of the OPCW all the information we gathered about the chemical attack, including the exact burial place of the victims.”

Douma medical staff and the head of the largest medical relief agency in Syria have bolstered reports that medics in Douma have been threatened by Russian personnel and subjected to “extreme intimidation” by Assad regime officials who seized biological samples, forced them to abandon patients, and demanded their silence.

Dr. Ghanem Tayara, the director of the Union of Medical Care and Relief Organisations, said doctors have been told that their families will be at risk if they offer public testimony about the April 7 chemical attacks.

Last weekend local activists said several doctors had been taken by Russian personnel for interrogation and warned that they would be arrested if they did not make the appropriate statements about the attacks, denied by both Moscow and the Assad regime. The Russian State outlet Sputnik soon featured medical personnel who questioned reports of the two assaults, and British journalist Robert Fisk also posted an account from a local doctor blaming dust from shelling for the casualties.

A number of doctors who spoke to London’s The Guardian said intimidation has increased since last week, as the Assad regime faced a possible visit to Douma by the OPCW inspectors.

Tayara, who is based in Turkey and supervising the departure from Syria of some of the Douma medics, said:

There has been a very heavy security presence on the ground ever since the attack and they have been targeting doctors and medics in a very straightforward way. Any medic who tried to leave Douma was searched so vigorously, especially for samples. At one medical point, seven casualties were taken away. The Russian military police were heavily involved. They were directing things.

They were looking through their WhatsApp messages and phones. The doctors were treated abusively and have been threatened ever since. Their families have been threatened that they will pay a price and they themselves have told they will be arrested, and much more if they give any evidence, or interviews about what happened in Douma.

Tayara said the medics saw symptoms in patients pointing to a stronger chemical agent than chlorine, with “convulsions, foaming” and something that had affected the central nervous system”.

He said the death toll is likely to be higher than estimates of between 40 and 70.

A Douma doctor told the Guardian:

Our colleagues who appeared on television [to deny the attacks] were coerced, because some hadn’t served in the military or completed their degree, and for other reasons, some had family in Damascus. They decided to stay in exchange for being reconciled with the regime. But the regime used them.

A medic who treated victims echoed:

Anyone who has knowledge of what happened cannot testify. What was being said is that the medical centres would be destroyed on top of those working in it.

The testimony of people under pressure cannot be relied on. Imagine if you spoke out while under the control of those that you were speaking out against, what will your fate be?

And another doctor said:

We were receiving threats since the siege began, prior to the chemical weapons attack. When the attack took place, things became much more dangerous. They’re wiping out evidence that would prove the crime, and they are forcing doctors and residents who are witnesses to say that nothing took place.

US: Strong Chemical Agent Used, But Not “Absolute Certain” It Was Sarin

US intelligence and defense officials have said that, while they assess that a chemical agent stronger than chlorine was used by the Assad regime in the attacks on Douma, they do not have “absolute certainty” that it was sarin.

The officials said the decision to proceed with missile strikes last Saturday was based on “a standard of evidence” accepted by the intelligence community. However, the strikes were limited in part because the absolute confirmation of sarin had not been obtained.

It’s a hard, long process, especially in an attack like this without physical access to victims, site. Therefore we had to work with closest allies quickly to ensure we had confidence in the intelligence picture, enabling policymakers to choose best course of action.

After midnight, 1 civilian was killed and 3 others injured, after 3 brutal air raids targeted a popular market in #kafranbil city in #Idlib countryside. White Helmets teams worked to help the wounded, and continue the rescue operation. pic.twitter.com/3TajpmIwCM

Russian bombing has diminished after a pro-Assad offensive took part of southeast Idlib over the winter, before redeployment to the East Ghouta front; however, periodic attacks have continued.

Leading Senators have expressed concern about the Administration’s approach to Syria after a classified briefing.

“I am very unnerved by what I’m hearing and seeing,” said Sen. Lindsey Graham, a Republican, who said the briefing on the strikes made him more worried. He cautioned that the administration is “going down a dangerous path”, without offering details.

Other Senators appeared to be worried that Trump will pursue his desire for a withdrawal of US forces, despite opposition from the Pentagon. Democrat Chris Coons told reporters:

The only thing worse than a bad plan on Syria is no plan on Syria, and the President and his administration have failed to deliver a coherent plan on the path forward.

Bob Corker, the chair of the Foreign Relation Committee, expressed resignation, “Syria is Russia and Iran’s now. They will be determining the future. We may be at the table, but when you’re just talking and have nothing to do with shaping what’s happening on the ground, you’re just talking.”

Asked if he felt the Administration should take more military steps, Corker said:

Trump has said for weeks that he wants US personnel to “get out”, asking Saudi Arabia for $4 billion to cover the withdrawal and take over stabilization efforts in northern Syria. The response to the Assad regime’s chemical attacks on April 7 near Damascus raised the prospect of a reversal, but the White House said earlier this week that Trump is still committed to withdrawal — albeit with the escape clause that it will be after the Islamic State is defeated.

Lawmakers of the House of Representatives, after their own briefing, said there was little discussion about a broader strategy for addressing the Assad regime, or about additional military or diplomatic efforts.

We certainly did get additional insights into the targeting of the facilities, what we knew about it, what we know about the [Assad regime’s chemical] attack itself, what these facilities were used for, what actions if any took place between the time the President announced we were going to strike and when we did strike, so we got an additional granularity.