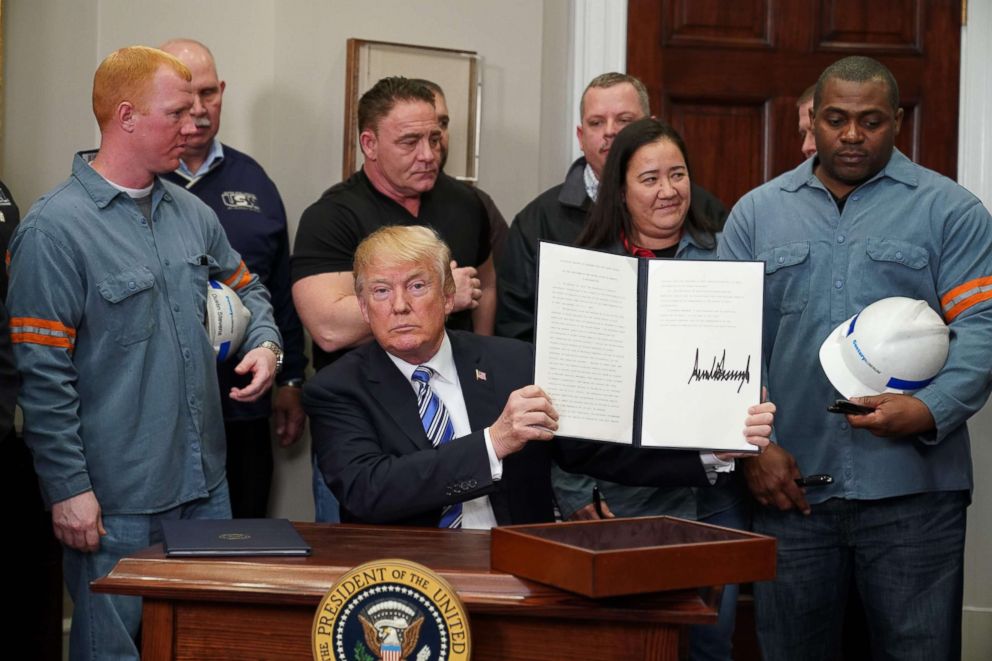 Trump: “Betrayal is now over”

Developments on Day 414 of the Trump Administration:

See also Podcasts: How US is Stumbling Into a Trump-Kim Meeting
Podcast: Why Tillerson in Africa Points to US in Difficulty
Korean Surprise — How a Trump Meeting with Kim Jong-Un Was Confirmed

Donald Trump signs orders for tariffs on steel and aluminum, but in a sign of uncertainty amid protests from Republicans and US allies, changes course on exemptions.

After Trump’s sudden decision on February 28 to impose the 25% duty on steel and 10% on aluminum — made without preparation of the measures and legal vetting — White House advisor Peter Navarro and Commerce Secretary Wilbur Ross insisted that there would be no exceptions, even for the most seriously affected US allies: Canada, South Korea, Japan, and Germany.

However, legal advisors soon said that imposition of the duties on Canada and Mexico would violate the North American Free Trade Agreement, forcing Trump to exempt those two countries yesterday — and Trump indicated that more exemptions could be made for other countries on a case-by-case basis.

Because the tariffs are being introduced under a little-used US provision for “national security” — another possible point of contention if cases are taken to the World Trade Organization for resolution — Trump said, “The actions we are taking today are not a matter of choice; they are a matter of necessity for our security.”

Joined by a handful of steel and aluminum workers, Trump said of the measures, taking effect in 15 days, “Our factories were left to rot and to rust all over the place; thriving communities turned into ghost towns. That betrayal is now over.”

Trump did not refer to the effect of higher prices for US businesses using steel or the rift with Republicans and within his Administration, with top economic advisor Gary Cohn announcing he will soon resign.

Chrystia Freeland, Canada’s foreign minister, called the initial exemption a “step forward” but said it would not change Canada’s negotiating approach to NAFTA. Mexico said talks would not be subject to conditions outside the negotiating process.